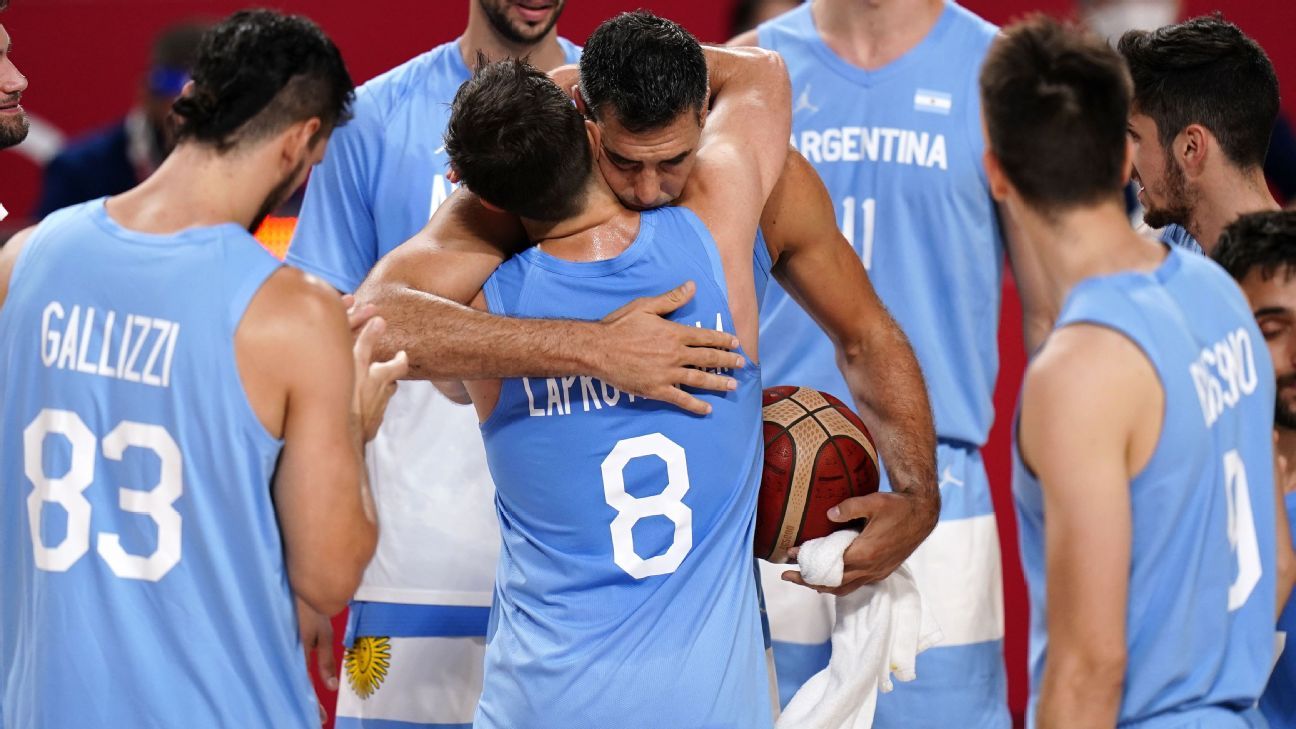 Luis Scola hides his tears as best he can. Facundo Campazzo wraps him in a hug and cries with him. Patty Mills, Joe Ingles and Brian Goorjian applaud from a distance. It’s a devastating scene wherever you look at it: Australia has scored almost 40 points from Argentina, but nonetheless nobody says anything about it. It is not that he does not want to, what happens is that he cannot: what Scola has done for his country in the last two decades has been so great that he is himself a gold medal. An aspiration towards what it is intended to be.

The weather is now theatrical. A libretto drawn from fine dramaturgy. The lights dim and the spotlight rests on the blue number 4. With no public present, it is the teammates, the rivals, and the officials in Tokyo 2020 who recognize the crossing of the Rubicon. The passage from player to legend, the farewell that seemed impossible to assimilate. The game, in regulation, is still played, there are 51.4 seconds left, but in reality it has stopped playing a long time ago. Scola, true to his style, tries to take the emotion out of the moment, to rationalize it, but this time it will be impossible. There will be no way around the emotional crossover. “I’m leaving in peace,” he says. Silence. He takes the ball and with a tired step he walks away: he does not know it yet, but with that walk he builds an epic image that will travel the world. An imaginary bridge to eternity.

The captain of the Argentina basketball team said goodbye after the loss to Australia in the Tokyo 2020 quarterfinals. Applause and excitement in Japan, after an indelible legacy

Argentina wakes up today with a feeling of pain, of absence, that it had not experienced for years. An orphan country of an unparalleled sports leader. Luis Scola has been, in short, the father par excellence of Argentine basketball, because that is how his actions have marked him throughout his career. What is the first thing a parent has to do? Be. Always, without exceptions, without excuses, without shortcuts. And Scola was, even in times when it seemed like darkness was just around the corner. In danger, in the latent possibility of hitting head-on against a wall, Scola charged with the equipment. He did not flinch, he put what had to be put and kept the flame burning so that those who came after him understood that there is a way to do things. He listened, taught, protected and guided. He worried like no one ever had.

The Argentine basketball family will forever owe him a debt.

Scola has also been a line of conduct. A unique glue between two generations, an example of having to be that many times, in its journey, it was uncomfortable for whoever stood in front of it. Right or wrong, he was always upright with himself and with others. Severe when necessary and docile when the situation warranted it. Scola taught habits and provoked customs. Many times he swallowed poison inside and taught that triumphs are not always necessarily sporting. That the long road is worthwhile, that shortcuts are a deception of the moment, that sometimes you lose and sometimes you win. He, who won the Olympic gold, who could have shown off without exposing himself, always put his hands on fire for others. Even at the risk of burning, because it is there, at that moment, when the nature of a person is naked before the world. In danger of losing something, be it money, time or prestige. Scola played it for his teammates, for his country, and also for us. I do not think there is greater merit than that for an athlete of his career.

Scola leaves the Argentine National Team and shows that he is much more than titles and medals. He is a gentleman of the game, with all that that means. A leader who accompanies until the last breath, because his goodbye is in the way of the greats. With just the right measure of people he pays: like a general in battle, he sacrifices himself for the rest. Even knowing his limitations, he put on his chest the entire tournament and will do it one more time. He does not allow, in the emotional finale, to punish his teammates, his coaching staff, those who accompany him. Leave it to me, I can also handle this. And then, the world, accustomed to being ruthless, does not speak of elimination, of what was missing, or of what will come: it stays with the great captain and his legacy. Like it or not, there is Luifa again, sitting, with his hand raised, asking without speaking that they look at him to avoid the bad drink to his companions. To his children, to his friends, to his people. Doing what a parent has to do: take responsibility for the moment, carry the inks no matter what. With whatever and against whoever comes.

And here we are, recurring beggars of emotions, diners at the most elegant basketball tables in the last two decades, hurt by the end of an era but proud to be heirs of a message that will last in time: there is only one way to do it. things and is to do them well. It is allowed to fall, but it is mandatory to get up. You have to work hard and dream big, like when he designed the 2019 China runner-up in his head against all odds. Believe and fight for a goal. Chase impossible. Never give up. With honesty, respect and responsibility.

More guys like Scola are needed around these lands. That they avoid the trap and show that success requires time and methodology. Let them assume less than the one next door if necessary. Tell the truth. Do not hide or look for excuses. That they teach that genuine things require a long term and that miseries are only conquered in the short term. Today I prefer to avoid talking about his triumphs and choose his attitude in defeats. Scola showed that he is capable of making mistakes and apologizing. We can start over if necessary. There is always an opportunity out there to go find it. Knowing how to win is as important as knowing how to lose. Scola, the father of the basketball team in Argentina, will no longer play in the national team.

The man, then, gives way to the legend.