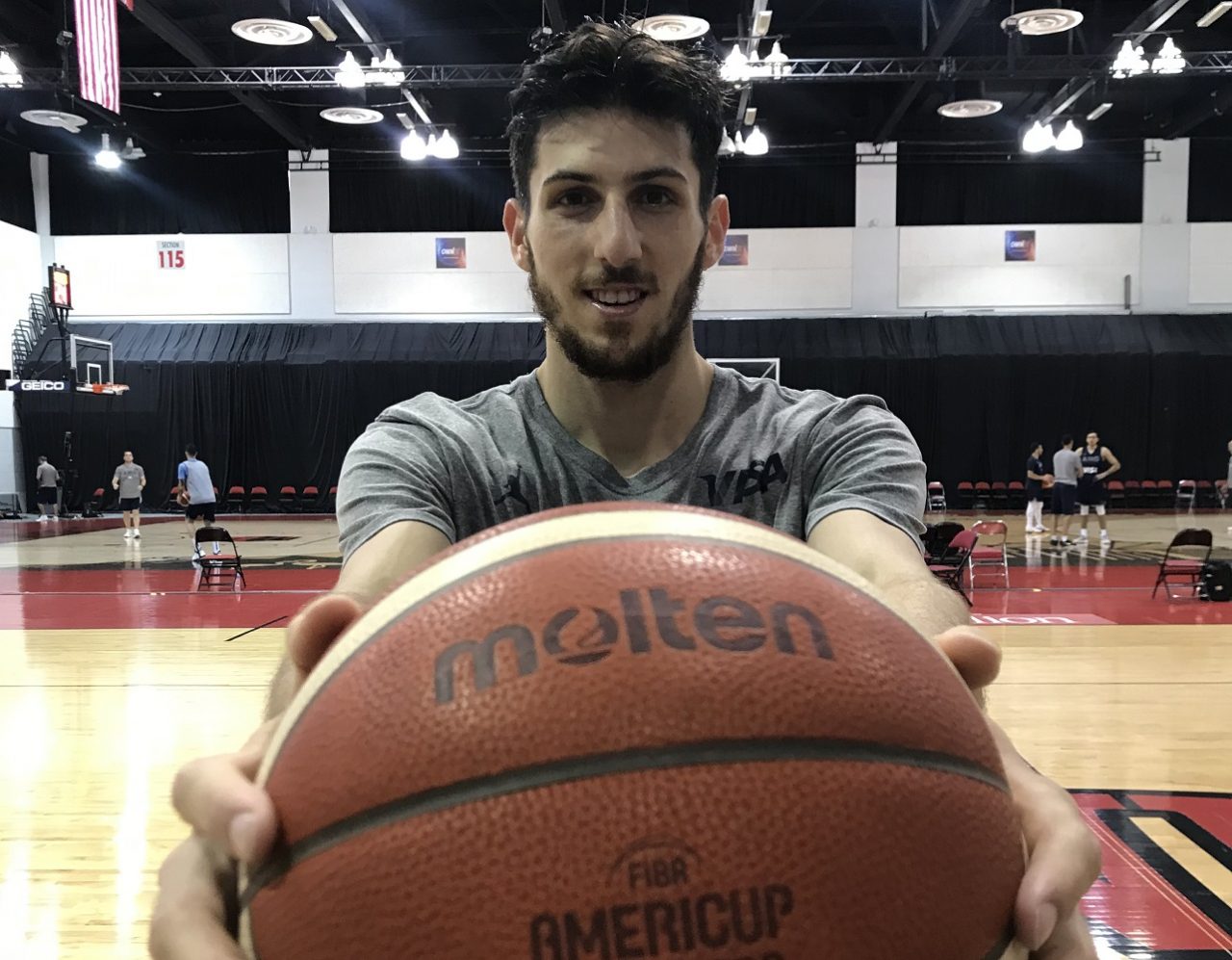 “Normal speed, Bolmaro, that’s Usain Bolt speed.” The witty and funny phrase by Sergio Hernández serves to illustrate these early days of Leandro in the National Team. The 20-year-old from Cordoba started off to the bottom in this Olympic qualifier, in Las Vegas, showing off a marked versatility, dynamics, speed and courage. The player who “most surprised” Campazzo, no less.

“It’s a little animal,” Facu threw in practice after Bolmaro stole a ball in the middle of the field. On the return, in another pressure, Lea again forced a loss and FC7 approached to touch his head and say something in his ear. “Yes, he told me well, very well, I continued like this …”, admits the perimeter multifunctional with his usual shyness. “That beasts like this recognize you generates a huge motivation to continue giving everything. I’m really working very hard to make things work out and having respect for them is brutal, not to mention if the one who tells me is Facu ”, he completes with a smile in a relaxed dialogue with Prensa CAB.

For Lea, it is Campazzo who speaks so well of him, in public and in private, is special. “I always saw him, since I was little, but when I started playing base, he began to be my reference. I watched his videos and paid attention to how he covered the ball, whether he was going to steal or not, what he did when they passed him, I was learning from every detail that I saw, because for me everything was new in the position, ”he reveals.

Two years ago, Bolmaro arrived at the concentration in Bahía Blanca, prior to the Pan American Games and the World Cup. Some thought of it as a first experience for him, but he made it clear in those days. “I came to show that I can stay in the team,” he said. And he was not far from achieving it… “It’s true, I felt that it could have been and I was really looking forward to it. Now I hope it is different ”, he acknowledges.

Off the court, Bolmaro is very calm and exhibits a marked shyness but his behavior and manner of being contrasts with what he shows on the parquet. “And it is a bit like that. Outside I am calm and on the court, not so much (laughs). I notice that change, when the training or the game begins I am another. And that competitiveness brings out the best in me. I feel that I improve and make others better ”, he reveals. And then he tells an anecdote from his athletic days that reflects that characteristic. “Once, in an Argentine combined events championship that was held in Santa Fe, I signed up as always in Hexatlon (NdeR: there are six tests) and a boy I did not know from Buenos Aires appeared and beat me… I looked bad, I remember . I was leaving athletics, it was my last moments, but I decided to sign up for the next one, in Decathlon (10 rounds), a specialty that I didn’t do as much just because I wanted to beat it. I went and did it, ”he recalls. Thus, despite the fact that he was very good (“Especially in high and long jump, but also in 110 hurdles and bullets,” he says) he retired in peace from athletics, at the age of 16, to dedicate himself fully to basketball. Thus our sport won a jewel.

Lea avoids talking about the impact she has caused in these first eight days of practice. “It’s part of what I always do. Pressing, running, defending, causing mistakes ”, he says and laughs when he is reminded of Oveja’s phrase that shows the most gait he seems to have. “Yes, I do notice it a bit, but it is also true that I am somewhat over-energized, of lapses, that sometimes I don’t control. I must learn that, control the rhythms and my dynamics to better reach the end of training. I have to regulate the loads and not spend everything at every start ”, he explains.

-Tell people what you found in this return to a major Argentine preselection.

-They received me very well, they are all very nice, they never leave you out and they are always integrating you. They care about everyone, so that we are united and that harmony outside we can take it to the field. Luckily, I had had this experience in 2019, I had been able to integrate and, also, in the season I had been talking to many of them. They are great people and I value that very much. Because there is also a question of following his step. Being so young, I already know the path to follow based on the example they give me.

-The first days are difficult for the new ones. You don’t seem to have felt anything, not to suffer that classic adaptation.

-A bit. I was watching videos and studying how the team played and I came trying to fulfill a role, seeking to contribute what I can. What touches me, touches me. And I really haven’t been nervous. I arrived without fear and focused on giving my best to earn a place. And the key is that you enjoy. Because when that happens, I play better.

-You feel that you have one more gear and that, together with your versatility and multi-functionality, falls right for this team that tries to empower Oveja, seeking to be even faster and more aggressive than in China.

-Yes, a bit. It is a bit my characteristic and I love this style, the one of running, pressing, putting one more change … Although, in reality, we all feel comfortable with this proposal, because we feel that it is the way we can take advantage. It was already shown in the World Cup that playing like this we can beat anyone.

-How crazy what happened to your position in Barcelona. You started as a forward, you rose to fame as a shooting guard but the injuries occurred at Barsa and you began to play as a base no less than a giant in Europe.

-Yes, really (laughs). When I found out that I was going to start playing point guard, I watched videos of various point guards to understand the position, especially Facu (Campazzo). Luckily, thanks to my teammates, I had the confidence and that made me feel more comfortable and confident that I could do it. It wasn’t that difficult because I think I got engaged. Before I was complaining, but when this happened, I changed the chip and accepted the role. The train passes once, they say, and I had to seize the opportunity.

-But weren’t you surprised to start playing grassroots at an elite level and perform so well for a first time?

-Yes, sure, a little surprised me. But I think it was due to what I said: accept it and train a lot to be ready. If I hadn’t worked so hard, I would have gone wrong. The effort I put in to comply paid off.

-At times it impacts you to see yourself in defense, because of your movements, speed and especially the size you have. Are you comfortable?

-How did you feel about what happened in Final 4. You had been playing but averaging 25 minutes in the two most important games of the year. What did you feel?

-Yes, Final 4 was really an incredible experience. I played without thinking that they were such important games and I feel like I helped the team. Too bad we were left without the title, but we had a great rival in front of us. For my part, it helped me to be patient and wait for my moment. At first I didn’t play anything and then a little more until I finished like this.

-I mean, you didn’t make excuses or blame anyone when you weren’t playing, you tried twice as hard to be ready. –

Sure. When I realized that it was not enough, I went for more. I adjusted meals, breaks, and workouts. I think that, from the bad, I converted something good and time ended up proving me right.

-Before Las Vegas, because of its present rather than your future, you seemed to have a fairly probable place in Tokyo but now, after the first training sessions, the certainty is greater. I don’t know if you feel that way.

-For that I train (laughs). In a preselection like this, for an Olympic Game, nobody gives you anything and if I stay, it will be because I did very well. In 2019 I was close, but it is not that today I feel among the 12, I can believe that it can be, that I can be a part if I do things well.