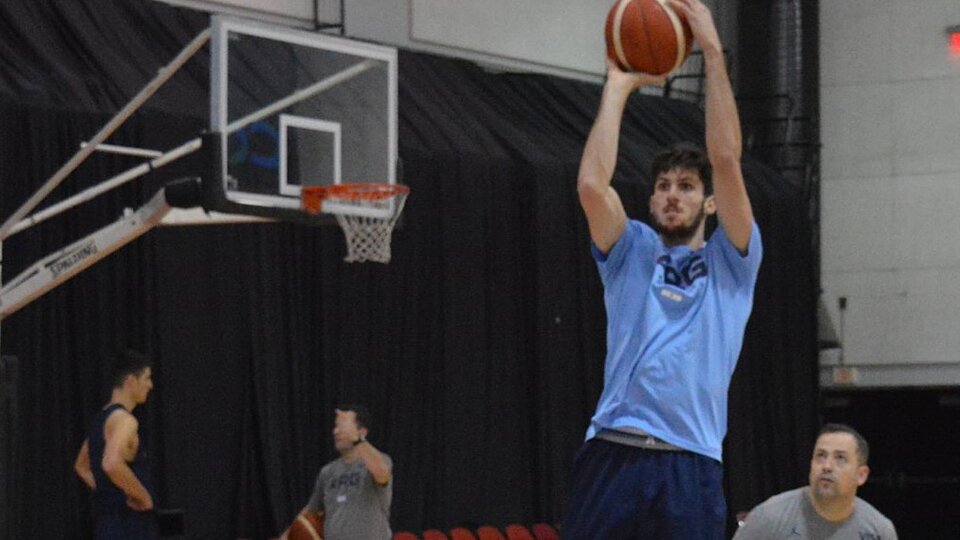 “Normal speed, Bolmaro, that’s Usain Bolt speed!” The witty and funny phrase by Sergio Hernández serves to illustrate these days of Leandro in the National Team. The 20-year-old from Cordoba started off to the bottom in this Olympic qualifier, in Las Vegas, showing off a marked versatility, dynamics, speed and courage. The player who “most surprised” Campazzo, no less.

“It’s a little animal,” Facu threw in practice after Bolmaro stole a ball in the middle of the field. On the return, in another pressure, Lea again forced a loss and Campazzo He reached over to touch her head and whisper something in her ear. “Yes, he told me ‘good, very good, I continued like this’ …”, admits the multifunctional perimeter with his usual shyness. “That beasts like this recognize you generates a huge motivation to continue giving everything. I’m really working very hard to make things work out and having respect from them is brutal, not to mention if the one who tells me is Facu. I am living a dream ”, completes the Barcelona player with a smile.

Off the court, Bolmaro is very calm and exhibits a marked shyness but his behavior and manner of being contrasts with what he shows on the parquet. “And it is a bit like that. Outside I am calm and on the court, not so much (laughs). I notice that change, when the training or the game begins I am another. And that competitiveness brings out the best in me. I feel that I improve and make others better ”, he reveals. And then he tells an anecdote from his athletic days that reflects that characteristic. “Once, in an Argentine combined events championship that was held in Santa Fe, I signed up as always in Hexatlon (NdeR: there are six tests) and a boy I did not know from Buenos Aires appeared and beat me… I looked bad, I remember . I was leaving athletics, it was my last moments, but I decided to sign up for the next one, in Decathlon (ten tests), a specialty that I did not do so much just because I wanted to beat it. I went and did it ”, he recalls in dialogue with Prensa CAB. Thus, although he was very good, he retired in peace from athletics, at the age of 16, to dedicate himself fully to basketball. And the sport of orange won a jewel.

-What did you find in this return to a preselection?

-They received me very well, they are all very nice, they never leave you out and they are always integrating you. They care about everyone, so that we are united and that harmony outside we can take it to the field. Luckily, I had this experience in 2019 (it was out of the final cut for the World Cup), I had been able to integrate and, also, in the season I had been talking to many of them. They are great people and I value that very much. Because there is also a question of following his step. Being so young, I already know the path to follow based on the example they give me.

-You feel that you have one more gear and that, together with your versatility and multi-functionality, falls right for this team that tries to empower Oveja, looking for it to be even faster and more aggressive than in China …

-Yes, a bit. It’s a bit of my characteristic and I love this style, the one of running, pressing, putting one more change into it. Although, in reality, we all feel comfortable with this proposal, because we feel that it is the way we can take advantage. It was already shown in the World Cup that playing like this we can beat anyone.

– What madness what happened in Barcelona. You started as a forward, you rose to fame as an escort but injuries occurred at Barça and you began to play as a base no less than a giant from Europe …

-Yes, really. When I found out that I was going to start playing point guard, I watched videos of various point guards to understand the position, especially Facu (Campazzo). Luckily, thanks to my teammates, I had the confidence and that made me feel more comfortable and confident that I could do it. It wasn’t that difficult because I think I got engaged. Before I was complaining, but when this happened, I changed the chip and accepted the role. The train passes once, they say, and I had to seize the opportunity.

-And in defense, do you feel comfortable?

-How did you feel about what happened in the Final Four? You had been playing but you started to average 25 minutes in the two most important games of the year.

-Yes, the Final Four was really an incredible experience. I played without thinking that they were such important games and I feel like I helped the team. Too bad we were left without the title, but we had a great rival in front of us. For my part, it helped me to be patient and wait for my moment. At first I didn’t play anything and then a little more until I finished like this.

-Before Las Vegas, because of your present rather than your future, you seemed to have a fairly probable place in Tokyo but now, after the first training sessions, the certainty is greater …

-For that I train (laughs). In a preselection like this, for an Olympic Game, nobody gives you anything and if I stay, it will be because I did very well. In 2019 I was close, but it is not that today I feel among the 12, I think it may be, that I can be a part if I do things well.