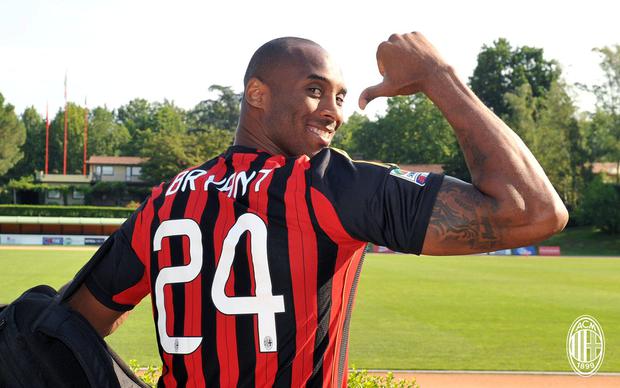 The legend of Kobe Bryant still alive. Despite the fact that she left this world two and a half years ago, ‘Black Mamba’ is still remembered -incessantly- as the great sports icon he managed to become with an orange ball in his hands. Today, August 23, Kobe would already be turning 44 years old and there is no better date than precisely this to continue evoking him in all his dimension. In fact, the idol of the Lakers always managed to transcend beyond basketball, and that is why he is recognized and revered in practically all sports in the world. But with the sport with which he had a special closeness was soccer. The historic ’24’ of the NBA never hid his passion for football.

LOOK- Is it fair that Messi is not a candidate for the Ballon d’Or? Reasons that explain that it could be an error

It was normal for Kobe to see him in the air conquering the world with the ball in his hands. However, it was no problem for him to plant himself on the ground and carry the ball at his feet. His love for football led him to meet cracks of the stature of Ronaldinho, Lionel Messi, Neymar, among others. With them he was able to feed his passion for a sport that he began to film when he lived in Italy as a boy.

From 6 to 14 years old, bryant He lived in the country of the boot with his family, because his father Joe played his last seasons as a professional basketball player in that league. The idol of the Lakers thus breathed that football atmosphere that is distilled through Calcio and quickly began to play it in the streets, with friends. “I have Rossonero blood, I am a pure Rossonero”he said in clear reference to his fandom for AC Milan.

He completely fell in love with soccer as much as he already was with basketball. “I played soccer and then I played basketball, and then I played soccer again and then basketball. And so it went on for eight years.told in an interview for ESPN. However, since it was not a very popular sport in the United States at that time, the ’24’ dedicated himself only to basketball when he returned to North America, but he never abandoned his passion for the game. AC Milanand for ‘soccer’ in general.

What he learned in soccer allowed him to forge a unique style in basketball. The rest is history. Kobe became a true legend in this sport. All his success is summed up in five championships of the NBA18 times in the All Star, two MVP in the finals, an NBA MVP and two Olympic gold medals.

On the tragic Sunday of January 26, 2020, in the city of Lille, an hour after hearing the news that mourned the entire sport, Neymar he stopped from 12 steps to score PSG’s second goal. It did not fail. He hugged his companions. Then, he looked towards the cameras and with his hands drew the number 24, in honor of Kobe’s glorious number. Then, he finished the dedication by looking up at the sky and pointing at it. huge gesture.

The Brazilian star paid tribute to him on a pitch. Others couldn’t. At the time, stars like Cristiano Ronaldo, Lionel Messi, Luis Suárez, among others, had to use his networks to dedicate a few words to him. Everyone in shock.

It is no accident. Bryant made good friends with soccer players, like Ronaldinho. They both admired each other a lot. Even, thanks to the Brazilian, Kobe was able to meet Messi.

“When Barcelona came to Los Angeles some time ago, Ronaldinho, who is a friend of mine, told me: ‘Look, Kobe, I’m going to introduce you to the player who is going to be the best of all time,’ ‘How? If you are the best player,’ I told him. ‘He’s going to be better,’ he told me. And it was Lionel Messi.”told for an interview with ESPN.

Since then, Kobe became a staunch fan of Messi. Both have exchanged compliments and have been able to share moments together, such as conversations or the famous recording of a commercial for a Turkish airline. The five-time NBA champion even invited the Argentine star to train for a week with the Lakers, while he would train with Barcelona. Ultimately, this could not be done.

The American joined the football fever in the World Cups in South Africa 2010 and Brazil 2014, where he marked his presence. It was also normal to see him in Barcelona training. He couldn’t put that delusion aside. And when he wanted to compare himself with footballers, the names of Messi, Cristiano and Neymar were not lacking.

“It’s the first time I’ve seen Neymar personally, although I’m hearing excellent things about him. I have known Messi for a long time, his ability to play decisively and objectively absolutely every time he has the ball is incredible. Cristiano Ronaldo also seems to me simply spectacular. I think all of them see the sport as I see it.”he said in an interview for FIFA, in the framework of the 2013 Confederations Cup.

Although his love for basketball was above all else, Kobe He could never separate himself from football. His link with the king of sports has been very intense and this has been demonstrated by all his statements. The phrase that most sums up his passion was said precisely at the 2013 FIFA Confederations Cup, when he was very attentive to all the teams and the cracks that shone like Neymar, who was the best player in the tournament

“The passion for football is on another level. Arriving here, you can immediately see the eagerness of the fans to show that they are there to represent their team or their country. We only see that in the NBA from time to time, in the playoffs for the title or in the finals. Not in soccer. It `s a religion. As I grew up in Italy, from a very early age I saw first-hand how that passion is lived in a very intense way”he expressed.

And Kobe did not resist being ‘contaminated’ by the passion for the beautiful game, which continues to worship one of its most emblematic fans.

So great is his bond with football that the historic player of the Lakers, together with the Vanessa Bryant Family Foundation (KVBFF), founded the Mamba FC, a youth women’s soccer club located in Irvine, California, which is dedicated to promoting the women in this beautiful sport. This women’s team has played in the Coast Soccer League since 2015 and almost always stands out, obviously guided by the winning mentality that distinguished Kobe.

That is the great legacy that ‘Black Mamba’ leaves to football and sport in general. If it were up to him, he would have played on a basketball court and, at the same time, in the football pitch. He wouldn’t have a problem. Quite the contrary. But of course that is impossible.

Still, Kobe never shied away from soccer beyond his exclusive responsibilities as an NBA star. His relationship with this sport was always close. And surely from above he continues to enjoy AC Milan matches and also a star like Lionel Mesi, with whom he forged a great friendship.

Meanwhile, in the earthly world -ours-, everyone continues to remember him with great affection, even more so on his birthday. The 44. And it is that Kobe will live eternally in the hearts of those who were able to enjoy her talent. And is not for less.

Kobe Bryant, a 44-year-old legend: How was the relationship of ‘Black Mamba’ with football?