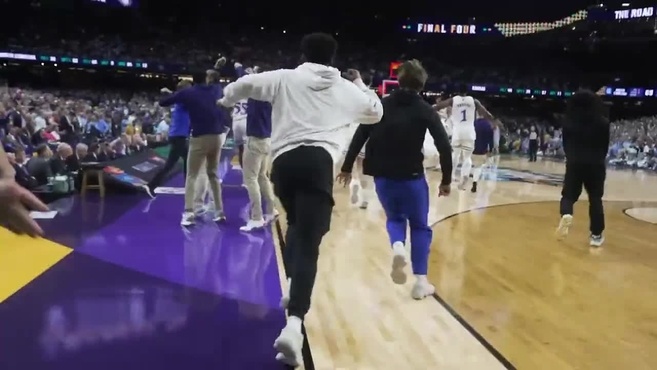 The University of Kansas win this monday fourth NCAA men’s college basketball national title by defeating in the final North Carolina down 72-69 after going losing by 16 points in the first half. It’s about the biggest comeback in a men’s final of the NCAA in all history. The previous record was 1963 in the final that Loyola Chicago I beat Cincinnati after trailing by 15 points.

David McCormac (15 points and 10 rebounds) was fundamental in the close outcome of the match for Kansas, in which they also highlighted Jay Wilson (15 points), Remy Martin (14 points), Christian Braun (12 points and 12 rebounds) and ochai agbaji (12 points), ultimately chosen best player in the final four.

Kansas began commanding and overwhelming North Carolina’s attack with its defense (11-4 with 15:35 remaining). However, North Carolina reacted with the help of Armando Bacot to tie the game (22-22 with 6:08 left in the first half).

Two 3-pointers by Brady Manek launched North Carolina even more, intractable in those last six minutes of the first half with a crushing 3-18 run against a Jayhawks without answers. The Tar Heels went on to win by a maximum of 22-38 and reached the break with a comfortable lead (25-40) thanks mainly to their rebound dominance (18-27) and the second chance points (2-18).

Kansas had no time to waste after the restart and, greatly improving their defense and running on the counterattack, they struck fear into North Carolina’s body (38-45 with 15:40 to go). They continued rowing hard the jayhawkswhich with Christian Braun and David McCormack pulling the cart put even more pressure on a stiff Tar Heels (45-46 with 12:07 remaining).

With the game completely even until the final stretch, Armando Bacot sprained his ankle at the last minute and had to leave the match, David McCormack landed two providential hooks for Kansas and Caleb Love missed the triple that would have forced overtime.