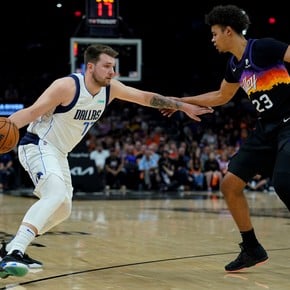 There are some who affirm that in life everything is written and that destiny is unalterable. Those who support this theory will be glad to hear the case of Ja Morantone of the stars that at 22 shines in the NBA and that was discovered thanks to a packet of potato chips! Hard to believe?, Ole tells you his story.

It was the month of July of the year 2016 when james kanea Murray State University scout, traveled more than seven hours from Kentucky to Spartanburg High School in search of Tevin Browna player from whom good references had come to him and he was determined to continue.

However, while waiting to see the teenager, hunger played a trick on him and forced him to go buy a bag of chips. On his way, the noise of a bouncing ball made him stop his antennae and direct his attention towards the secondary courts.

There was a game being played 3 vs. 3 Y there was a boy who showed a different talent from the rest and he dazzled with pure basket and assistance, with a speed above the average of his type. Obviously, this led Kane to question who was that little boy who was making her small.

“Temetrious Morant”, the organizer of the exhibition told him. Although, of course, it was also made clear that everyone knew him as Ja, he lived in Dalzell (a small town in South Carolina) and that his father came to play with Ray Allensecond highest three-point scorer in NBA history and two-time champion in the american leaguewho was also born there.

The next day, the scout returned to the Spartanburg High School gym to watch Ja play a game. 5 vs. 5. Just a few minutes were enough for him to realize that the boy was destined to do something great. Kane called Murray State University coach Matt McMahon to invite him to see the budding talent.

He soon began to make himself known in the world of college basketball: he was the first player to average at least 20 points and 10 assists in a single season. He so impressed in that universe that a rival coach described him as follows: “It’s a cross between John Wall and Chris Paul.”

He was born in Dalzell, a small town in South Carolina. (AP)

His arrival in the NBA

So good was his performance there that in 2019 He was chosen in the second position of the Draft by Memphis Grizzlies and already in his first season in the NBA he was named rookie of the year. Later, on May 26, 2021, he scored 47 points in a playoff game against Utah, becoming the first Grizzlies player to reach that number in the postseason and the second youngest (21 years and 289 days) to score more than 45 points in that instance. This year he repeated that record again in the recent match vs. Warriors.

In his first season he was named rookie of the year. (AP)

Currently, Morant, who in January of this year was chosen to play his first All Star Game, is the undisputed leader of his team and has a goal between eyebrows: give Memphis its first NBA ring. Last season they reached the Eastern Conference quarterfinals, where they lost to the aforementioned Utah after beating Golden State in the playoffs.

morant vs. Curry at the All Star. (AP)

In this 2022 his team has already improved on last year’s performance and is in the Eastern semifinals, in which they draw 1-1 against the Warriors of Stephen Curry. This Saturday, from 21.30 (ESPN) the series will have its third chapter.

How are the rest of the series going?

In addition to Memphis vs. Golden State, in the West they also play phoenix vs. Dallas. The Suns put on the series 2-0 After his recent win by 129-109 in which the Mavs were not reached by 45 points from Luka Doncićwho although his hand was hot, did not play a good game on the defensive side, since on his side they penetrated more than once Devin Booker (30 points) and Chris-Paul (28). Today they repeat in Dallas from the 22.30 (ESPN)

In the East, Miami (2), Conference leader in the regular stage, defeated philadelphia (0) for 119-103. The Heat leaned on the 23 points from Bam Adebayo and the 22Jimmy Butler. The 76ers, who did not have Joel Embiid, fought with the 34 points from Tyrese Maxey.

Butler was one of the figures of Miami vs. Philadelphia. (AFP)

Also, in the remaining series, milwaukee and Boston tie 1-1. After two home games for the Celtics, the series will go to the Fiserv Forum. The defending champion Bucks have on their roster Luca Vildozathe only Argentine still alive in the fight for the title.

Luca Vildoza and a postcard from his NBA debut with the Milwaukee Bucks jersey.

Ja Morant, NBA crack that they discovered for some fries