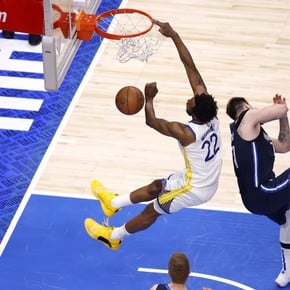 After the triumph of Warriors in Texas 109 to 100, the series for the Western finals is almost defined and Dallas will need a miracle to reverse the 3-0 against. As if condiments were missing, in the third game, the rivalry between Stephen Curry Y luka doncic, figures of both teams, ceased to be exclusively in scoring and stung.

After a first quarter where those from San Francisco managed to take the lead by three (25-22), parity came in the second and there the clash between the stars. The situation it happened when there were 2.01 minutes left for the break and the game was led by the visit 43 to 42. Stephen Curry threw a triple without looking, which he accompanied with several mocking gesturessomething that the Warriors point guard repeated throughout the series.

The mockery about the Dallas team provoked the anger of the Slovenian, who is already known in the league for his temper towards his rivals and his complaints towards the referees. As soon as the minute whistle, Luka went to the visitor’s bench to rebuke Steph and make his statement face to face. about gestures towards the public in his home.

A riot quickly broke out on the field and several players from the Mavericks They jumped to stop their teammate, even the Dallas coach, Jason Kidd He was there to calm the waters. Luka exchanged words with Curry and later with Draymond Greenwho responded with gestures and faces to the Wonder Boy.

The Golden State point guard finished with 31 points and 11 assists.

The one who had really unleashed the ire of the Slovenian had been the Mexican Juan Toscano-Andersonwho was selected by Steve Kerr to make a personal mark on Luka during the second quarter. Toscano had gone overboard with the point guard from Dallas, which made Doncic very angry and he went to rebuke him in the minuteand that’s where Steph jump to defend the rookie.

Luka Doncic was dispatched with 40 points and 11 rebounds, although it was not enough for Dallas to win.

Finally, after the requested minute, the point guards of both teams talked on the field and the game was able to continue, with Dallas taking that second quarter 25-23 and going into halftime just one point down (48-47), with 21 points from Doncic in that first half.

after the game, Doncic commented the following: “There are people who ask too much of me. It’s my 4th year in the NBA and my first Conference Final. I am 23 years old and I still have a lot to learn“.

Doncic taunted Curry with a 3-pointer

That was not the only rigorous situation among the star guards. At the end of the first quarter, Luka took a rebound with 4.1 seconds game and after a great run, where he got rid of Curry and Poole, He threw a three-pointer close to half court which he hit and lowered the difference to only three points, 22-25. The Slovenian celebrated that triple shot in Curry’s face with a dancesimilar to what the American point guard did in game one of the finals in La Bahía.

Finally, Doncic’s 40 points and 11 rebounds were useless given his team’s lack of effectiveness Y Golden State stayed match point to be the conference champion and advance to a new NBA Finals from 2018/19. The next game is this Tuesday, May 24 at 10 p.m.again in Dallas.

It stung between Curry and Doncic