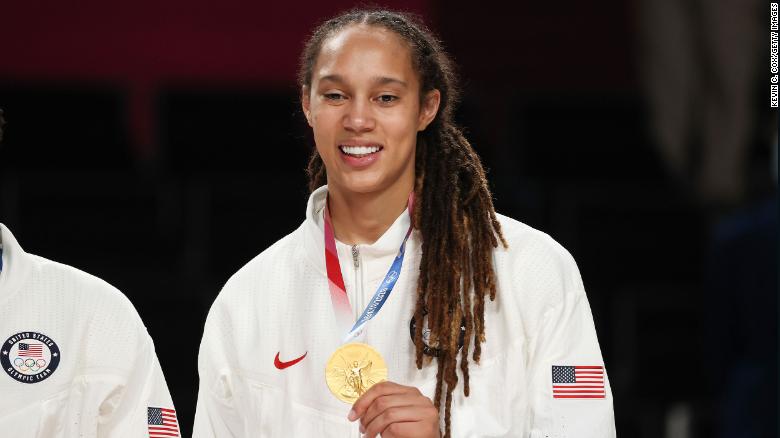 (CNN) — When Jonathan Franks first heard that American basketball star Brittney Griner had been detained in Russia, his initial feeling was disbelief.

But it was not disbelief over the fact that she had been arrested on charges of possession of some cannabis oil at an airport near Moscow, but rather over the fact that some Western media broadcast the details of her alleged crime as if it was a fact.

Franks was immediately suspicious because he has worked on behalf of numerous citizens Americans who have unexpectedly found themselves in similar situations with hostile governments. He is currently the campaign spokesman for Trevor Reed, detained in Russia since August 2019.

Based on the meager information provided by the Russian Federal Customs Service and state media, Franks is very concerned about the predicament Griner is now in.

“This has many overtones of being a very unjust and arbitrary detention,” he explained. “The video from the Russian customs service seemed strange to me. They are parading her in front of the cameras. The mugshot photo was completely unnecessary and absurd.”

Brittney Griner, #42 of the Phoenix Mercury, during the first half of the WNBA game at the Footprint Center on August 31, 2021 in Phoenix, Arizona.

The Russian Customs Service claims Griner “smuggled significant amounts of narcotic substances” and says a criminal case is underway. A possible sentence of 10 years in prison was mentioned.

“They’re making her look like a drug lord. I think it’s unlikely that Mrs. Griner will get a fair trial,” Franks concludes, “because no one gets a fair trial in Russia. It’s a rigged game.”

In 2014, Iranian-American journalist Jason Rezaian was arrested in Tehran. He could not know it at the time, but he had a long stay ahead of him in the notorious Iranian prison of Evin: 544 days.

The Washington Post journalist was finally released in January 2016, and in Griner’s case he sees many parallels to his own. “This is the most audacious hostage taking you can imagine by a state,” Rezaian told CNN.

“I know from my own case that the alleged accusations against me were not based on anything resembling reality, and were used to perpetuate a narrative about why I was being held.”

“I think that every time journalists repeat that narrative, we are doing some of the kidnappers’ dirty work for them. My attitude is that Brittney Griner is innocent of any crime until the world sees otherwise,” Rezaian adds.

Brittney Griner celebrates with fans after Game 2 of the 2021 WNBA Finals at the Footprint Center on October 13, 2021 in Phoenix, Arizona.

It is not yet clear when Griner was arrested in Russia, but it was sometime in February, when she was returning from the United States to compete with UMMC Ekaterinburg in the Russian basketball league.

It’s Griner’s seventh season in Russia, where he plays during the North American offseason. News of his situation did not reach the United States until March 5, when Russia revealed that he was holding her.

Only then did Griner’s wife, Cherelle, start writing about it on Instagram. “There are no words to express this pain,” she said. “I am suffering, we are suffering.”

If she can indeed be classified as a “hostage,” Griner will join an unenviable club of more than 50 or so American citizens who are currently being held hostage or wrongfully detained abroad.

Activists have been working to free Americans Reed and Paul Whelan, who are in Russia.

While acknowledging that Griner’s family has been under enormous emotional stress, Rezaian believes they should have talked sooner.

“They made the same mistake that I see others make over and over again, allowing the would-be kidnapper to take control of the narrative,” says Rezaian.

“Unfortunately, we see people saying to themselves, ‘This is all a big mistake that’s going to go away in a few days.’ Removing your detention isn’t doing you any favors, these things don’t magically work themselves out.”

Team USA’s Brittney Griner #15 drives to the basket against Team Japan during the first half of the women’s basketball final match on day sixteen of the Tokyo 2020 Olympic Games at Saitama Super Arena on 8 on August 2021, in Saitama, Japan.

The timing of Griner’s arrest could not be worse, as she was arrested on the eve of the Russian invasion of Ukraine and became public only after the United States began sanctioning the Russian government.

“You can’t separate these things from each other,” Rezaian explained. “Attempting to maintain diplomatic niceties around these situations may be in the US national security interest, but it is certainly not in the interest of Brittney Griner.”

Rezaian urges Griner’s family to speak up and encourages their American employers to make noise.

Griner is a two-time Olympic champion, a seven-time All-Star with the Phoenix Mercury, and a legend in the women’s professional league, the WNBA. Although her team and her league have issued brief statements, Rezaian says they could and should do much more.

“The WNBA, which is part of the NBA, one of the biggest and most powerful sports leagues in the world, has a real responsibility to this person,” he says. “There should be a strong response.”

Brittney Griner takes a selfie with her teammates from the United States team and their gold medals during the women’s basketball medal ceremony on day sixteen of the Tokyo 2020 Olympic Games at the Saitama Super Arena on June 8. August 2021, in Saitama, Japan.

In the information vacuum about Griner’s situation, some have tried to fill the space with comments about his relationship with Russian basketball and the wisdom of his decision to travel there at a time when geopolitical tensions in the region looked like a barrel. of gunpowder

It is a feeling that smacks of victimhood. “It’s irrelevant,” says Rezaian. “It’s not a credible argument.”

Franks is equally critical. “Would have, could, should. It’s a Monday morning quarterback game, and it’s not helpful,” he says. “She’s been welcomed into that country to work. To me, that’s pretty cheeky.”

Both say Griner had every right to continue working as a professional athlete in Russia, and the fact that a country where she was well known and celebrated has now locked her up only makes the accusations against her more suspect.

Rezaian recalls the countless trips he made in and out of Iran over a five-year period. “I never had problems until I had them,” she says. “Is that my fault? Not at all.”

It’s hard to predict what the next few weeks and months will hold for Griner, but Rezaian draws on his own experience to suggest that Griner may have to prepare for a long stay in Russia.

“It may turn out to be a marathon, not a sprint. you hope it’s a sprintbut conserve your energy in a way that benefits you throughout this ordeal,” he says.

In a podcast called “544 Days,” which he published in October 2021, Rezaian details the anxiety, uncertainty, and monotony of his detention in Iran. He says he made the audio series in part to lay out a roadmap for families of other citizens who may one day find themselves in a similar situation.

“I tried to find things to laugh at every day because there’s certainly a lot of absurdity in these situations,” he adds.

“That doesn’t take away from the horror and terror of it, but the absurdity of a great American athlete being held on baseless charges at the dawn of a cataclysmic war on the other side of the world? It’s horrific, but it’s also a farce.” in their own way”.

Brittney Griner poses with her gold medal during the women’s basketball medal ceremony on Day 16 of the Tokyo 2020 Olympic Games at Saitama Super Arena on August 8, 2021 in Saitama, Japan.

Franks knows from defending Reed that Griner could be in jail for a while.

She urges all who care about her to keep her case in the public eye.

“Sports fans can play a very important role, because I think the government [estadounidense] doesn’t listen to them,” says Franks.

“Do you want Brittney Griner to come home? Or Trevor Reed or Paul Whelan or any of the other 50 hostages? I would suggest calling the White House every day and telling them you want President Biden to make repatriation of the American citizens wrongfully detained.

Franks reiterates that Griner’s family should do the same. “You have to make a tough decision about whether to speak up or not, but shine a light,” he says. “If it were my loved one, my response would be to turn on a light. Always.

“It is the most audacious hostage taking that you can imagine by a State”, says former captive before the arrest of the US basketball player, Brittney Griner, in Russia