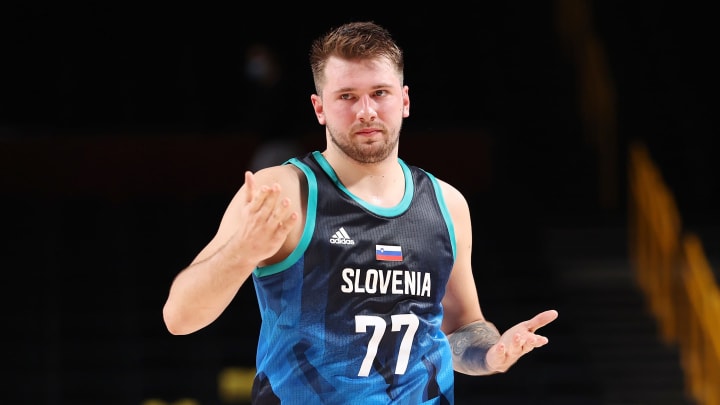 The debut of the Slovenian basketball team in the Olympic Games Tokyo 2020 was marked by the sensational performance of Luka doncic, who crushed Argentina with 48 points and led his team to win 118-100.

After the match, the Argentine coach Sergio Hernández had nothing but praise for the star of the Dallas mavericks, stating that they were destroyed by the best player in the world, which of course placed the question on basketball experts and fans: Is Doncic the best today?

First of all, its role in the NBA, since with only 22 years he is already a star of the league. He has played three seasons as the lynchpin of Dallas’ offense, maintaining a level worthy of being a candidate for the Mvp and breaking all kinds of marks.

During the most recent season he averaged 27.7 points, 8 rebounds and 8.6 assists in 34 minutes per game, which has led him to be compared to figures like LeBron James and Russell Westbrook, especially for his effect on all offensive phases of the game.

True to NBA trend, Doncic grew last season as a perimeter scorer, scoring 35% of his third-dimensional attempts and improving his shooting efficiency to the rim to a remarkable 48%. In terms of free throws, he is a player just above the league average with a 73% efficiency at seven attempts per game.

In question is his defensive ability, since despite having excellent stature to play as a point guard or guard, he has been criticized for not contributing enough in Dallas’ defense, even showing laziness at times.

However the numbers do not lie, his efficiency as a defender has improved year after year, despite the poor consistency of his team. During the 2020-21 season, he ranked 29 out of 540, as one of the players that gives his team the most wins based on defense (2.6), above players like LeBron James, Jayson Tatum and Kawhi Leonard.

This of course does not mean that he is a great defender or better in this aspect than the mentioned players, but it is a sign that his impact on the game transcends beyond what he offers as a scorer or point guard, making him a very complete player. .

His role with the Slovenian team in qualifying for the Olympic Games was brilliant, since despite playing with a minute restriction, he managed to defeat Venezuela with a triple double. This was just a preview of what he would finally do against Argentina in Saitama.

The Argentina coach is not wrong, today there is no better player than Luka Doncic and it is that in contrast to great figures like Kevin Durant and Damian Lillard, he is being able to translate his impressive performance in the NBA at FIBA ​​level, even improving in terms of efficiency and defense.

Regardless of the role that Slovenia ends up starring in at the Olympics, Doncic is one of the great stars that shines in Tokyo and if nothing strange happens, thanks to his talent he will be one of those that defines the NBA for at least the next decade.