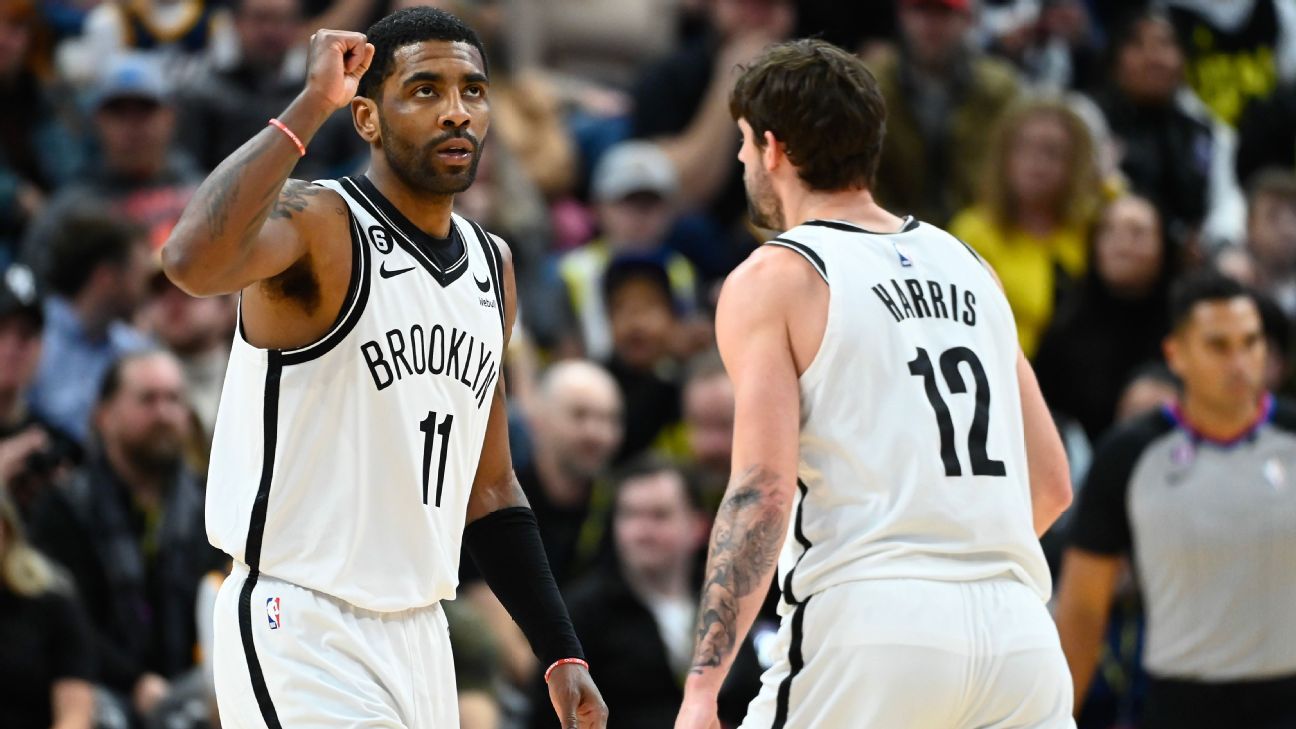 Kyrie Irving, spectacular with 48 points, revived the Brooklyn Nets after four straight losses this Friday in which they also highlighted the ninth consecutive victory of the Denver Nuggets and the surprising victory of the Los Angeles Lakers against the Memphis Grizzlies.

With 48 points, 11 rebounds and 6 assists, Kyrie Irving gave a recital for the Brooklyn Nets to add their first victory in five games without Kevin Durant.

Jordan Clarkson (29 points) was the best of the Jazz.

Without Jokic due to hamstring problems, Jamal Murray took an important step forward with the first triple-double of his career (17 points, 10 rebounds and 14 assists) to defeat an Indiana Pacers who haven’t won in their last six games. .

The Dominican Chris Duarte stood out in Indiana with 18 points, a rebound and an assist.

With a steal and a two plus one in the last minute, Dennis Schroder (19 points, 8 rebounds and 8 assists) led the Los Angeles Lakers to a great victory that ended the eleven-game winning streak of the Memphis Grizzlies.

Ja Morant added 22 points and 8 rebounds (9 of 29 on shots) in a Grizzlies team that dominated the rebounding (63 to 47) but let the victory escape in the final seconds.

Spanish Santi Aldama had 4 points and 5 rebounds for Memphis while Mexican Juan Toscano-Anderson had 3 points, a rebound and an assist for the Lakers.

The Golden State Warriors, thanks to their great success in the triples (23 of 43), took a game marked by absences (Stephen Curry, Klay Thompson, Draymond Green and Andrew Wiggins on the visitors and Donovan Mitchell and the Spanish Ricky Rubio on the premises).

Jordan Poole (32 points) led the Warriors and Darius Garland (31 points and 10 assists) did the same for the Cavaliers.

Luka Doncic fused the Miami Heat with 34 points, 12 rebounds and 7 assists as the Dallas Mavericks returned to winning ways after three straight losses.

Victor Oladipo (20 points) and Bam Adebayo (18 points and 11 rebounds) were the best of a Heat that had won four of their last five games.

Six wins in a row lead to a very creditable Sacramento Kings, who this Friday beat the Oklahoma City Thunder with a triple-double by Domantas Sabonis (18 points, 13 rebounds and 14 assists) and a great performance by rookie Keegan Murray (29 points and 14 rebounds).

Shai Gilgeous-Alexander shined with 37 points and 7 assists for the Thunder.

With an indisputable 35-19 in the last period, the Orlando Magic surprised the New Orleans Pelicans, weighed down by the absences of Zion Williamson and Brandon Ingram and who have lost three games in a row.

Franz Wagner (30 points, 6 rebounds and 9 assists) and CJ McCollum (23 points and 7 assists) were the leading scorers for the Magic and Pelicans, respectively.

The Spanish Willy Hernangómez did not have minutes in the Pelicans and the Puerto Rican José Alvarado stood out with 17 points, 4 rebounds and 4 assists.

The Atlanta Hawks seem to have gained momentum and this Friday they chained their fifth consecutive victory at the hands of Dejounte Murray (29 points, 6 rebounds and 12 assists) and Trae Young (27 points and 6 assists).

The Knicks, who suffered a 37-23 loss in the last quarter, had their best man in Julius Randle (32 points, 9 rebounds and 6 assists).

Keldon Johnson (23 points) was the highlight of the Spurs.