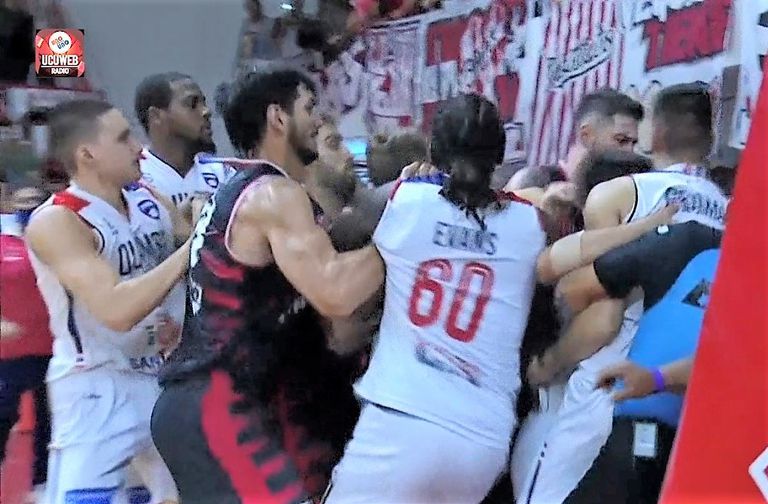 One of the National Basketball League duels played this Sunday between Institute of Córdoba and Quimsa of Santiago del Estero was clouded by Incidents that occurred between two basketball players. In the game in which La Gloria defeated Fusion at home, there was a brawl between the players Nicholas Romano and Ivan Gramajo that triggered a general fight, but that did not happen to majors.

the santiagueños lead the league with a record of 15 wins and 4 losses. His rivals, the Cordobans, march ninth with 13 hits and 10 falls. In a duel between two teams that in recent years have shown prominence in Argentine basketball, Institute defeated its rival by 88 to 83, but when the game reached the last seconds It was the moment that overshadowed the day.

With 8 seconds, 6 tenths to go, Franco Baralle had two free throws. Needing quick points he missed his second free throw. The rebound fell into the hands of the visitor. Immediately, the ball went out and went to Gramajo, who uncomfortably shot three points and went to look for rebounds. In the dispute over the ball, the player from the Santiago team hooked Romano with his arm, but without any intention. The Gloria inmate did not like the blow he received at all, He reacted and went straight to look for his adversary. As a result of that, everything ended in pushes and reactions under one of the stadium’s hoops. Several went to separate, substitutes and collaborators also entered.

The game’s commentator, Juan Carlos Meschini, warned that the match “was already bad” due to some situations that had occurred in the previous minutes. Consequently, referees Alejandro Chiti, Roberto Smith and Ariel Rosas they appealed to the repetition of television to determine if there should be sanctions. The incident it ended with the two basketball players expelled. The same thing happened with the three quimsa players Emiliano Toretta, Bryan Carabali and the American Eric Anderson who invaded the field when the clash occurred.

As for the game, Nicolás Romano was the figure of the winner. Despite being disqualified, the intern scored 18 points and had 8 rebounds. During the visit they did not reach 27 points of Franco Baralle who also took 8 rebounds and distributed 6 assists. Another of the novelties that the Cordovan night had was the return of the player Federico Elías. The Bahiense was reinstated by the leadership of the Institute, after being involved in a car accident, in which a 17-year-old girl lost her leg.

Instituto-Quimsa, for the National League: the incidents that led to the expulsion of two players