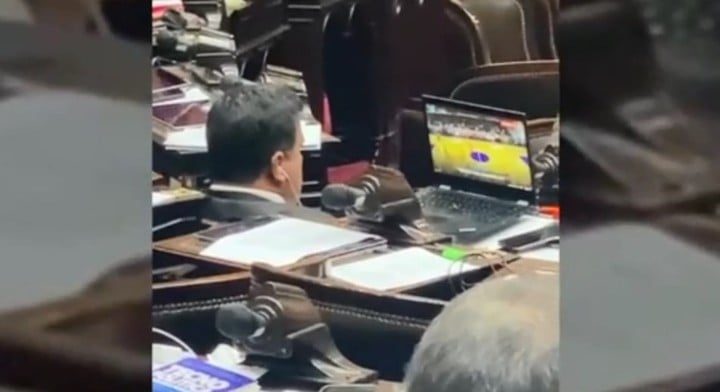 Marcelo Casaretto was filmed in the Chamber of Deputies while enjoying the victory of Echagüe de Paraná, a club of which he is vice president.

During the Tuesday’s debate on the 2023 Budget project, Marcelo Casaretto was one of the more attentive and concentrated deputies. However, the Kirchnerist legislator was not precisely focused on the presentations of his colleagues on the Law of Laws, but rather he was absorbed in front of his notebook screen not to get lost a basketball game.

Coincidentally, it occurred to him just when the club from his province, Patronage of Parana, was in danger of going to the First National. Of course, the initiative had no support. The “Patron” could not be saved and, ten days later, he was downgraded.

This Tuesday, in the midst of the debate on the 2023 Budget project, the deputy from the Front of All again generated controversy. With nothing to do now so that the institution from Entre Ríos remains in the First Division, his interest turned to Echagüethe entrerriano basketball team of which he is vice president.

Marcelo Casaretto was filmed in the Chamber of Deputies while enjoying the victory of Echagüe de Paraná, a club of which he is vice president.

The club, also from Paraná, received from 9:00 p.m. at the Luis Butta stadium to Jachal de San Juan, in what was his first home appearance in the Argentine Basketball League. A more than special event, so Casaretto did not resist and followed him live. The deputy had made use of the floor at about 3:00 p.m. Relaxation was allowed.

But Casaretto did not limit himself to watching the team of his loves intermittently from his cell phone, but also leaned his notebook on his bench and, without too much dissimulation and full screen, he began to play the game. Nor was it enough for him to follow it visually and, in order not to miss the story, until he put on headphones.

Meanwhile, it was the turn of Enrique Estévez, deputy of the Socialist Party for the province of Santa Fe, to speak. “The direction of this government is not clear and the direction of our country is not clear either,” the colleague said at about 22.25, as heard in the video where Casaretto was red-handed.

At that time, Echagüe was about to define his match and he had the full interest of his vice president, from the Chamber of Deputies.

The moment was not seen on DiputadosTV streaming: it was recorded thanks to the fact that one of those present filmed it from behind with his cell phone. It may have been friendly fire: The sector where the camera is appears to belong to his blockmates. In addition, the opposition would have been absent at that time.

Marcelo Casaretto, deputy of the Frente de Todos and vice president of Echagüe de Paraná, watched a game in Congress.

Anyway, the video it didn’t take long to go viral in social networks and generated widespread rejection. Casaretto didn’t find out about his carelessness, at least not until after the match. But not all was bad news for the deputy: Echagüe won 83-66.

In the middle of the Budget debate, a deputy K started to watch a basketball game, even with his headphones on