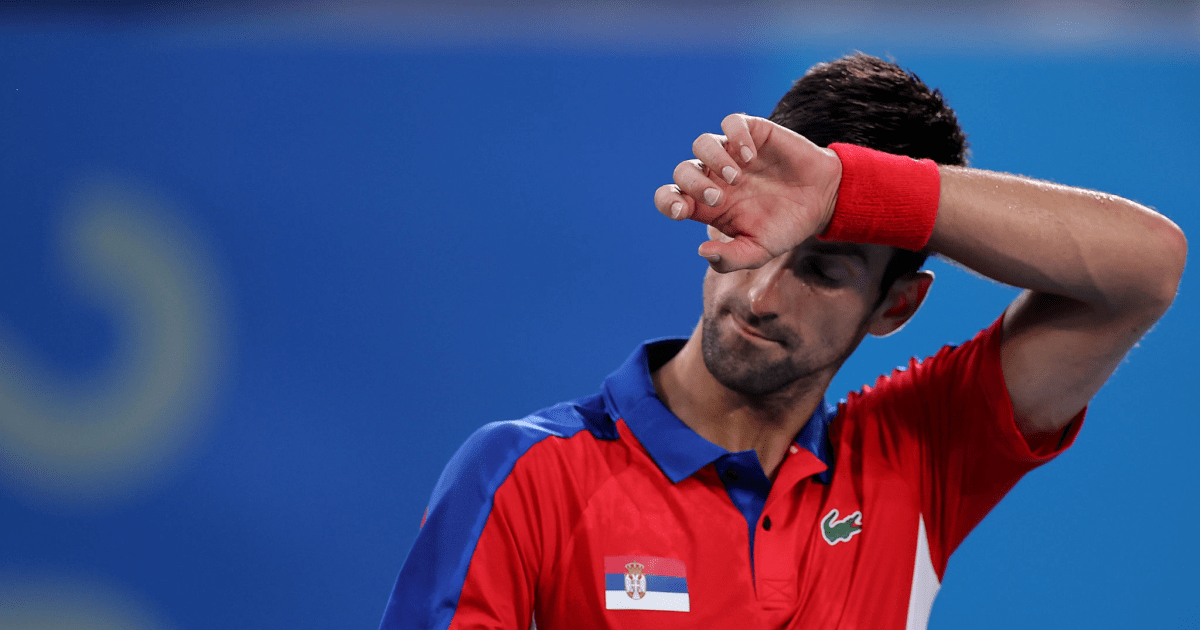 It wasn’t just the relentless sun. Or the heavy, humid, still air that sits close to the ground.

By noon, the canoe ride through artificial rapids along Tokyo Bay had turned into something that left competitors sweating and exhausted after just a minute, as if its choppy waters had come to a boil.

“It’s like taking a hot bath,” said Matej Benus from Slovakia. “Like rowing in the bath water.”

These Games were expected to be one of the hottest in Olympic history, as is happening, in addition to the passage of a tropical cyclone. Beach volleyball has looked like a sauna, and the tennis courts have become frying pans, with one player being carried around in a wheelchair and another who is said to have asked the referee: “If I die, will you do it? responsable?”.

The conditions of the equestrian center in the heart of the city have not been suitable for either man or beast.

“I felt more sorry for my horse,” said Kelly Layne, an Australian rider. “I felt that the horse was suffering.”

Temperatures of about 80 degrees with a humidity that is around 76% is common in Tokyo at this time of year. Already in the summer of 2019, dozens of people died and thousands more were hospitalized during a heat wave. Unpleasant weather is caused by both natural and global warming factors.

The high pressures on the Pacific Ocean cause that each summer the water vapor is transported to Japan by the southerly winds. This dynamic is multiplied by a phenomenon known as the “urban heat island effect”.

An estimated 15,000 miles of roads in this metropolis absorb and retain heat. Countless buildings block airflow that could otherwise cool days and nights. Like all large cities, Tokyo is significantly warmer than the surrounding areas.

“The conditions are really brutal. I have played tennis professionally for 20 years and I have never faced these kinds of conditions. “

NOVAK DJOKOVIC, ON THE HEAT IN TOKYO

During this past summer – when the Games were scheduled to take place but were postponed because of COVID-19 – the weather was unusually cool. This year has not been so lucky.

“If you are not acclimatized, heat-related illness is a life-threatening condition,” said Dr. Jonathan Finnoff, chief medical officer for the United States Olympic and Paralympic Committee. “It’s serious from a health and performance standpoint.”

In the years leading up to the Games, local organizers considered resurfacing the streets along the original marathon route with materials to protect from the heat and letting the trees along the sidewalks grow to provide more shade. Concerned for the safety of the fans, they explored the idea of ​​blowing artificial snow onto the stands.

Part of their dilemma was resolved when spectators were banned due to the pandemic. But there was still the concern for the athletes.

Like other national Olympic teams, the Australians came up with a game plan devised by their group of heat scientists and physiologists.

“Sometimes with all the focus on COVID, we can lose sight of the fact that the threat of heat has been front and center of many of our health concerns,” said David Hughes, the chief. team doctor. “But I can assure you that … we haven’t stopped focusing on the heat.”

Ice vests have become commonplace in outdoor venues, and competitors put them on as soon as they leave the field of play. Neck coolers and air-conditioned locker rooms have become invaluable as organizers hand out drinks to combat dehydration.

On a larger scale, International Olympic Committee executives were particularly concerned following the 2019 world athletics championships in Doha, Qatar, where 28 of the 68 participants in the women’s marathon dropped out despite the race taking place at midnight. .

To the dismay of the Japanese, the IOC moved the marathon and running 800 kilometers north to Sapporo, a move that could lower expected temperatures by 10 degrees. Other competitions were scheduled in the morning and evening when possible, and heat breaks were included in various tests.

When the athletes started arriving in Japan, the organizers said they were in coordination with the Japan Meteorological Agency to anticipate bad weather. Last week they had a respite when Tropical Storm Nepartak passed by north of Tokyo, with showers that cooled the situation for a few days.

Even so, conditions have been tough on the courts at Ariake Tennis Park. Spain’s Paula Badosa was unable to finish her quarter-final match, and Russian Daniil Medvedev complained to the referee.

Novak Djokovic, world No. 1 and recent Wimbledon champion, was pushing the referees to make a change.

“The conditions are really brutal,” he said, adding: “I have been playing tennis professionally for 20 years and I have never faced these kinds of conditions.”

Hours later, the international tennis federation decided to move the rest of the games from noon to the early hours of the afternoon.

At the nearby Ariake Urban Sports Park, skaters participating in the street contest took refuge under umbrellas between races.

“The sun definitely affects everything,” said Manny Santiago, from Puerto Rico. “It affects your shoes and the way your feet feel inside, because they are sweaty, much more sweaty than normal.”

American beach volleyball player April Ross explained that she and her partner Alix Klineman had trained in a sauna to prepare for Tokyo. Russian shooter Alexey Alipov said he had never encountered anything like these conditions during the men’s trap test.

“It is the first time that I have sweated to jets, literally, I have had to clean myself every three, four shots and sometimes two,” he said after finishing eighth in the men’s trap. “I had to take off my glasses and wipe the sweat.”

Not everyone is in an unfamiliar climate. Some members of the U.S. women’s soccer team suggested that Japan didn’t feel much different from the summer games they played in Kansas City, Houston, and North Carolina.

“I grew up in Daytona Beach,” said Perry Baker, a wing of the men’s rugby team. “If you know Florida, you know it’s very hot and humid there.”

But even athletes competing in the water found the weather in Tokyo uncomfortable. Like the canoeists, the open water swimmers worried about the ocean temperature in the Odaiba Marine Park.