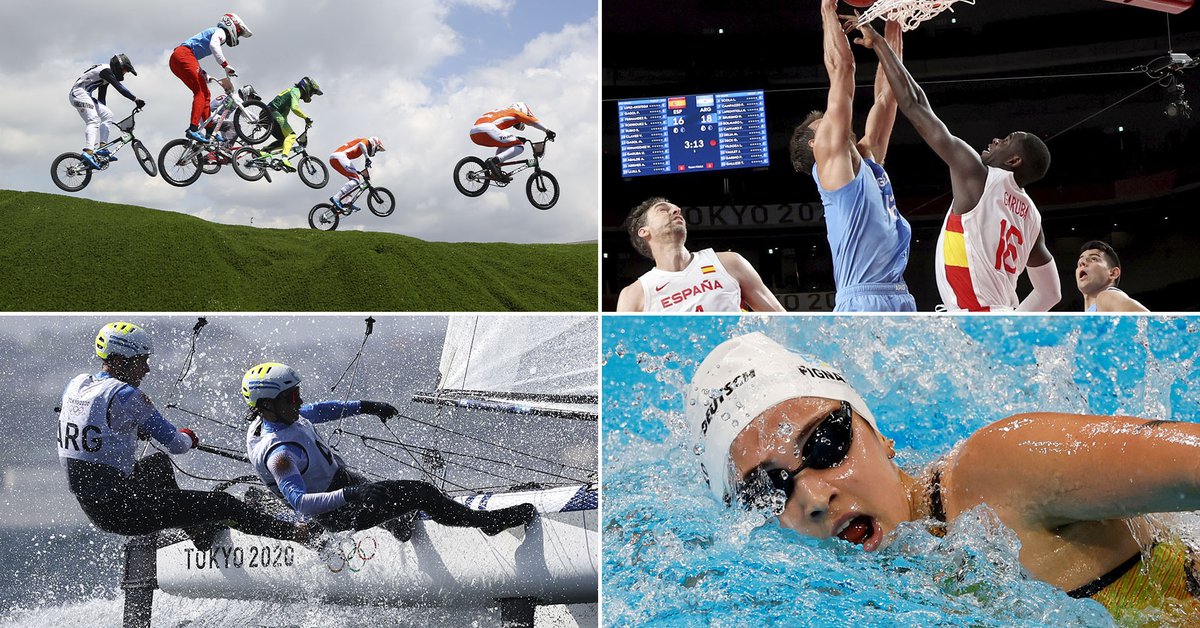 Varied presence of Argentina on the sixth day of competition

The action of the sixth day of competition in Japanese territory had several outstanding performances. The victory of Las Leonas against Japan and the defeat of Alma against Spain stand out. In addition, the young Exequiel Torres advanced to the semifinals of BMX Racing and Facundo Olezza and the Cecilia Carranza-Santiago Lange duo maintain serious chances of entering the Races Medal of their respective categories in sailing.

On the other hand, Las Panteras fell to Italy, Los Leones against India, Delfina Pignatiello said goodbye to the competition after finishing in the last place of her series in the 800-meter freestyle and Santiago Grassi was on the verge of going to the semifinals in the 100-meter butterfly.

HIGHLIGHTS OF DAY 6 OF THE OLYMPIC GAMES

After the defeat to Slovenia in the debut, Alma fell 81 to 71 against Spain and complicated their scenario to get a ticket to the quarterfinals. Those led by Sergio Hernández must beat Japan and wait for what happens in the other groups to see if it advances as one of the best third parties.

The Lionesses clinched a grueling 2-1 victory over Japan and clinched a place in the quarterfinals. The many Argentines were the work of María Jose Granatto and Agustina Gorzelany (Kanon Mori, the Japanese goalkeeper).

The Panthers, who lost 3-0 to Italy and added their third consecutive defeat. The women’s volleyball team had a great start to the game, but the European cast took the win and the top of Group B with Partials 25-21, 25-16 and 25-15.

The Lions, last Olympic champions (they won the gold medal in Rio 2016), they could not settle at the top of the table of positions in Group A. After the equality against Spain, the victory against Japan and the defeat against Australia, the Albicelestes fell 2-1 with India.

Exequiel Torres got into the BMX semifinals (REUTERS / Matthew Childs)

During Wednesday night he also came on stage Exequiel Torres for the quarterfinals of BMX Racing, where he finished 4th, 3rd and 6th in races 1, 2 and 3 and qualified to the semifinals in fourth place.

The duo Julián Azaad and Nicolás Capogrosso fell 2-1 (21-19, 18-21 and 15-6) against Americans Lucena and Dalhausser and ended their Olympic participation.

Mila Kraljev and Evelyn Silvestro they won the final C and were in the position 13 of the female light double rowing scull.

Delfina Pignatiello finished in eighth place in his series (8: 44.85) in the 800 meters freestyle and said goodbye to the competition.

Also Santiago Grassi won his 100-meter butterfly series with a time of 52.07, but could not qualify for the semifinals.


Facundo Olezza finished 3rd in regatta 5 and 6th in regatta 6. The Argentine is in 6th place overall. (Finn)

Belén Tavella and Lourdes Hartkopf finished 13th and 19th in both regattas in Class 470. They are 20th overall.

Celia Tejerina finished 24th in regatta 10, 17th in regatta 11 and 22nd in regatta 12. In this way she is in 20th place in the general classification and failed to qualify for the medal race (RS: X)

Francisco Guaragna appears in 25th place after eight races. The Santa Fe was disqualified in the first regatta of the day and in the second he finished 16th (Laser)

Francisco Saubidet finished 20th in regatta 10, 22nd in regatta 11 and 21st in regatta 12. The Argentine appears in 21st place in the general classification (RS: X)

Santiago Lange with Cecilia Carranza: they finished 8th in regatta 4, 4th in regatta 5 and 6th in regatta 6. In this way The Argentine duo is in 4th place in the general table. (Nacra 17)

Olympic champions Lange and Carranza closed the day in fourth position in the Nacra 17 class and dream of another medal for Argentina
Argentina suffered another setback in basketball against Spain and put their stay in the Olympic Games at risk: what they need to qualify for the quarterfinals
Delfina Pignatiello closed her first Olympic Game and opened her heart with a deep reflection on her performance