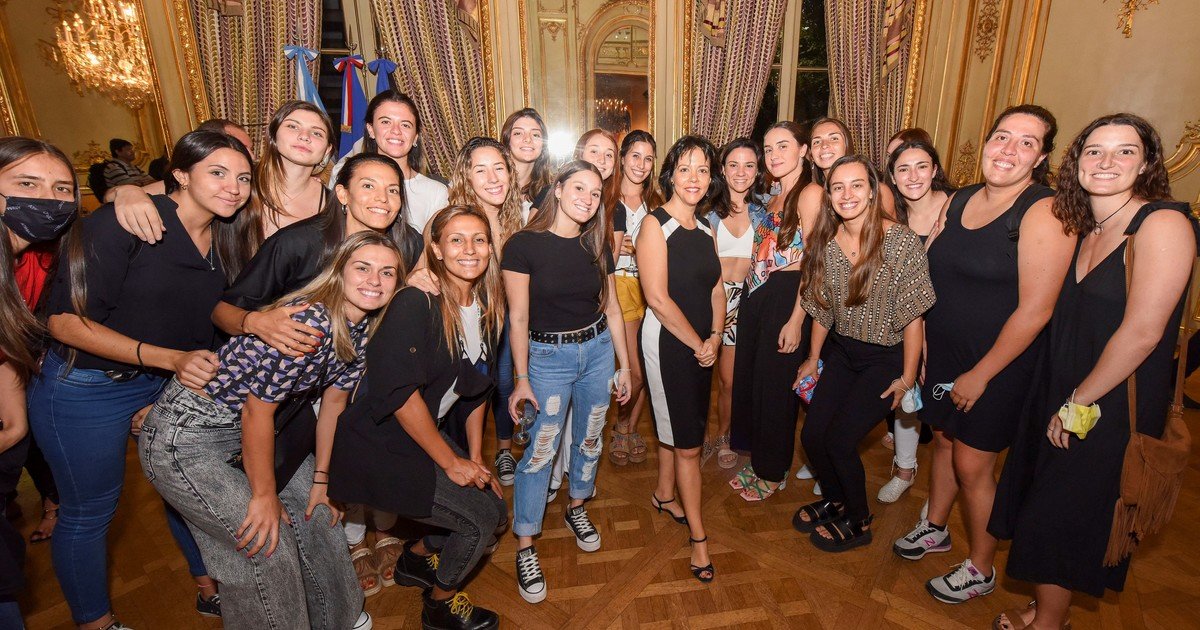 Since the end of Tokyo Olympics in 2021, the national teams put their heads on paris 2024. And this is the case of women’s basketball, a discipline that, hand in hand with the National League, has grown a lot in recent years and dreams of entering his first Olympic Games on French soil.

In this framework and on Women’s Day, authorities of the Argentine Basketball Confederationof the Secretary of Sports of the Nationof the National League and players of this same competition They attended the French Embassy, ​​where they were received by the mistress of the house: Ambassador Claudia Scherer-Effosse.

In addition to members of the 10 clubs that make up the Women’s League, they said present Fabián Borro (president of the CAB), Inés Arrondo (sports secretary), Gregorio Martínez (head coach of the National Team) and Karina Rodríguez (national director of development).

The growth of national women’s basketball

The Women’s League It will go through its fifth season. From the first, doubled the number of teams, since it had started with five. While, the selectionIt’s on the same thread. At the moment has a team of more than 25 professionals among which are coaches, physical trainers, medical staff, props and administrators, who accompany the day to day and the evolution of the players.

Fabián Borro, president of the CAB, at the French embassy. (Women’s National League)

In this order, the presence of the National Training Project (PNF), one of the most important programs that the Confederation has today in which it aims to recruit young players to develop them and progressively increase the size of the National Team, a relevant detail when competing internationally. The PNF is currently starting its second year, already with more than 150 young people.

As for the players already developed, there are more and more who represent the country in the big leagues abroad. In Spain, for example, where the captain of the National Team, Melisa Gretter, plays, or in the universities of the United States and the Italian league. There are more than 100 national players abroad.

The word of the authorities

In the act, the different authorities present, already mentioned, took the floor. “We are grateful to the Embassy of France that from the first day opened its doors to us and accompanies the entire Argentine basketball family at this momentous moment for us. On this very special day of International Women’s Day we give a formal start to a dream that we have, which is to be able to play an Olympic Game with the Women’s National TeamAnd without dreams there are no goals. For us this release is very important, we want there to be equality and visibility in women’s basketball. Us We try to make women’s basketball more and more federal, that our sport is practiced throughout the country and places. The work we are doing together is very important, it is important that we are more equal and make it more visible,” said Fabián Borro, President of the CAB.

For his part, the ambassador Scherer-Effosse commented: “We are proud to celebrate this day and this meeting with the Argentine Basketball Confederation, in the Franco-Argentine relationship that we nurture and will continue to strengthen day by day. It is an honor to receive the CAB and its athletes, within the framework of the launch of the who will make their way to Paris 2024. From the French Embassy we tell the girls that in two years we hope to meet again at the Eiffel Tower. The Argentine National Team has been increasingly reinforcing its importance in the sports landscape, gaining more ground and advancing with firm steps that were reflected in recent times. I always say that there is a little piece of France and Paris in the Embassy, ​​and seeing these elite athletes with such enthusiasm to reach the Olympics fills us with pride”.

Who also had the floor was Ines Arrondo. The former Leona highlighted: “Today is a very special day, a day where we make visible our struggle to build a better, fair, equal and violence-free world. Those who are here are protagonists of that fight in Argentine basketball, the players who have lived with these inequalities and have had to be strong, a fight that continues knowing that they are the ones who are building a better basketball for our country. For a long time we have been working together with the Confederation for this, we work for a better basketball and a better world. We are transforming all of this into a fight that we are carrying out together in all corners of the country.”

Heading to Paris: women’s basketball wants to be Olympic