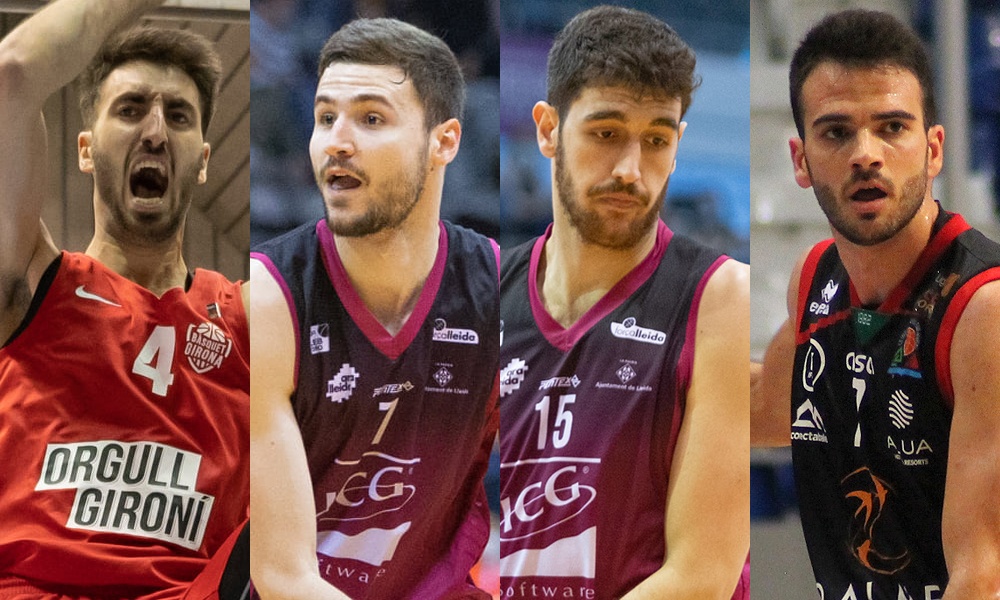 They are Spanish, they play in LEB Oro, they are no longer of U22 age (but yes they are U24 -1998 and 1999-) and his season is worth mentioning. I always tend to look at the U22 for setting a limit when talking about youngsters, and sometimes we forget this lost age group, that of those players who have suffered some setbacks, with a slow evolution or with injuries, but whose quality still intact. We put the focus on four players from that strip and, we say it loud, Spanish: Miguel González, Ignacio Rosa, Èric Vila and Pol Figueras. The first belong to the ICG Força Lleida, where they are basic in the various schemes of Gerard Find. We already analyzed Vila at the time together with his team, Bàsquet Girona, in an article that was very liked about the influence of Marc Gasol in the Gironí squad, where we already highlighted his importance in the team. Finally, Bahía San Agustín is not getting the right pedal stroke, but its captain Pol Figueras is leaving his soul in the attempt to stay afloat.

For me, one of the biggest revelations of the LEB Gold. Perhaps the numerists will not be attracted by their numbers or doubt their position. It is what does not have to see Gold. How many national ‘threes’ of more than 205 centimeters and with technical quality do we have in Spain? I answer myself. You have to remember that he hasn’t played for a few years and that in that sense he still has hours to go in making decisions. Versatile between the ‘three’ and the ‘four’, I think he has felt more comfortable in the forward position (despite what a server wrote in preseason), although the departure of Schaftenaar and, above all, the arrival of Fjellerup has pushed him to the ‘four’. He plays without the ball, attacks the offensive rebound, dares to post, waits on the three-point line to shoot, runs the court and dares to lower the ball to seek penetration. His wingspan behind him makes him an octopus and aids in rebounding. Obviously he needs to polish certain details: he needs more strength at the time of contact when he penetrates, as well as establishing his outside shot, but Vila is back to the joy of the national basketball. Will they dare on the top step to bet on him? If they do, will they sideline you with residual minutes?

What did Gerard find in the head of the man from Valladolid so that that timorous boy who did not play with Baskonia (for which he is on loan) and was shipwrecked at Real Canoe (where he played out of obligation) looks like another player. Basic for the coach from Lleida due to the intangibles he contributes in defense and rebounding, González goes to 30 minutes per game. Very comfortable in situations catch and shoot and coming off screens, he has dramatically improved his free throw and 3-point percentages, some with the defender right in his face. Endowed with good technical quality, you have to ask him for more and that he dares with that 1 × 1 game to reach the hoop or double with his good passing quality. At this level, we can say that Miguel has returned. Will he be capable of more?

An eternal promise. Fourth season in Gold and each year one more step. After passing through OCB, Amics and Peñas, Rosa arrived at Força Lleida with tough competition from Carrera in her position. But the Andalusian has earned a position as sixth man (19 mi) thanks to his production in his time on the track: as much as ‘four, where he executes from the triple in the pick and pop, such as near the rim in his game without the ball; with minutes, and several important ones, of false ‘five’, he is doing a lot of damage with his mobility, benefited by the I.Q. of a point guard like Schreiner. But the best part comes from the confidence that they are transmitting to him so that he can play in the post, as he did in lower categories: a “stronger” Rosa who does not shy away from contact and who dares to play with his back or facing the rim, serving faults. With that daring it seems that in defense and rebound, spots in other seasons, he has been progressing. With continued evolution he still needs to read the game better to interpret it. Given his level as a center and some suffering in defense against explosive fours, does anyone dare to convert from an open ‘four’ to an inside ‘four’ / ‘five’?

Pol Figueras is once again the helm. After tiptoeing on 20/21 and being one of the keys to the excellent campaign in Palma, the Catalan base signed the renewal and, already as captain and in a team that has lost in several close finishes, he has put on the cape of shooting of the car along with shooters Van Beck and Brown. This year orphan of talent at the beginning, his team did not finish starting and the former Blaugrana youth player is often forced to make certain decisions due to the poor play generated by the rest of the team. Brain base with excellent ball handling, passing ability (nearly 6 assists per game), command of the Q&A and comfortable playing in the open field, he continues to score from the perimeter, although this course his percentage has suffered and his 2.4 losses, in a point guard who takes care of the ball, are influenced by having to “play it”. On defense, although he can struggle against physical guards, he reads the game very well and positions himself correctly. After his experience at COB, does he need to feel important to perform?

Other U24 to mention are, among others, Alex Galan (which in HLA Alicante seeks to recover sensations), German Martinez (integrated perfectly in the almighty Covirán Granada) and Albert Lafuente (showing his offensive skills at ICG Força Lleida). What is clear is that these players, despite their youth or years in the category, have been growing and becoming indispensable. Perhaps talking about ACB is taboo, the examples of Ramon Vilà or Galán himself, both back in Gold, or the ostracism of Sean Smith, are proof that many times at the top level they only think of a passport instead to take advantage of the innate quality of some players prepared for it, but to step on the track to prove it. We’ll see what happens in a few months.