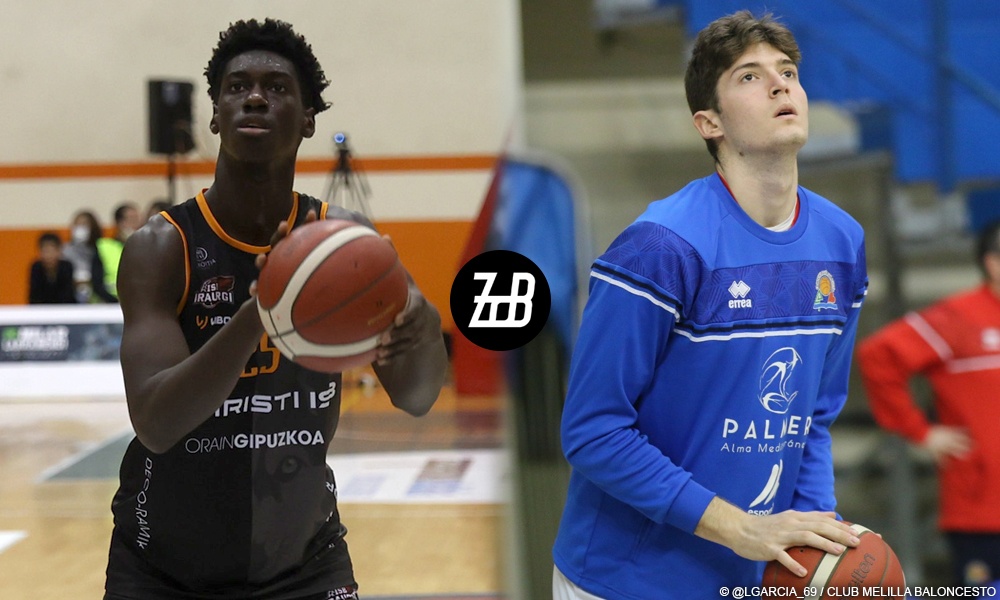 The idea is to see what their strengths and weaknesses are, as well as to be clear about their projection, which in both cases is quite high if they continue to work as they have done so far.

Sidy Cissoko came to the Baskonia structure at a very young age after standing out at the French Center Essone and being recruited by the structure of an agency top. Immediately, the 18-19 season, he was integrated to play in the Basque team in categories higher than those that corresponded to him by age, due to his physique and self-confidence. He was burning stages and progressing in the ACB youth academy until reaching the current point, in which we are talking about the only junior player who actively participates in LEB Oro, a category in which he plays on loan at Juaristi ISB.

Since his arrival in Vitoria, he has always been considered a projection player, but perhaps last season, 20/21, under the orders of Miguel Ángel Hoyo, was the one of his emergence. In double dynamics, on the one hand with the Baskonia subsidiary in EBA (16 pa, 26 mi, 17.4 pt -53% T2, 44% T3- 4.1 re, 2.6 ace, 1.5 ro, 17.1 val), and on the other showing his credentials in the junior category continually, standing out in the Spanish Championship, where he was Baskonia’s best player and was uncovered in the ‘one’ position in the final phase due to the injury of the starting point guard, proving himself as a player who can be a benchmark in that position.

A height of 196 cm and a morphotype with long arms mean that Cissoko can play in both positions on the backcourt, but as we have seen in Iraurgi under the baton of Iñaki Jiménez, his future must be focused on the position of ‘one’. We are talking about a player with a panther-like physique, electric, very explosive, with the ability to break through defenses from the pick and roll with a good finish when he gets to the rim. He can do damage from the outside, especially from standing still, and that ability to generate his baskets adds an above-average vision of the game to assist his teammates. Another virtue is his competitive and winning character, although sometimes he forces himself too much.

He is a player focused on basketball since he was a child and he himself is aware of what his main shortcomings are, as he demonstrated a few weeks ago when defining them in Radio Victoria. He must improve his defensive work by being more constant, because he has the capacity to do so, due to his physique, his ability to steal balls and his intensity. He must continue to mature his shot and a good detail is that he has improved in terms of transmitting body language with his teammates. His other battlefield, and perhaps the most decisive for the point guard position, is decision making; Being a player who needs the ball and feels important from a very young age, he sometimes errs in being too prominent, making wrong decisions as a result of experience in the game, as his coach Iñaki Jiménez correctly defined in a recent interview to Alava News.

Cissoko’s future is great. Without even having a senior season yet, he seems to ask for more, but personally I have doubts as to whether Baskonia can offer him that ecosystem in which to grow. Several homegrown players are the example, and perhaps the best definition is Tadas Sedekerskis and how she had a hard time establishing herself. It is clear that each player is a world, with a very important role as a coach, but Cissoko needs to play, live experiences in the point guard position in the form of minutes, beyond what the quality training sessions of a Euroleague team can provide . In addition, we must not forget that the Frenchman is a future NBA, the predictions of the mock of futures draft they confirm it and has even been chosen to play the exhibition tournament between the United States and the rest of the world, the Nike Hoop Summit, which will be played after two years of absence and whose last Gold representative was Felipe Dos Anjos in 16/17 .

Much of his training has taken place in Spain, where he arrived in the 16/17 season for Real Madrid’s Infantil, quickly becoming one of the mainstays of the white team, as he endorsed with his MVP in the 2017 ACB Mini Cup. Later, he was for four seasons (17-21) playing in the cadet and junior categories along with other white stars, being the star of the Bulgarian team every summer along with the student Stoilov, even playing in categories higher than what would correspond to him by age.

During his time in the white academy he was always a solid player who contributed physicality and balance, but perhaps he did not explode or achieve an upward trajectory like other white blackbirds. At the same time that he played in training categories he played in the EBA League, although it was in the junior category where he stood out for his physique and quality. In such a way that in the junior tournaments he was one of the most outstanding players last season with Real Madrid, and in turn with the subsidiary in the EBA league he achieved averages of 6.4 points, 3.2 rebounds, 1.1 assists, 1.0 steals and 7.4 credits. assessment in the 18 minutes he remained on the track.

This summer he made a brave decision to bet on a team like Palmer Alma Mediterránea Palma in a demanding competition such as the LEB Oro. The Balearic team is a project that in recent years usually seeks to release projection players. With Real Madrid as a junior he had alternated the positions of ‘four’ and ‘three’ as a good forward combo. In Palma he has been seen as a mobile ‘four’ during the season, having minutes of responsibility, alternating very good games with others with less brilliance (fruit of his age) and subtracting a few minutes from the temporary incorporation of the 4-5 Mendy at the beginning it’s from the season. The departure of the French made the Bulgarian play many minutes, responding despite his youth. However, the arrival of the latest signing, Cosialls, has relegated him to the role of sixth man, although in postponed matches, such as the one played against Força Lleida, he has made truly spectacular performances.

Aware of his collection of skills, demonstrated during all these years of training, we are going to try to focus on the game that Kostadinov has offered this course in a Bahía San Agustín where, as we have commented, we have seen him as a ‘four’ mobile of good physical and good springs. His scoring paths have been varied: capable of playing from the outside to the inside against heavier rivals, with good definition in the rim, very active as roller in the game of block and continuation, fast in the transitions, aggressive in the putbacks to look for second options, intelligent in the game without the ball to be liberated and daring from medium long distance. His battlefield is his shooting range: capable of scoring from three, he doesn’t do it consistently and quickly enough that the levels require top; despite having a good physique, at these levels he is equal (compared to the junior category where he stood out) and in his game in the post with his back to the hoop he does not prevail. In addition, he must go to a higher level in his game facing the rim as a handler, since he is a player who, due to his team’s system, has not had a generator function. Back is a player who helps, knows how to anticipate, his mobility is very interesting to cover the shortcomings of his teammates, however we have seen him forgetfulness as is typical at these ages and he must improve his work in defensive rebounding.

The Bulgarian is a basketball project raised in Spain, born in 2003, his future will be marked by his reliability in the outside shot but we must not forget that despite his youth he is a player who has already managed to revive as a Leb Oro player of void.