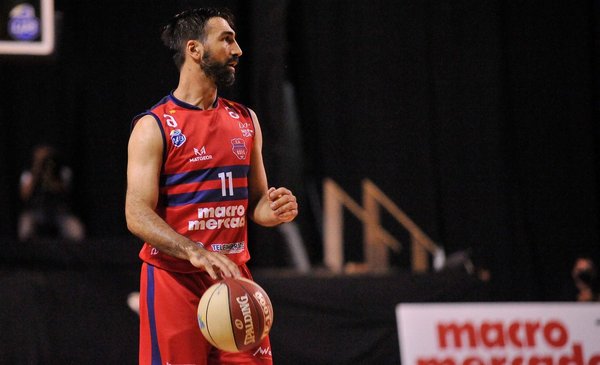 Goes and Aguada arrive in a very different way from the Uruguayan basketball classic that will be played this Thursday at 9:15 p.m. at the Peñarol Palace within the framework of the 13th date of the Uruguayan League 2021-2022.

Goes beat Malvín 73-60 on Monday away and it was like only one of the contest leader with a remarkable mark of 11 wins and a single loss.

Those led by Argentine Guillermo Narvarte had 21 points from a notable Martín Osimani, 15 from his brother Joaquín and a double-double from Venezuelan Nelson Colmenares, with 12 points and 13 rebounds.

Last Friday, in the resumption of the League, Goes had surpassed Olivol Mundial 81-67 with authority, so after the Christmas break, the missionary returned very plugged.

Guillermo Narvarte, the maker of the Goes sensation

The opposite face is that of Aguada que despite beating Trouville on Friday, who was missing a foreigner, this Monday he lost from start to finish with Olimpia 71-58.

Tyrone Lee, who arrived after the break in place of Jarvis Varnado, contributed 11 points and 5 rebounds but has not yet joined the team and does not seem to feel the position of center since he is a 4 by nature.

Aguada could not count on his coach, Venezuelan Daniel Seoane, who contracted covid, or his technical assistant Nicolás Díaz, who had direct contact with a positive. Too Sebastián Izaguirre, American Tyreek Duren and Lucas Silva were absent on the court because of the virus.

For that reason, the one who had to direct and play at the same time was Federico Bavosi. The aguatero faced the game with only eight players and one of them, Juan Ignacio Stoll, had no minutes. Argentine Marcos Mata was the best with 18 points, six rebounds and three assists. The figure on the court was Brian García de Olimpia with 28 points. The game was played in Larre Borges where Aguada was local completing the court closure sanction that originated from incidents perpetrated by their fans from outside the court of Biguá in the final defeat against Capitol for the quarterfinals of the last League.

The classic between Goes and Aguada was changed from Plaza de las Misiones to the Peñarol Palace following a league council that took place on Monday. Alejandro Acosta and a game winner

Defensor Sporting dropped the champion Biguá from the lead by beating him 99-96 with an agonizing triple by Alejandro Acosta. Kelsey Barlow was the merged scorer with 19 touchdowns.

Finally, Urunday Universitario achieved a transcendent victory at the bottom of the table by beating Olivol Mundial 87-82 at home. Facundo Medina was the scorer with 21 goals.

Results of the 12th date

Here are the positions:

This is how the League will continue:

Overdue of the 7th date

Goes won and is the only leader, and Bavosi had to lead Aguada who lost: this is how they arrive at Thursday’s classic