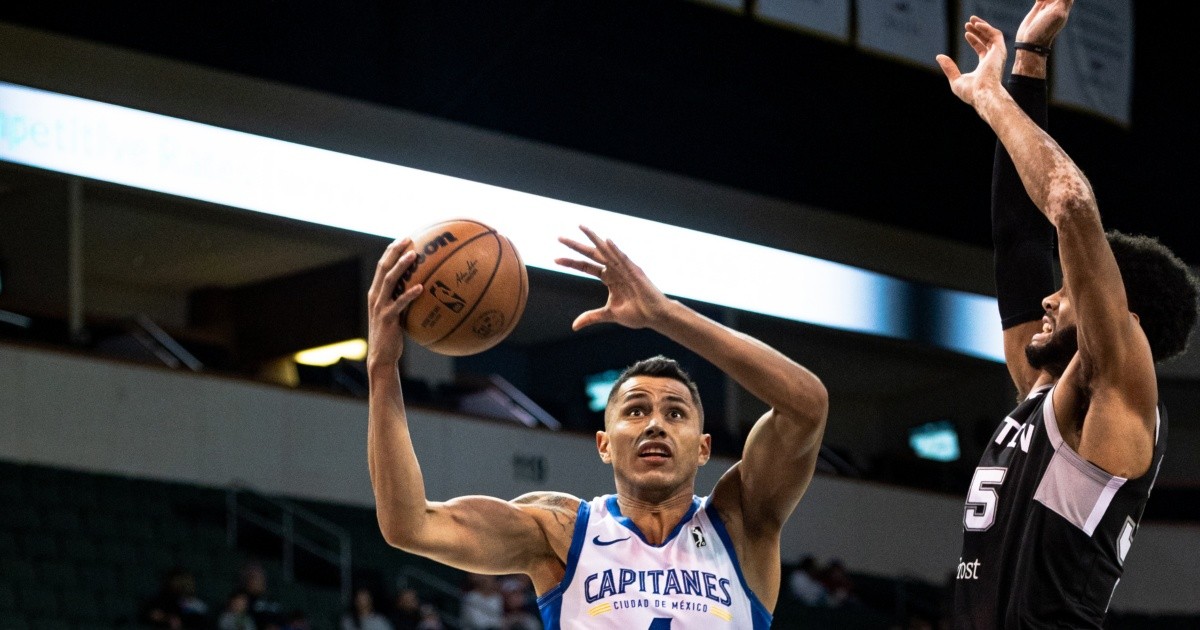 The goal of Fabian Jaimes is set in European basketball and in the NBA. He is one of the two Mexican players who Captains of Mexico City recruited on his first foray into the G-League (NBA development league). At 29, playing in this division represents “a window for international basketball to look at you.”

At the end of the Showcase Cup, in which Capitanes finished his participation as penultimate in the southern division, two of the players were called up with NBA teams, the first was the forward Gary Clark, who signed a contract with the New Orleans Pelicans, and days later the power forward Alfonzo McKinnie signed a 10-day contract with the Chicago bulls, who faced a complicated outbreak of covid-19. In January the team will have two more friendly games that will serve to show its talent to the scouts.

Jaimes considers that among the aspects he needs to fine-tune in order to be considered in the NBA is his long-distance shooting, “because of the way it is played in recent years. I’m working on it, I like to stay to shoot, to work to be able to have that confidence that you should have when you are playing, there are other factors but that would be the main one. Every day is to keep working and keep improving to be able to be there and compete with anyone, “he explained in an interview with El Economista.

Four Mexican-born basketball players achieved that dream, but they reached it at a younger age. Horacio Llamas He was the pioneer when in 1996, at age 23, he was hired by the Phoenix Suns; four years later, Eduardo Najera He was the first Mexican to be selected by way of the Draft, he was also 23 years old and accumulated a fruitful career with the Dallas Mavericks. It took 11 years for another compatriot to join the NBA, at age 26 Gustavo Ayon joined the New Orleans Pelicans and Jorge Gutierrez He was the last one who managed to reach the Nets at age 25.

At how old does age begin to be a factor against looking for better opportunities?

“It varies a lot with each player. There are those who at 32 or 33 already want to retire, and their body has many injuries. There are also those who at 40 are still playing at a good level on the international level or in the NBA. It varies to the extent that you take care of yourself, that you respect your body, your work (…) I am at an important age to take advantage of every opportunity and get the best out of each one ”.

Jaimes has a contract until the end of January, when his Winter Showcase games finish. Capitanes will not participate in the G-League regular season, which is played with 36 games for each team, so it will take several months for the project to restart.

“Meanwhile, what I have to do is continue abroad, fortunately there are two or three proposals out there that have to be evaluated, we have to see which is the best option, which one suits me best in my career. Mainly it is to continue outside of Mexico and, if it does not happen, to continue playing in Mexico, with the national team, the important thing right now is to play and show the talent that exists in Mexico ”.

Jaimes shared that his priorities when considering which team to play for have to do with continuing to grow as a basketball player and learning from different styles of play, be it FIBA ​​or NBA.

“I am at a point in my career where I feel very good, I like to leave everything on the court and play every minute that I get the chance. A few years ago I suffered a knee injury that slowed me down for a year and that’s when the process I was carrying out went a bit, I had been playing at a good level, right now the most important thing is to keep playing at this rate to always be ready, playing with the national team, continue at the international level and seek a pass to the World Cup in 2023 ”.

With this philosophy in mind, the economic aspect takes a back seat. According to Hoops Rumors, this season the G-League increased the base salaries of its players from $ 35,000 to $ 37,000 (about 155,000 pesos a month) for the five-month period of the regular season.

“Some years ago (the salary in G-League) It was very low compared to other places, but lately it has grown and as for what you are doing what you like, that you are traveling, that you are in another country, playing, demonstrating what you know how to do and they give you everything, it is a great advantage to reach a higher level, to go to Europe, South America or to expose yourself anywhere. I think it is a good salary, there are other leagues that pay a little more than what they give you here, but I think it is good comparing everything that being in this league can give you and at the end of the day you are doing what you like and they are paying you for it ”.

Before reaching Capitanes, Jaimes played for the Panthers of Aguascalientes on the National Professional Basketball League (Liga Sisnova LNBP). This newspaper learned that salaries in Mexico range between 100,000 and 400,000 pesos per month.

The Mexican still does not have any agreement to return with Capitanes next season, although his intention is to do so: “I would like to return and I really like the project, it is a Mexican team in this league and I have always liked representing my country. , either with the national team or with some other international team ”.

How do you seek financial stability for life after retirement?

“Since I was in college, I had several teachers who urged me not to leave school because I had many options of leaving from a very young age to start professionally (…) Having that maturity to be able to handle the money that comes when you are a professional yes it helped me a lot. My family gave me advice on saving, investing, all of that, because in the end the life of the athlete in general is not forever, so you have to have an extra there to give you when you finish this. I do have that in mind, I have some investments outside of basketball and I plan to make others with the years that I have left to play ”.

Jaimes studied the Bachelor of Hotel and Restaurant Administration at the Universidad de las Américas Puebla. At the moment he has some investments in the beach, where he would like to build his life once he finishes his time as a basketball player.

“Here at G-League we have an advisor that you can talk to, he can help you see how to invest your money, where to take it, how much to invest, all that. In G-League It is more common to meet people who know what to do with their money and have everything planned, a fact that in other leagues is more difficult, it varies a lot. But here are more tools to help you do that, ”he shared.

G-League, a window to international basketball