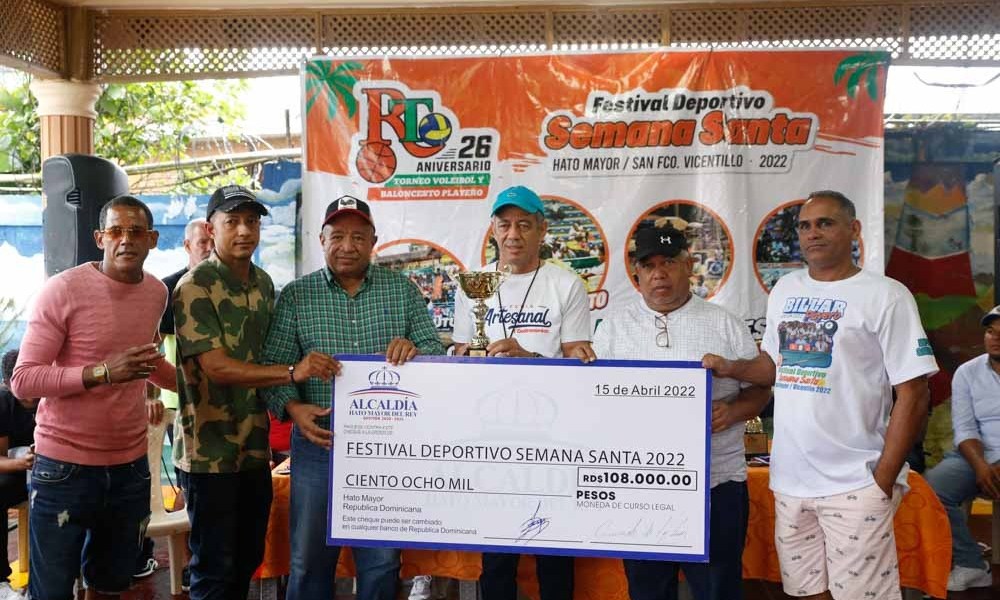 HATO MAYOR.- The Primero Dios team defeated Los Negros 16-10, to be crowned in the basketball 3 for 3 of Holy Week of the Sports Festival Hato Mayor/Vicentillo Holy Week 2022, in its 26th version, held on the floor of the Héctor sports center -El Vikingo- Monegro.

José Rodríguez with eight points, helped by Enquis Zorrilla who achieved six, were the best scorers for the winners, who deserved RD$60 thousand, a champion’s cup and medals. For the Blacks, who took second place for RD$40,000, Joel Abreu stood out with five points and Winder Balbuena with four.

Third place went to Rompe Discoteca, which beat Inversiones 12-9 and received RD$24,000 as a prize.

In the aged category for those over 40 years of age, the victory went to the Bulldog team, who beat the Mongols 12-10. Johnson Luis with four points and Carlos Contreras with three, were the best for the winners, who received RD$45,000 in cash, a trophy and medals as prizes.

The Mongolos were the runners-up for which they received RD$30,000. They had Gilberto Mota as their best scorer with five points, followed by Bruce Leo Polanco, who scored three. Third place went to P and P who beat the W 12-9, for a prize of 12 thousand pesos.

What the mayor of Hato Mayor will do

The mayor of Hato Mayor del Rey will increase sponsorship in the tournament 3 for 3, of the 2023 Hato Mayor/Vicentillo Sports Festival, announced its representative, Amado de la Cruz, when awarding the winners in the aged category, which was sponsored by the city ​​government.

The winners of the first places in the aged category for RD$108,000, had the auspices of the mayor of Hato Mayor del Rey, “because this is not a Rubén event, this tournament, these games are from Hato Mayor and all the Atomayorenses must bet on success, which means healthy entertainment because sport has no party colors or religious preference”.

This is how the mayor pronounced himself when delivering the cash prizes, trophies and medals to the teams that deserved it for their performance in the tournament.

For his part, Rubén Darío Cruz, president of the organizing committee, thanked the Hato Mayor mayor’s office for its support “in the person of Amado de la Cruz, who has understood that the tournament is a mark of our province.”

The winners in billiards

In category B, first place went to Juan Lorenzo Castro, who was awarded 25,000 pesos, second place to Michael Sosa, who received 15,000 pesos, and Amaurys Caminero came in third place for 7,000 pesos.

In dominoes, the couple made up of Obisfido Reyes and José Berroa were crowned in the men’s category, with a prize of RD$10,000; Hanser Amador and Carlos Ariel Lizardo came second and received RD5,000, and third went to Sergio Reyes and Ángel Berroa, who received RD$3,000.

The winners in women’s dominoes were María Peguero and Maura Mercedes, who received as a prize, in addition to medals, RD$6,000 pesos; Decenia Gómez and Máyaris Vásquez were second for RD$4,000 and the third position went to Milagros Santana and Yuleysi Ramírez, who were awarded RD$2,000.