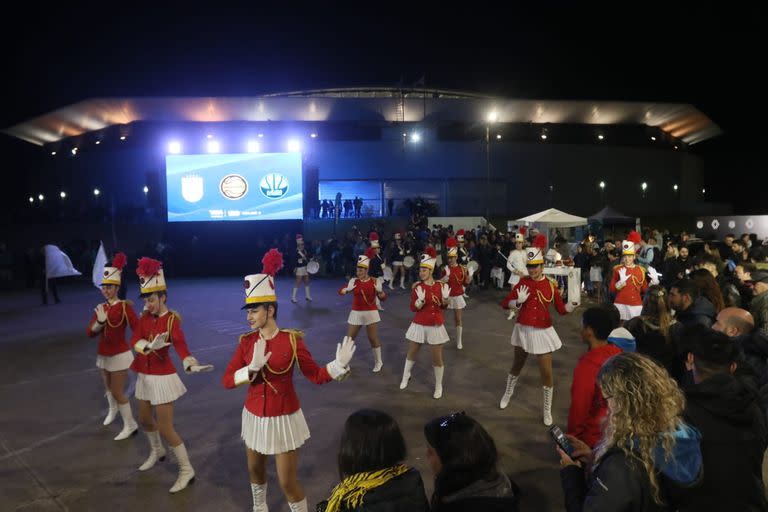 MAR DEL PLATA.- “This is a consolation, because I found out about the sale of tickets late and getting a pair was impossible, they flew”, comments Eduardo Domínguez, who early and with his grandson Gaspar secured a place in the parking lot of the Islas Malvinas sports center to continue the match between Argentina and Bahamas from a giant screen, outdoors and under a night too wintry.

An emergency Plan B resulted for viewers in this live broadcast offer less than 50 meters from where Facundo Campazzo, Nicolás Laprovíttola and other figures from the Argentine basketball team played on Monday night, another step on the road to the next World Cup .

Those who showed up in daylight, around the end of the afternoon, even had the pleasure of seeing the national delegation when it arrived at this sector of the Municipal Sports Park. As they passed, they were left with applause and shouts of encouragement.

The fan fest, as this proposal was baptized, also included almost a dozen food trucks that improvised a food court a few meters from the stage of this international qualifying round and not far from other stalls that, already on the sidewalk, generated a curtain of smoke with a more than tempting aroma, between hamburgers, sausages and grilled bondiolas.

There was a party atmosphere with local identity. The Guardia del Mar, the historical choreographic body of the city, walked through that space with its steps and the grace of its dancers. And, just there, a hoop proposed by a sponsor entertained the children and not so much in the attempt to score.

The 6,000 tickets went on sale two weeks ago, on a digital site. They had values ​​from 2,000 to 10,000 pesos and they sold out very quickly. Yesterday a small remnant appeared that suffered the same fate, a sign of the great expectation generated by seeing the best basketball players in the country here again, continuators of a team that became a legend and that went down in history by dint of titles and podiums as the “Golden Generation”.

Mar del Plata is a historic place for this sport, with almost 30 outstanding presence at the highest level of national competition. From Peñarol and Quilmes he had a permanent presence in the National Basketball League and with the first he achieved glorious moments, with several titles, even outside the country.

“We came to see a very good team that we have, but above all to meet again with Campazzo and Che García (Néstor), two of our idols,” warn Jeremías and Tobías, both close to turning 30 and fans of Peñarol, who since here and with the now coach of the national team, he got tired of winning titles.

The Cordovan point guard took root here when he was just a teenager and from these beaches, after establishing himself as a true star in the Mar del Plata team and already with a strong presence in the Argentine team, he made the great leap that first took him to Europe and then to his first experience in the United States NBA.

The national team felt comfortable in this stay by the sea. He arrived two weeks ago and here he prepared for the game he played last week in Canada, with a loss but still a good performance. He knows the local love as the aforementioned Golden Generation knew, I got used to this scenario in the previous competitions that gave him his greatest international achievements.

Several of those who grew up here watching some of these players, with hours in the stands both at the Islas Malvinas stadium and at Eleven Unidos and even the now-defunct Superdomo, now have tickets in hand, on their way to the stalls. Or, with no luck buying electronically, experience this game as close as possible to the live stream.

The cold didn’t help much, but everything was ready by sunset so that fans who couldn’t get their seat in the stadium could live their basketball party in an open-air experience. It was a proposal that the municipal government faced and that intended to measure results and conditions to replicate it in three months, when the World Cup in Qatar begins.

According to sources from the commune, this fan fest will be in some sector of the beach, so that you can see Lionel Messi and the “Scaloneta” without getting too far from the sun and sea.

Fan Fest: how basketball had its party in Mar del Plata… and with its sights set on Qatar