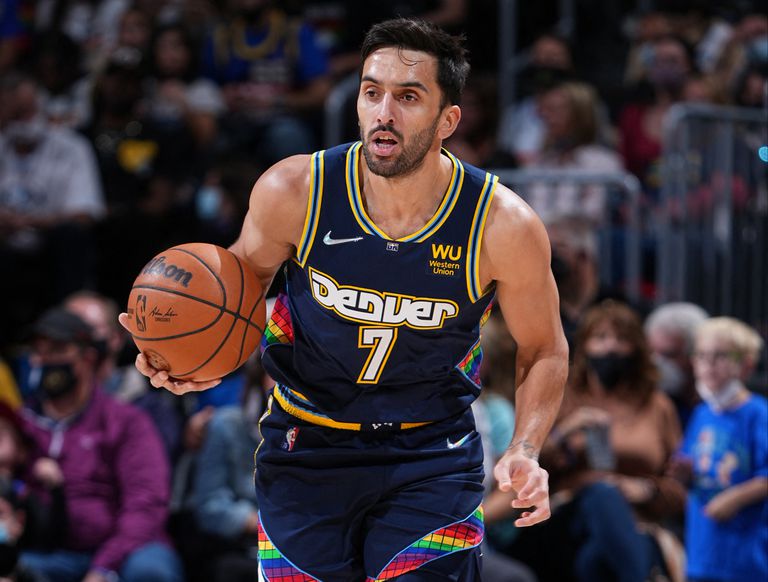 It’s an important year for me, but I don’t want that to play a determining role. My head didn’t changeAs it is my last year of contract with the Denver Nuggets, I don’t want it to mean negative pressure. A lot happened at the beginning of the season in the NBA, I had to start playing the minutes I expected, then I had Covid, I had to get back into rhythm, I had to play little and nothing, I was left out of the rotation and now, for different reasons , injuries and others, I have to play more minutes. Today I feel more regular than at the beginning of the season, I am getting the ball, defending well and gaining confidence in touching the paint, something I did not do before. It is true that I had ups and downs of the game, but I never rethinked anything. Yes it is true that when you play a bit you wonder if you are on the level, but that happens very quickly, it is an isolated question, because I focus again and I silence my head.

This is a super competitive league, very complex and it seems to me that one of the most difficult things is that at times you don’t play much, you don’t enter the rotation and the next day, yes. I always tried to be positive, because I didn’t know when my chance was going to come and I wanted to take advantage of it. I trained for that moment. It was not easy, but I took it as something normal in this league and that it is something that does not happen in any other. When I had to play I tried to be aggressive, defend hard, be focused and that attitude helped me a lot.

I always relied on my teammates. The only thing that was not ordered for me is that I did not play and I have fun playing. So all my energy was put into training. It’s real that when it wasn’t my turn to play I was a little frustrated, but it put me ahead what was the next step. In that scenario my teammates and the coach gave me confidence, they spoke to me to always be prepared. They told me that it is normal for these things to happen in the NBA, that many times the coach has to fit pieces and try new strategies. And of course I know, because this is a team sport. Many times I try to put myself in the coach’s place and then I realize that it is not easy, because you have a team, you want to win and it is necessary that all the pieces fit together. The truth is that I never felt it as personal, I knew that my opportunity was going to come. It would be very selfish if I pouted because I don’t play. The team wins and that is the important thing.

One of my main goals in this league is to learn to play without the ball. It was my great challenge. It was not my main virtue to function without her, because my strength is to have control of the ball. When I got here, I knew I had to develop that aspect and the same team dynamics make it improve at that point in the game. I tried reading to see how I could make an impact without having as much access to the ball. I believe that I am still in the process of adaptation in that sense, there are times that I make mistakes. What I enjoy is that when I have an error I can review it, I discuss it with the assistants, they show it to me in a video … I enjoy the learning process.

As the games went by, in the latter mainly, I noticed that my colleagues realized that I was more confident and that increases the chemistry on the court with everyone. I seek to gain their trust with my way of creating the game. And it is not easy to get out of the systems at times, there is a very fine line between breaking the structures and not sending a baton. It is part of my gameplay to do the opposite of what is expected, but you have to earn that chance to do it. And that implies making good decisions, because if you lose the ball, no one is going to make a play for you afterwards. And there it is possible that one wants to play not to be wrong and when you focus your game on that, inevitably you are going to be wrong. Because, it is not so easy to be or not disobedient. It is very important not to go too far in that sense and to be controlled.

The whole NBA world is really incredible, but what amazes me the most today is playing with people. Although we ended the previous season with an audience in the stadiums, now everything is more liberated and maybe you have a fan sitting next to you half a meter away. With the waiter who brings you your beer and something to eat. Those things still surprise me. What I experienced in New York was incredible. Because I had everyone by my side and those who were close were actors and directors. And it seems normal, but it is not. When I am writing these lines I realize that it is not. And when Spike Lee approached me, at Madison, when I was coming out in the second half … He asked me where I was from. I told him: “I am Argentine, like Pablo Prigioni, that Pablo played here for the Knicks.” He replied: “Yes of course, I remember.” And behind that he began to tell me: “I respect a lot your way of playing, your fight, your dedication, your heart … The truth is that I respect him.” I thanked him with some shame and when I turned around I was laughing at what had happened.

In addition, it was curious that in New York there were some fans who were close to him and They spoke to me in Italian, maybe because they saw my last name with a double zeta they thought I was Italian. So, I looked at them and asked them not to speak to me in Italian because I didn’t understand them, to speak in Spanish. The crazy thing is that all that happened while we were playing. Those are all things that I’m getting used to, when I took a free kick I was used to being whistled at, not being spoken to in languages ​​I don’t understand. I really enjoy it, and I also try to be, in some way, part of the circus.

The coach asks me to be me. He never asked me on time, but I think he is waiting for it to be a 10 in defense, that he infects that, that he can play the pick and roll well by stepping on the paint … I don’t think you can ask me to score 30 points, because it’s not my strong suit. What happened to the award they gave me for being the best defender in the games with San Antonio and Atlanta, is a way of understanding that I have to always maintain my intensity in defense. The assistants are controlling all the statistics, the pointed shots, the rebounds… From the beginning of the season, after each victory, a chain is given to the best defender chosen by the coaching staff and that depends on many factors. The tactical is the main thing and then there is the incidence you had to win the game. The chain is the same as always, you take it home and the next day you have to return it. It is the second time that I have to play and it is a nice incentive for every game I play.

With my colleagues I also try to be me, although I listen more than I like to talk. As it is not my first language … With Nikola [Jokic] I have a good relationship, with him he is one of those that I feel calm, because if I make a mistake with the language I do not care. I speak to him without problems, sometimes we get together for dinner with him, with Čančar [Vlatko] and with the physical trainers. Before PJ Dozier got injured, he was my partner on the plane. On the first trip I was looking for a seat and he told me: “Sit here with me.” There we began to chat more and I asked him if when he spoke with me he had to slow down or if he did it like when he was chatting with his friends in the neighborhood. And he replied: “Not close.” So I proposed that he talk to me as he does with his people. I told him that if I didn’t understand something I was going to ask him. That helped me a lot, because you need to have that speed and know the idioms. If they speak to me normally or slowly I understand everything, now when they speak as when they are in the street with their people … There are game situations that happen so quickly, that they occur in thousandths of seconds, then, having the language more oiled I can solve them in Another way. The good relationship I have with my colleagues helps me in that sense.

Also, we are a team that places a lot of emphasis on talking all the time. Basketball is a sport with a lot of anticipation, so it is important to communicate, because otherwise you do not know what your partner is going to do. The coach asks us that, that we have a lot of connection. When it comes to defending we have to be very attentive to what the last man sings and since everything has its name and everything happens so fast, we have to be very connected. We have to trust the one behind us, because he sees the action better. And all in a context in which your partner speaks to you, the public shouts, the rivals speak to you, several colleagues say things at the same time, the coach who gives directions … So, being able to accustom my ear to these situations is essential. I downloaded applications in English to practice, I try to read in English to improveI think this year I am giving a lot of attention to the language. It’s like I need to take this new step forward, this adds up to earn the trust of my teammates or to have minutes. In the smallest details I want to be. What I can control with my hands, I will try to control.

Facundo Campazzo in LA NACION: “In the NBA it is not so easy to be disobedient or not”