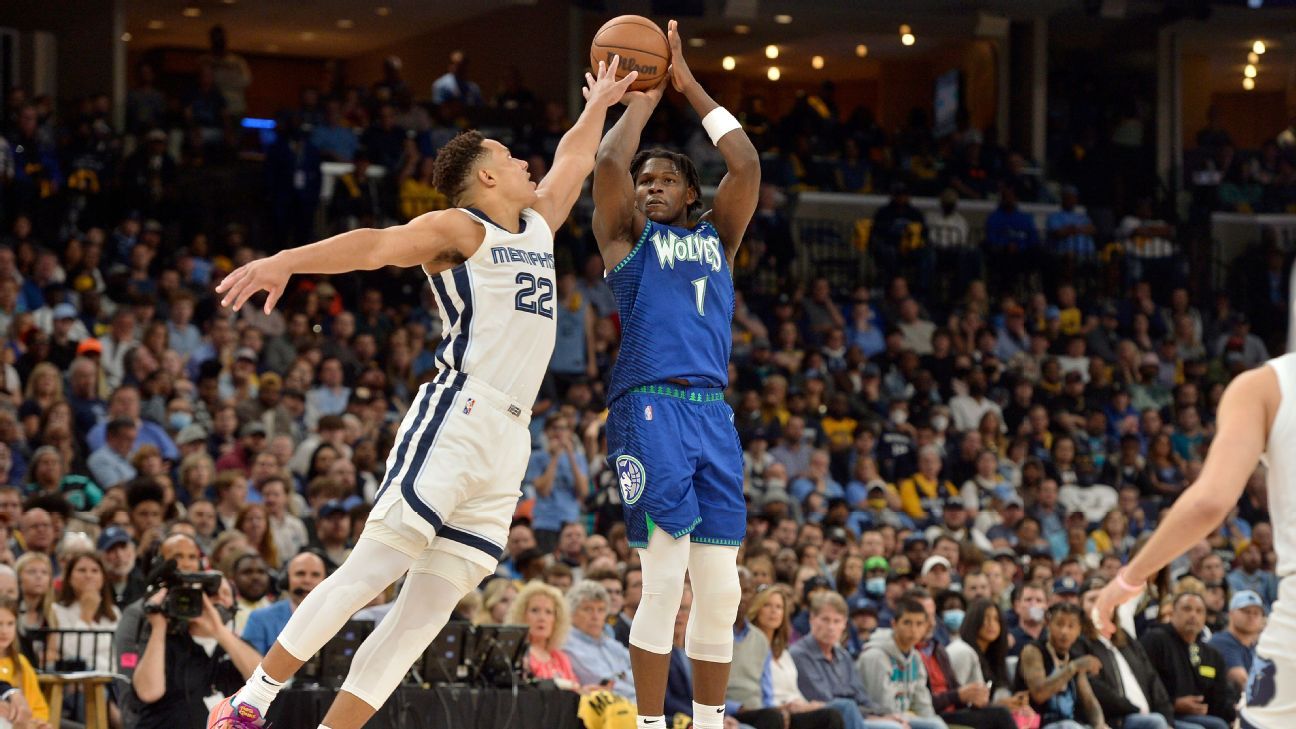 MEMPHIS– Anthony Edwards dazzled in his postseason debut and Karl-Anthony Towns came back in impressive fashion as the Minnesota Timberwolves defeated the Memphis Grizzlies 130-117 in Game 1 of their first-round playoff series on Saturday.

“We did a fabulous job of playing our game, Timberwolves basketball,” Towns said. “This was a team victory. This happened because all of us came here today with one goal in mind and that was to win. I thought we played a lot of winning basketball. We did a lot of little things that it takes to win; we should be very proud of our performance.” .

Edwards, the No. 1 pick in the 2020 NBA draft, scored 36 points to become the third-youngest player to score 35-plus points in a playoff game, behind only Derrick Rose Y Tyler Herro, according to research by ESPN Stats and Information. He did damage all over the floor, draining four shots from beyond the arc, three baskets at the rim and making 8 of 8 free throw attempts in one of the most auspicious coming out parties in recent NBA history.

“I told [Taurean Prince] that I treat every game the same,” Edwards said. “It didn’t feel any different, like a regular-season game to me.”

Towns, who struggled from the field and foul trouble in Minnesota’s play-in win over the LA Clippers on Tuesday night, reversed his fortunes with an efficient 29-point, 13-rebound performance. He dominated the center of Memphis, Steve Adams, scoring on 9 of 11 attempts against the Grizzlies’ stalwart big man. It was a stark contrast to his choppy effort at Minneapolis.

“I’m happy with the performance I had tonight,” Towns said. “I really feel like that’s what I’m supposed to do. It shouldn’t be something we should celebrate, like, ‘Oh, you get to play a really good game on a national stage. You should be really proud.’ and excited.’ I’m supposed to do that.”

In his postgame comments, Towns emphasized Edwards’ amazing shooting, an ability to hit tough shots against a tight defense. On Saturday, eight of his 12 made field goals were contested by Memphis defenders.

“He’s not going to have an easy shot,” Towns said. “For him to be able to take multiple dribbles in the playoffs and still get to his spot and make a shot, it’s something special. Because once you’re in the playoffs, you usually take the dribbles one by one away and he’s still finding ways to get there. It’s a special talent.”

Edwards’ shot probability, which measures the probability of a shot being successful, was the lowest among the eight players in the game who attempted more than 10 shots from the field, according to Second Spectrum. However, he finished with a healthy 56 percent effective field goal percentage.

Mindful of his reputation for taking challenging, sometimes lower-percentage attempts, Edwards joked that he was quite pleased.

“I love my shots,” Edwards said. “Whatever shot I take, whether it’s a step-back triple shot or a step-back midshot or a floater or a layup, whatever my shot is, I like it. Sometimes [al entrenador de los Timberwolves, Chris Finch] You may not like it, but I love my shot. I only trust myself”.

The Timberwolves are also banking on Edwards as the long-suffering Minnesota franchise goes up 1-0 in its quest to win a playoff series for the first time since 2004.

“When he plays basketball at this level, he’s almost unstoppable,” Towns said, before correcting himself. “He’s unstoppable, actually.”

Edwards dazzles with 36 points in his playoff debut