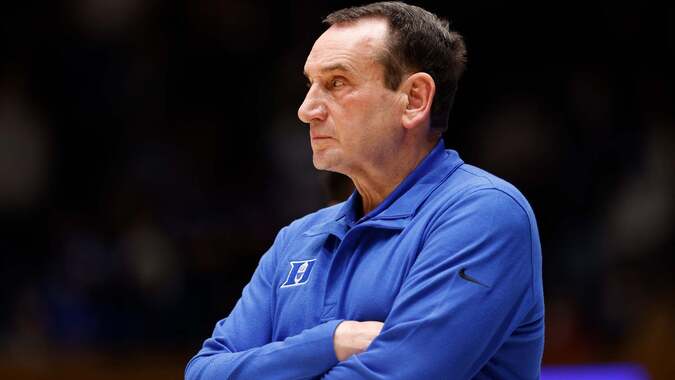 College basketball in the United States arouses as much or even more fanaticism than professional basketball. That’s why it’s no wonder that Mike Krzyzewski’s last home game against Duke University, after 42 years as head coach, was a sensation for the fans.

Mike Krzyzewski jumped onto the field, where 96 former players of his -uniformed with a commemorative jersey- made a hall of honor for “Coach K”, among them were: Shane Battier, Carlos Boozer, Mike Dunleavy, Grant Hill, and Christian Laettner .

Also read: LeBron James among the longest players to score 50 or more points

Similarly, in the stands of the Cameron Indoor Stadium they also received certain celebrities from the world of basketball and entertainment such as: Dirk Nowitzki, Commissioner Adam Silver, Jerry Seinfeld, Ken Jeong and Retta, and businessmen such as Tim Cook.

According to VividSeats, the average ticket price for Saturday’s game was $5,307, more expensive than nearly every Super Bowl (except three) and more than double any other college basketball game since 2010—precisely a North Carolina vs. Duke in 2019, which featured Zion Williamson and RJ Barrett whose price of $2,408—. The most expensive buy-in for this engagement reached a record $80,000.

At 75 years old, Mike Krzyzewski decided to end his 42-year career at the helm of Duke University, which he turned into one of the most successful sports programs in the entire United States, having won the first division of the NCAA on a total of 5 occasions (198).

Krzyzewski went 612-93 overall in his 47 seasons as a college coach for an 86.8% winning average. He never had a losing record and in 11 of those seasons he ended up as a home wild card. Krzyzewski was also responsible for 62% of Duke’s historic NCAA wins.

Similarly, Krzyzewski was the coach of the United States national basketball team since 2007, and in that period the “coach k” won three gold medals, one in Beijing 2008, another in London 2012 and the third in Rio. 2016, in addition to 3 World Cups.