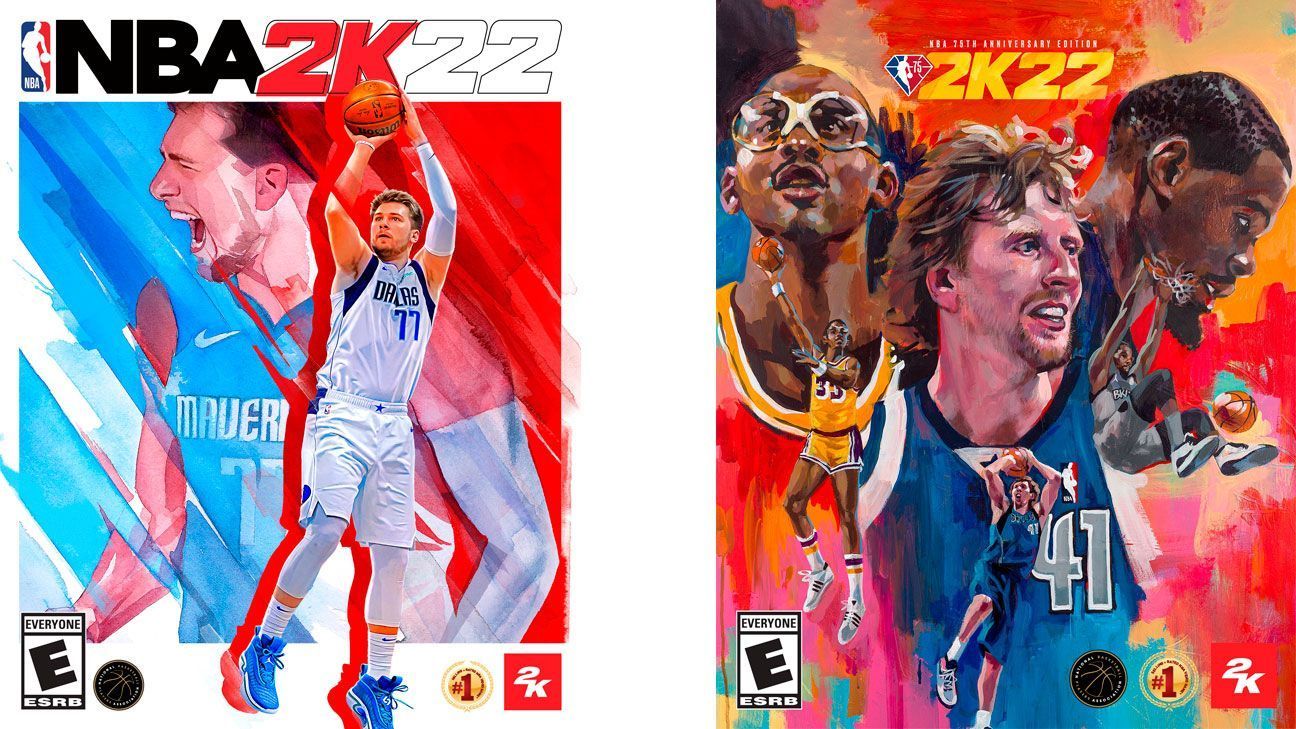 NBA 2K announced the complete cover of its athletes for NBA® 2K22, the video game that has been a trend in the last two decades in the world market.

Among the prominent personalities stands out the figure of the Slovenian Luka Doncic, athlete of Dallas Mavericks, who looks at the front of the Standard Edition and Cross-Gen Bundle, while the trio of legends formed by Kareem Abdul-Jabbar, Dirk Nowitzki, and Kevin Durant make up the cap of the NBA 75th Anniversary Edition, whose line of argument is the change that these athletes made in the game.

The artist who covered the 75-year-old edition is Charly Palmer, whose work mixes composition and a unique technique that awakens a unique style. Palmer’s work is widely recognized in the United States and his series of paintings inspired by civil rights and the so-called “America Must Change” have made the cover of the magazine. TIME in July.

@ NBA2KMovement A look behind the scenes of # NBA2K22 with our cover athlete, @ luka7doncic! Reply #unsubscribe to opt-out.

Getting to the global cover of NBA 2K22 is special for me, “said Doncic.” I am very proud to represent my country is such a special cover, with the colors of Slovenia. Basketball gave me so much and I’m excited to give it back. I will be working with 2K foundations this year to help children around the world, “he said.

ESPN.com was present and actively participated in the conferences held by those responsible for NBA 2K with Dirk Nowitzki and Kareem Abdul-Jabbar, respectively.. The interviews were carried out through the Zoom platform and the world’s leading media participated.

“I’m really honored to be on the top of the legends,” said Nowitzki, a 14-time All-Star, 2007 NBA champion and MVP with Dallas. “It is a huge honor for me. Of course, sharing this place with Kevin Durant and Kareem Abdul-Jabbar, two of the best players in history, is incredible. Even in the standard edition of the game, Luka appears. Two Mavs al At the same time it is very special, I am super happy that it is like that, “added the German power forward.

“I loved this game my whole life, and to be meaningful in the sense of people who love basketball and play video games is a real honor,” said Kareem Abdul-Jabbar, NBA’s all-time leading scorer and legend of Los Angeles Lakers.

I have 2 big announcements to make: I’m headed to Milwaukee for Game 4 tonite & can’t wait to see all the fans for the win! If you’re lucky enough for me to hear u scream I’ll flip you a signed card. More of a wowzer …
“I’m so excited to be on the cover of # NBA2K22. Thx @ NBA2K! pic.twitter.com/JC7MJta5UU

THE WORLD CHANGED AND BASKETBALL ALSO

Asked about the COVID crisis and the advance of the NBA, both Nowitzki and Abdul-Jabbar were aware of the new order that is being lived.

“We are coming off a difficult year for all athletes and for the general public due to the pandemic that affects the world. It has been a tough season for everyone. But I think the NBA has done a phenomenal job to ensure the safety of all in the circumstances. difficult, “Dirk said. “Today big players can run and shoot, and Europeans who make it to the NBA adjust well to that. The game has become more global in the last 20 years, Europeans arrive, contribute and some are even stars on their teams. . It’s a lot of fun to watch. I think the game is in good hands. There are a lot of young talents that will carry this league forward for a long time. Luka Doncic, Giannis Antetokounmpo, Nikola Jokic, the game today is very skill-based. Anyone shoots , he moves the ball, he makes decisions from the dribble, he’s great. I think the skill level has skyrocketed for the better in the last two decades, “he added. “I think my game would have fit perfectly in what is done today, with all the players scattered, open, that you can play pick and roll, pick and pop … there are always shooters, sometimes three, sometimes four and even five. It’s wonderful. “

“If I was born in this era, I could do a lot of different things. I think I could have taken the ball off my board and lead the attack in transition. I could do that when I started high school, but my coach at the time told me that Do not try to transfer, leave that to the point guards. Let him look for a good position in the post. Today the game is so fast that any center can start the counterattack or finish it. It is very interesting. How the inside has to go to the perimeter And defending pick and roll actions, they don’t allow easy penetrations. More defensive skills are required from the taller men. I think those changes really helped improve the game, “Kareem said.

LEBRON JAMES, A DANGER FOR KAREEM?

With 38,387 points scored, Kareem Abdul-Jabbar remains as NBA’s leading scorer of all time. LeBron James, with 35,367 points scored, is behind Karl Malone (36,928), but he is the only active player with a serious chance of dethroning him on the pedestal of all-time scorers.

Can the King actually reach it? “Well, the truth is that I do not know if he will be able to reach my mark. He will need to be healthy and recently he has had some issues with injuries. It will have to do with how long he can play in good condition without sacrificing his health. I wish him the best. I hope he can be. healthy and we’ll see what happens, “Kareem said. “I’m not on the lookout for that, but if LeBron gets close to the record I’ll follow him closely. When he’s really close, I’ll surely say a few words. I’ll be happy to congratulate him if it happens, because the records are there to be reached, like a race. Whoever. has a brand has to know that it is something only temporary, “he completed.

THE SKY-HOOK, A CELEBRATE MOVEMENT IN HISTORY

The fadeaway of Michael Jordan, the no-look by Magic Johnson, the Dream shake of Hakeem Olajuwon, the Euro Step by Manu Ginobili … How does the Sky Hook in these kinds of moves for Abdul-Jabbar?

“I think that he Sky Hook It’s the best move ever because it made me score more points than any of the other guys. That put me number one. And that’s why I’m very proud of that, “Jabbar said.” I have no other favorite moves in the NBA today, “he added.

“I think I would still be a pole scorer in basketball today because I was really consistent. I shot 56% from the run, so they would keep looking for me on two-point shots. I think if I had worked the issue, I could have shot as well. triples, “he completed.

Last season, NBA 2K integrated elements of social justice into its experience, including, for example, actions linked to the Black Lives Matter and other graphic references. Abdul-Jabbar has been recognized as one of the historical icons in the fight against racial inequality.

“I think you can always pay attention to social justice actions. I don’t know how much you can do with a video game, but I do think there is a connection that allows people to learn what players do off the field,” he said. the former champion with Milwaukee and Los Angeles. “There have been successful efforts in recent times to collaborate and bridge the gap between communities and law enforcement agencies that have been facilitated by sports teams. I always talk about the WNBA All-Star and MVP Maya Moore. There was a young man in the state of Georgia. that he was unjustly imprisoned. He was able to use his influence and his money and his outstanding position as an athlete to free that young man from his unjust imprisonment. Now they are married. So, a lot of good things have happened just because of the activism of various athletes. And the fact That they have a better financial structure around them because of their professional salaries allows them to do more for their communities. Therefore, I hope this continues to be a growing trend, “Kareem added.

“The NBA 2K cover has always been a vehicle for storytelling and a way to showcase the unique and diverse backgrounds of athletes,” said Alfie Brody, vice president of global marketing strategy for NBA 2K. “The culture around basketball is vibrant and transcends geographic boundaries. This year, we want to showcase that global diversity through the incredible and unique art of Charly Palmer. “

The NBA 2K, which began its way on the various platforms in 2005, is today a worldwide rage. All editions of NBA 2K22 are scheduled for their world premiere on September 10, 2021.

The video game, however, can already be purchased in advance starting this Wednesday, July 14.