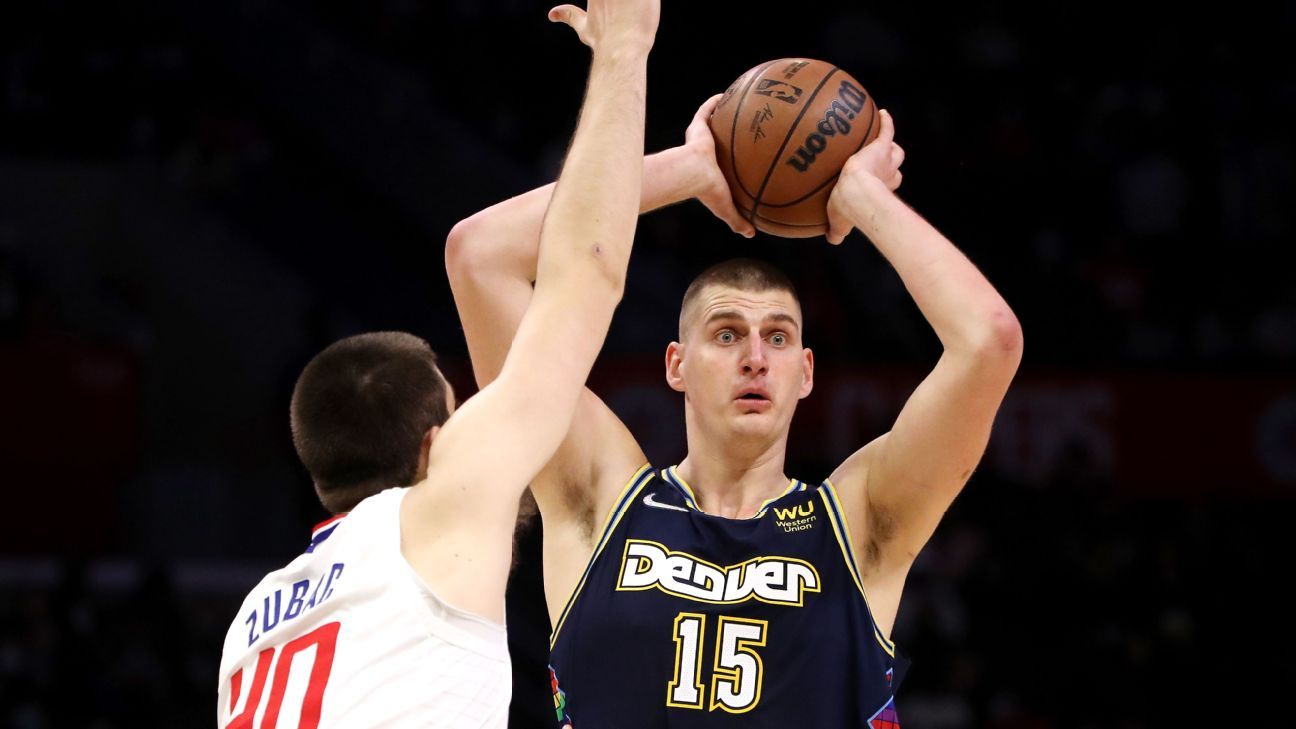 Nikola Jokic showed his category of current NBA MVP, in a day where Joel Embiid showed his potential, while Jimmy Butler returned to action with a victory and the Cavaliers continued their victorious path.

After a misstep against the Celtics, the Cleveland team starred in a resounding victory in the NBA. Love, Garland, Valentine, Watanabe, Boucher and DJ Wilson, among the most prominent.

Nikola Jokic scored two free throws with 12.7 seconds left in the game and had 26 points and 22 rebounds to give the Denver Nuggets a 103-100 victory over the Los Angeles Clippers.

The Denver center demonstrated his NBA MVP status: he made 9 of 24 shots from the field and was perfect from the free throw line in 7 attempts. In his performance under the boards he took 16 defensive rebounds and 6 offensive rebounds.

In addition, Jokic added 8 assists, 2 blocks and 2 steals to be the heart, soul and body of the Nuggets.

Eric Bledsoe scored 18 points, with 10 assists, for the Clippers.

It was 113-105. The winners included the return of Zach LaVine, who converted 32 points, while DeMar DeRozan added 24 points. Nikola Vucevic had 16 points and 15 rebounds.

Veteran Kevin Love scored 22 points, including 6 3-pointers, to lead the attack of 22 3-pointers by the Cleveland Cavaliers to beat the Toronto Raptors 144-99.

The Spanish point guard Ricky Rubio scored 16 points, gave 6 assists and stole 3 balls, becoming a nuisance on the defensive level for his rivals.

Yuta Watanabe had 26 points and 13 rebounds to lead the Raptors.

With Jimmy Butler and Caleb Martin as offensive figures, the Heat showed their great moment against the Magic from the FTX Arena.

The Chicago Bulls trident led by Zach LaVine, who scored 32 points, couldn’t find anyone to stop them and defeated the Indiana Pacers 113-105.

LaVine showed the best of his game in the fourth quarter, in which he scored 12 points, which helped clear the situation for the Bulls, who also added 24 points from DeMar DeRozan and 16 points and 15 rebounds from Nikola Vucevic.

Caris LeVert scored 27 (16 in the last 12 minutes of the game) and dished out 9 assists for the Pacers.

Jimmy Butler returned to form after a stint on the disabled list and was the key factor in the Miami Heat’s 93-83 win over the Orlando Magic.

Butler, who played his first game after leaving the disabled list, had a double-double of 17 points and 11 rebounds to lead the Miami team to their third win in a row.

Gary Harris was the Magic’s leading scorer, with 20 points, hitting 7-11 shots from the field, for a team that has yet to find consistency in the NBA.

The Philadelphia 76ers once again enjoyed the greatness of their star center Joel Embiid to beat the Washington Wizards 117-96.

Embiid imposed his strength under the boards to finish with 36 points and 13 rebounds, which he adorned with 2 blocks, in just over 30 minutes on the court.

Washington, which does not yet have its leader Bradley Beal, who is on covid-19 protocol, had Spencer Dinwiddie as the leader with 17 units and 6 assists.

After the victories against the Clippers and Lakers, San Antonio managed to prevail with a great performance from Keldon Johnson, who scored 27 points.

The Memphis Grizzlies snapped a three-game losing streak by beating the Sacramento Kings 127-102 for their 20th win of the season.

Desmond Bane was the top scorer for the Memphis team, with 28 points, while the star of the team, Ja Morant, contributed 18 points, 9 assists and 7 rebounds, to keep his team in fourth place in the Western Conference.

The Kings, who are once again in the middle of a difficult season, had Tyrese Haliburton, with 18 points, 7 assists and 5 rebounds, as their greatest exponent, but it did not prevent them from conceding their third consecutive setback.

With a tremendous game by Canadian Shai Gilgeous-Alexander with 31 points, 4 rebounds and 5 assists, Oklahoma City beat New Orleans to get back on the winning track.

Keldon Johnson scored 27 points and led the powerful attack by the San Antonio Spurs offense to beat the Detroit Pistons 144-109.

Johnson, who added 5 rebounds to his performance, led a group of 12 Spurs players who scored at least 7 points in the game.

The Pistons continue in the middle of a difficult season and this Sunday was their 17th loss in 18 games. Hamidou Diallo was the top scorer of the match with 28 goals.

Gilgeous-Alexander who scored 11-20 on field attempts, added 4 rebounds, 5 assists and 3 blocks to his performance. Argentine Gabriel Deck did not enter and has already been ten consecutive games without seeing action.

Josh Hart had 29 points and 10 rebounds to lead the Pelicans on a night in which Spaniard Willy Hernangómez had 14 points, 6 rebounds and 2 assists.