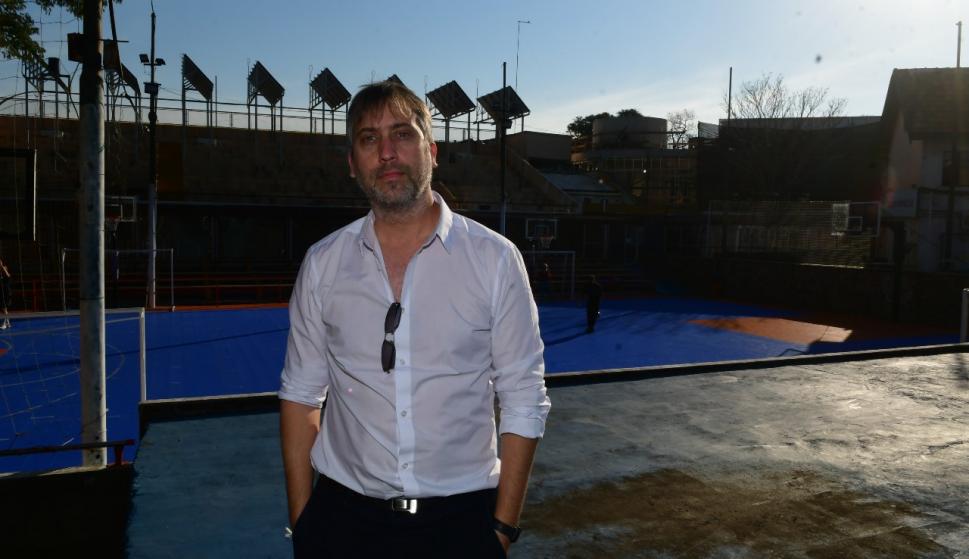 Even a basketball team without a court is missing something very important, because on a daily basis that absence is transformed into something more than a physical space that does not exist. Defender Sporting nowadays he cannot play at home. In 2006, playing on Jaime Zudáñez’s court was forbidden because it did not have official dimensions and with this Defensor had his town taken away. From there they have tried to return to that and this year they have begun the works for the reconstruction of a new club, with a closed stadium.

Having a stadium means “belonging”, he assured, without thinking, Jorge de la Riva, Sports Manager of the club.

“The boy who comes out of here and sees a basketball player who is 10 feet training and shooting is attracted to him. And today we do not have it, today we play in Welcome, the game ends and you leave. Having a court is belonging, not only for the athlete, who trains and plays in the same place, but also for the partner and the fan. You have your stadium, it is a place where you are from ”, he added.

In September of last year the club received authorization to start the works at the Defensor Sporting headquarters, located on September 21, 2362. “Just now they have not renewed the concessions of the place, they have been trying for years, it took a lot to get to all this, ”said De la Riva. And from the moment it was had, no time has been wasted.

Bearing in mind that you already had the idea of ​​building a stadium, why not invest in the rest of the club? The works consist of three stages, the first is already underway, and the club began to implement its plan to finance it. In February they came out with a campaign that exempted tuition and thanks to this they obtained 620 members in one month.

“All the work is paid for with the income generated by the club’s own activity, without having to extract income from basketball or football. The member who comes here and pays 2,350 pesos will see that that money comes back to improve the club. This allows us to put between 800 and 1,000 more partners, which is the attempt. According to this growth, investment is banking alone ”, he pointed out.

Animation of the southeast view of Defensor Sporting Club,

To complete the payment of the works, the social part of the club launched the “premium member” campaign: “You pay 1,500 dollars -up to 5 payments- and you are a member for 5 years with all the benefits (of a non-life member, they cannot vote, until they are 5 years old) and you are paying 65% less than what you would pay the monthly fee. It is a benefit that can also be transferred to another person ”, he explained.

“The bulk of leaders, not all, did their part to be here,” he adds. In total, 319 people have already paid $ 1,500. “With that and a few more coins we paid for the first stage: the frontons and dressing rooms,” he said.

Likewise, Jorge de la Riva assured that with the entry of between 800 and 1,000 people, who pay the 2,350 pesos that the quota leaves, “the club will pay it without ruffling, supported by the premium member campaign.”

“Your name will be on a mural with that of the people who put up money to build the stadium. I paid 1,500 dollars and I have the club for free. I put the money in because I would like that if one day I have children they say ‘look how good this is,’ “he added.

In January the second stage will begin and the third will be the completion of the stadium, the gymnasiums above and the hall. For De la Riva, without the previous leadership, which was the one that achieved it, and the work of the current one, it could not have been achieved.

“Now there is a works commission, made up of people from various political groupings of the club who have control over this issue. It is very good because it gives transparency, which is what the club did not have until three, four years ago, “he said.

The Sports Manager made it clear that the members’ money will only go to the club. “People say ‘but they put money in football and they don’t put money in the club.’ It is not like this. You never get money from soccer or basketball here. What’s more, we give them mats, dumbbells, and cereal bars. The money that comes in for soccer is for soccer, that that comes in from basketball is for basketball, and that that comes in for the social part is for everyone. The money that is put here is put by the partner who comes, the fan who puts money for football ”, De la Riva concluded.

It is the stage that is under development and from there the new distribution hall for the sports sector will come out and two new gyms will be built. On the other hand, the men’s wardrobe will be expanded with universal accessibility.

The hall of stage 1 will be completed by incorporating an elevator. As well as the remodeling of the wardrobe with a children’s wardrobe and including an independent female wardrobe, with universal accessibility. A new mixed room will be built.

Here will come the time of the basketball stadium that will have capacity for 1,200 spectators with retractable tribunes and new independent changing rooms will be built in the basement. “The most important thing for the operation of the club is the gym upstairs. Institutionally, the field, ”said De la Riva. For stage 2 and 3 the club are negotiating with large companies.

“Stage 2 begins in January and from there it is 14 more months to finish the stadium,” stressed De la Riva. After years the fans will be able to be local again and feel at home. Contrary to what many people think, the tennis courts surrounding the club do not belong to Defensor. Asked about the creation of some, he said: “We want to do it.”

Animation of the northern view of Defensor Sporting Club,