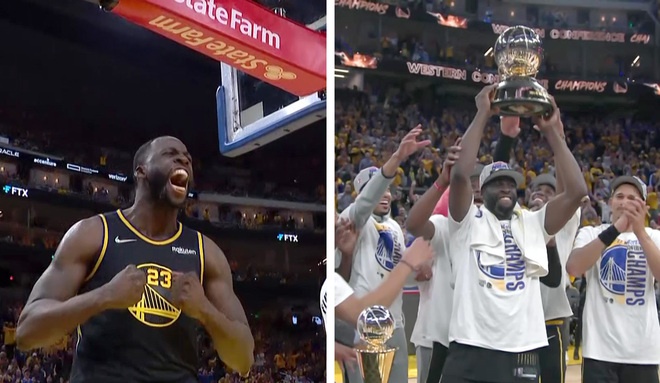 Lyou Golden State Warriors they proclaimed Western Conference champions after winning 120-110 to the Dallas Mavericks in the fifth game of a series that it was decided 4-1.

Draymond Green was in charge of receiving the oscar robertson trophy which credits the Warriors as 2022 Western Conference champions.

The MVP of the NBA Western Finals was Stephen Curry, who won the first Earvin Magic Johnson Trophy as the best player in the Western final.

“We’re all extremely proud of what it took to get back here,” Curry said of the last NBA Finals he played in 2019.

Stephen Curry, Klay Thompson and Draymond Green will play in their sixth NBA Finals in the last eight years and the Warriors become the first franchise since Michael Jordan’s Chicago Bulls to reach six NBA Finals in eight years.

“Six times in 8 years, I don’t even know what to say… I couldn’t be more proud of our guys,” Golden State Warriors coach Steve Kerr said.

Klay Thompson eliminates Doncic from the NBA Playoffs with 8 triples

The Warriors will face the winner of the Eastern Conference final for the title, who dominate the Boston Celtics 3-2 against the Miami Heat.

But Draymond Green has advanced to the sixth game of that series and gives the Boston Celtics as winners, whom he is already waiting for in the NBA Final.

“I don’t like to lose, especially like that. I played terrible. But if we talk about our season, I’m very proud of this team,” Luka Doncic said after a decisive game he lost against the Warriors.

“From everyone, from every player, from every member of the technical staff. Nobody counted on us here. I promise you that we fought until the end. Congratulations to the Warriors. Obviously, they were the best, but I am really proud of this team,” he said. the former Real Madrid player, who signed 28 points (3 of 13 in triples, only made 2 of 10 shots in the first quarter and did not score in the second quarter).

“My defense has to be a lot better. Honestly, I think I’ve made a huge step this year defensively but there’s a lot of room for improvement,” he acknowledged.