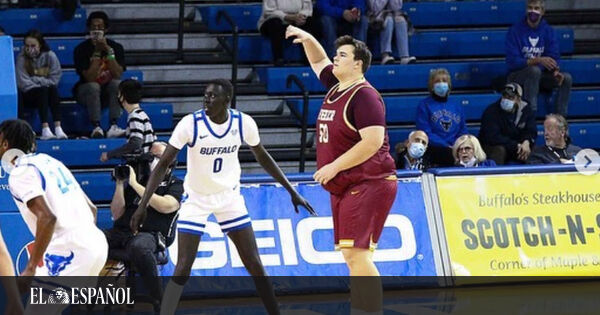 Connor williams He is 19 years old, is 2.13 meters tall and weighs 163 kilos. He is currently a basketball player and participates with the St. John Fisher College in his freshman year as a college student. However, none of this matters. The young American has gone viral on platforms like TikTok or Twitter by literally a fall. The player’s physique draws attention and a stumble during a match led him to the screens of thousands of users. Time has changed what at first could be mocked for an enviable and deserved popularity for ‘Big Cozy‘.

The image that started it all, the fall that triggered the ‘Connor Williams phenomenon’ occurred a few weeks ago during a match between St. John Fisher College and Buffalo corresponding to the New York third division. Williams’ varsity was clearly trailing 76-49 at Buffalo. In one attack, the interior fell under its own foot to the ground. He quickly got up, but the image had already attracted attention: the overweight young man stumbled without contact in the middle of the game.

The background of the play, despite everything, was much greater. Connor Williams got up in pain from a sprained ankle, returned to his position in the rotation and pulled off a perfect assist for one of his teammates. An action to show both his quality on the floor and his perseverance on the court. Days passed, the video was shared and Connor Williams has already generated hundreds of thousands of views.

The videos of his actions on the court are in piles. And, far from showing the failure of a player, they allow us to see an interior with a great vision of the game for anyone who has played basketball at some point in their life. It is not fast nor does it look for the dribbling, but intelligence and power in the paint allow you to sign more than one spectacular play that is just one click away. Something that more than one college player would want at 19 years of age.

The specialized press, in fact, has shown their appreciation for the player. “Connor Williams is one of the most talented basketball players I’ve covered. Great kid too. He deserves nothing but love and respect,” is how journalist Billy Heyen defines him. “It can shoot, it can happen … it is the complete package”, recognizes Rodger Sherman, of The Ringer, with more than 80,000 followers in Twitter. There are videos that even exceed one million views.

THIS MAN GETS BUCKETS pic.twitter.com/jPZhEY5Ryk

Not gonna engage with the Barstool tweets from yesterday, but:
Connor Williams is one of the most gifted basketball players I’ve ever covered. Great kid, too. He deserves nothing but love and respect. Good to see that’s mostly what it has been.
pic.twitter.com/ombaoSgKFi

The most local journalists are not the only ones who have wanted to give Williams a leading role. Until ESPN, one of the reference chains in basketball in the United States, has managed to generate more than 60,000 views in one of Connor’s videos shared on TikTok. In it, in addition to showing off his peculiar physique, his ability to score from the triple or to assist in the painting is proven. “It is a beast“, they get to qualify him in some other account where it surpasses the 28,000 views.

Williams, despite everything, can say that he was present at the All-Great Rochester on two occasions and that he was voted best player of the Monroe County in 2021-

From football to helping the rest

Before basketball Connor Williams tried football. There maybe his physique did fit more easily. However, it is in the sport of the orange ball where he has found his fun scene while studying. cybersecurity. A place to display his physical abilities, which has them, and which have also led him to take advantage of his great popularity.

The compliments towards the 19-year-old do not remain in his basketball skills, but also reach the personal sphere. And it is that Williams, that in Instagram It already has more than 46,000 followers, it has used its virality to release t-shirts for social purposes. For example, as can be seen in his account, he sells this type of garment to allocate five dollars from each to platforms that help local families and athletes without resources who need funds.

The story tells itself. The boy who went viral for a stumble, and who could be the center of mocking and bullying Due to his physique, he has become an admirable face throughout college basketball and he adds visualizations to every action he stars in. What better end to his short but viral career than to release his version of solidarity with the aim of benefiting families without resources.