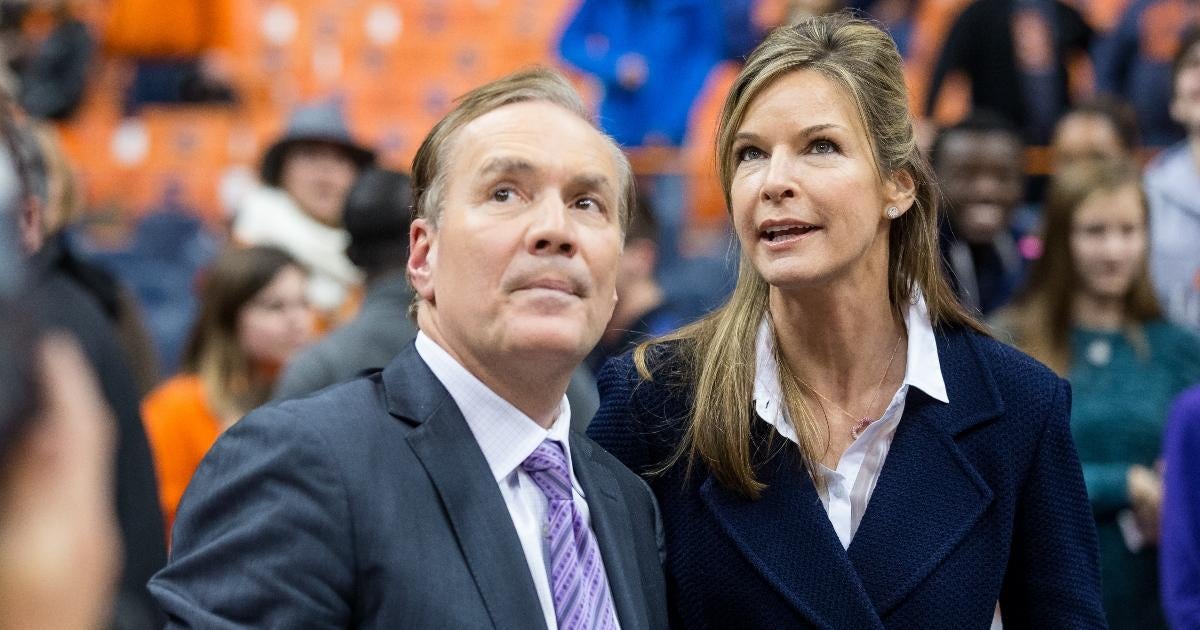 Juli Boeheim, the wife of Syracuse University men’s basketball coach Jim Boeheim, had her purse stolen at gunpoint in Syracuse on Tuesday, according to Syracuse.com. Police said the robbery was reported at 2:08 p.m. local time and Juli was not injured. She was sitting in her car near the entrance of the Cheesecake Factory in Destiny USA when a minor approached her. He spoke to Juli before pointing a gun at her, reaching into her car and grabbing her bag, police said.

The minor drove away with two others in a nearby car. The car they were driving has been reported stolen. Police are asking anyone with information about the robbery to call Syracuse police at 315-442-5222. Juli is a co-founder of the Jim and Juli Boeheim Foundation, which helps children fight cancer in the New York area. According to TMZ Sports, the couple met at the Kentucky Derby in 1994 and married in 1997.

Jim and Juli have three children together. His two sons, Jimmy and Buddy, play on the Orange basketball team. His daughter, Jamie, attends the University of Rochester. Jim Boeheim has spent his entire college basketball career (player and coach at Syracuse). He was a player from 1963 to 1966 and then became an assistant coach in 1969. In 1976, Boeheim became Orange’s head coach and had one of the most successful careers in NCAA history.

In his more than 40 years with Syracuse, Boeheim has led the team to 10 Big East regular-season championships, five Big East tournament titles, five Final Four appearances, and a national championship in 2003. In 2010, Boeheim was named Naismith College Coach of the Year and AP Coach of the Year after leading the team to a 30-5 record and an appearance in the Sweet 16. He also won three Olympic gold medals as an assistant coach for the USA Men’s basketball team. . Boeheim was inducted into the Basketball Hall of Fame in 2005 and the College Basketball Hall of Fame in 2006.