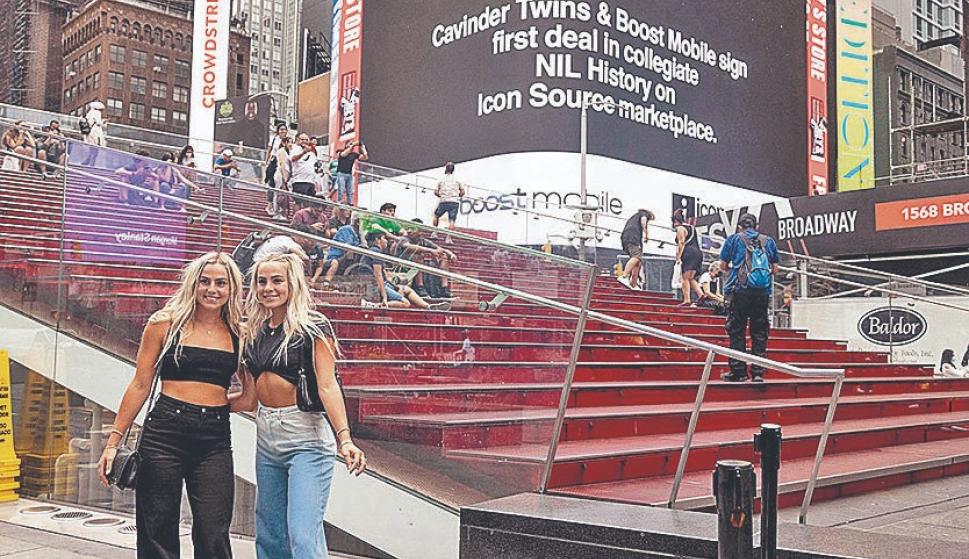 Times Square, the heart of Manhattan with its sparkling and colorful canopies, displays a large advertisement for the telephone company Boost Mobile. Star it Hanna Y Haley cavinder. The twins, 20 years old, are not actresses or singers, but basketball players of the women’s team of the Fresno State University.

More ad campaigns like these will begin to be seen on the batch, on social media, and on showcases in the U.S. after the NCAA, the maximum organization of the college sport from that country, authorized student-athletes to charge for the sale of their image rights for commercial purposes. The measure makes 460,000 athletes who compete in basketball, soccer, American football, ice hockey and baseball available to brands for their universities.

The decision constitutes a milestone: it breaks with the historical prohibition of the NCAA to this type of commercial transaction, considering it at odds with the amateur spirit of college sports.

The change opened the game to the massive entry of brands eager to partner with the great promises of the sport, many of which end up competing in the NBA, the NFL, the MLB, the NHL and the WNBA.

College sports have extensive national coverage and attract the attention of millions of viewers in front of the television and thousands in the stadiums.

College basketball is one of the sports that attracts national attention and wide media coverage in the US (Photo: AFP)

In the new scenario, athletes will be able to collect income for participating in advertising campaigns, doing commercial actions on social networks, starting businesses and signing agreements with agents.

There are also restrictions. Athletes may not engage in promotions for products such as alcoholic beverages, tobacco, and gambling. The NCAA rules that prohibit universities from paying their athletes for their sports performance remain in force, as well as the one that deprives institutions of the payment of incentives to recruit the best talents.

After the regulatory change it is logical to expect athletes to achieve substantial income.

The Cavinder sisters have already closed deals with Boost Mobile and Six Star Pro Nutrition, for a five-figure payment, according to Sports Illustrated. The twins, who also stand out as TikTok and Instagram stars where they have 4 million followers, could make a lot more money now. The estimated annual income for an influencer is 80 cents per follower, according to the advertising standard, so the sisters could bill US $ 3 million a year in commercial agreements, the note adds.
But not only athletes see an opportunity to bill with the rule change. Companies like Icon Source, a marketplace that connects brands with athletes, they hope to pay dividends as well.

The global sports sponsorship industry is worth US $ 48.5 billion, but only comprises the top 1% of companies, agencies and athletes

“The global sports sponsorship market is a $ 48.5 billion industry that is currently limited to the top 1% of companies, agencies and athletes. This disparity will only increase until college athletes have the opportunity to receive fair compensation, “said Chase Garrett, founder and CEO of the company. “There is a tremendous market for brands to connect with athletes in a seamless and affordable way, and we are the only marketplace equipped to handle offers from start to finish,” he explained after raising $ 1.6 million in a funding round in May.

The amateur sport is becoming professionalized with a shower of millions through.

In recent months, several states passed laws that went against the NCAA’s historic ban, while others are in that process. Last March, the US Supreme Court joined, which also opposed that provision. In the face of mounting pressure, the NCAA announced the end of the ban and will now work with Congress to draft a federal law to regulate this issue at the national level.