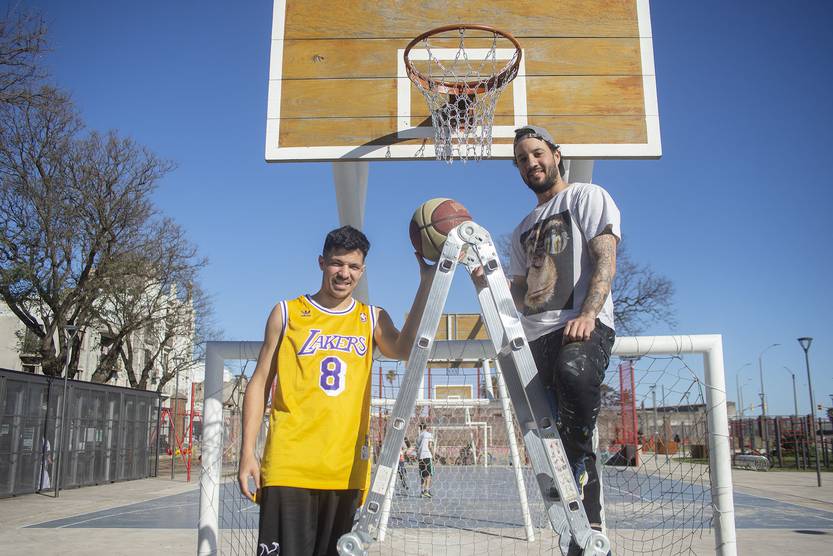 Ramiro likes basketball, and for those who do not know basketball, the first thing to know is that playing it is a sound festival. It is heard on television in the NBA, it sneaks through the radio microphones in the LUB and inhabits every public square where there are players around a board. If I close my eyes, I imagine scenarios and each one of them has distinctive sounds. The grinding of mushroom gum on a parquet court, the ball popping on a floating floor and that same sound, more muffled and scratchy, when the court is made of concrete. But the characteristic sound of basketball, the sound of glory, has its onomatopoeia, and it is written: chas!

There is nothing more important in the sports life of those who play, whether amateur or professional, than listening to that caress from the nets to the ball, and from the ball to the nets. The achievement of the objective, individual or collective. It is the illusion of the newly started child, who with a lot of work reaches a court carrying under his arm a ball almost as big as his humanity, waiting to hear chas! when finally the strength of your arms is enough to project the shot as high as that hoop demands.

That is why it is not strange that Ramiro Pérez felt that the hoops of the Palermo court, a neighborhood that breathes basketball between tambourines and seven and three, lacked his soul because he lacked nets.

Then a jug, inside his house, in the central courtyard, Ramiro realized that he had something that the neighborhood did not. The hoop at home, where he could play with his brother, his old man, and a few other friends, had a good quality string net, like the one his square lacked.

They called him a dreamer – actually they called him crazy, which is the same thing – when he decided that he would take out his private network for everyone to enjoy. And with that small gesture, he unleashed an endless chain of transformative actions. Because when he put the net on the board of Don Bosco’s little court, the one that the skeptics told him they were going to steal in a few days, he not only put music to each double, he also painted and repaired that piece of metal that the wind from the south it rusts to pure saltpeter.

Those who were sure that these networks would be stolen were not lying, it is fair to say it. But not even drawn on a blackboard by Víctor Hugo Berardi -formed in Athens and glorious with Welcome- the play could have gone better for Ramiro. “During his lifetime someone stole it,” he recalls, “but the same users recovered it and placed it again.” That shot is worth triple. “I do not know who took it or who recovered it, but I know that it came back,” rounds off his anecdote.

And he knows well, as the boys and girls of Palermo know, that since then the field was no longer no man’s land, it was their land and their desire to share it with everyone. So the gurises repaired the boards and agreed that no one would graffiti them again, neither with Welcome graffiti nor with Athens graffiti, the clubs that are identity in those blocks. They also painted the field and even put art in the center circle, as in the first-rate fields. PALERMO, well painted, was a message that impacted so strongly that when Estrella Del Sur, the baby soccer team that has its field next door, won the Participatory Budget to improve its facilities, Municipality B included on its own initiative the improvement of the basketball court that doesn’t have a club, that doesn’t have a box, that has gurises playing every day.

One thing led to another, because now the hoop in his house had no net and his father put one of chains on him, as best he could, with intuition. That was the second seed, because then Ramiro picked up the glove and, as is done now, he studied the techniques for making chain networks in YouTube tutorials. “I set up two networks to donate to the Plaza Seregni, which was something that I had pending for a long time,” he says with pride, because they are still there to this day. The theory is simple: “When people know that the squares are in good condition, more gurises go to play”, and to that is added concern, transformed into affection, when “when passing through other squares, seeing a square without a net, I wanted to be able to do it, and I realized that it was not taking me much trouble to come up with a solution that otherwise would not arrive; I lent myself to do it and to help ”.

The artisan of the nets tells his process. “I buy 50 kilos of chains and cut links. That network you see there has 80 cut links and each network carries from eight to eleven meters of chains. You open them, place them and close them. It is quite laborious but it looks good ”. Before, it took him several days to make a net; now in two hours it is complete. Practice makes a master. “It is important to have a ring to use as a mold, and it is also important to adapt to the rings according to the number of hooks they have.”

Now people ask him to put his nets in other squares, in other neighborhoods. Through your Instagram account@ 321cha, promotes the placements and restorations of boards, and even makes monthly votes: to the place that wins it donates nets. He works for this with his friend Martín Cabrera, who is also a visual artist.

“I relied so much on basketball, that as a way to give back what he has given me I do this. It motivates me to know that if one day a guru wants to go play, he will find a court like I find it when I go, “he says.

A long time ago it was proposed as an objective to place nets in all the courts of Municipality B, his, which has 15 public spaces with basketball hoops. He submitted a project for funding and it was approved. With all the material purchased and waiting for the funds to be executed by the Municipality, formal obstacles began to appear, because of course, Ramiro was not a supplier of the State. Then he stopped waiting for solutions and, without external financing, in 2021 he completed it, putting the nets of the ten remaining fields in a period of two months, paying the cost of the chains out of pocket.

In addition to all of Municipality B, there are networks of theirs in public schools and high schools, including the IAVA, in housing cooperatives, including Covisunca, where there is a basketball school for children, on the field that is outside the Antel Arena, where they were placed before the inauguration of the stadium and still remain, in Solymar, Pando, Las Toscas and also in other departments such as Rivera, San José and Colonia. For some time he has also collaborated with the INAU, receiving donations of old rings that he later restores to place, with chain networks, in homes where children and adolescents can enjoy them. He no longer just donates: he also sells to individuals, because many want to have the sound of the chains in their homes every time they score a shot.

It would be disrespectful to tell Ramiro that he is the owner of the changes, because if he knows anything about it, it is about sharing what he does. But surely he is responsible for that first gesture of love towards the field of his neighborhood, of romanticism for thinking that that network that decided that it would no longer be his, but the neighborhood, would last; and like that, then so many others. Ramiro imagined the court he wanted to play on and, since then, he has not stopped sharing his imagination with others on other courts, on other boards, with more knowledge and closing, link by link, the chains that catch the dreams of the children every time they arrive at the square.

Chas: the project that placed chain nets on all basketball hoops in Municipality B