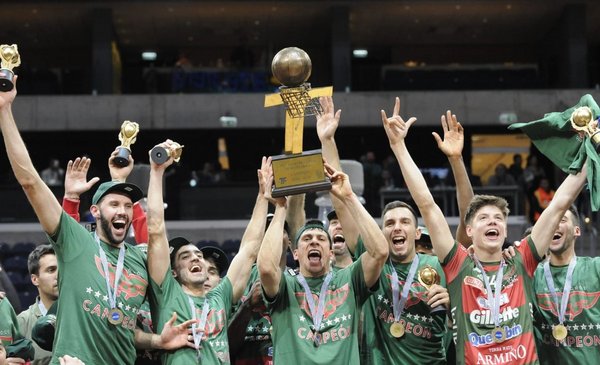 It had four courts. Some borrowed, like the first three: where he was born in Plaza de Deportes No. 1; at the end of the 1920s and in the 1930s in Lenguas 1414 almost Sierra (currently Fernández Crespo), and since 1944 in that of Fraga and Enriqueta Compte y Riqué (where radio Sarandí is located). And his own property that he inaugurated on September 6, 1952, where the club is currently located on San Martín Avenue, where Arenal Grande Street ends (or begins), in the place where there was a tenement.

His sports conquests, his four-year term at the Federal from 1940 to 1943, the first in basketball (the second was achieved by Welcome between 1997 and 2000), his figures that transcended internationally, is the history known in these 10 decades. However, there is one aspect in the life of the institution that gave it a different place in the sport: its popularity.

How did you build your identity and captivated thousands of fans to become the most popular club in Uruguayan basketball?

Consulted leaders of Aguada do not find a starting point to explain this phenomenon.

The club’s general secretary, Daniel Olivera, says: “It’s something that accompanied the club since I remember it, in the 1960s”, but he doesn’t know where or how its popularity was born specifically.

Óscar Bonino, club historian, cannot specify a reason but a series of events that occurred over the 100 years, but he says he has a theory: “With Goes we fed a very important classic, the club fought many promotions and relegations, he was 10 times champion, and that generated the sympathy or the distance of the people with Aguada”.

To understand this phenomenon of Aguada’s popularity, which has no starting point, we must consider some elements that kept the call of the club alive (while others faded away such as Sporting, Atenas, Stockolmo, popular 100 years ago), multiplying the fans and reinforcing with success, in all generations, the sympathy that the club aroused.

It emerged in the fermental time of physical activity in Uruguay Driven by the sports arenas and the birth of dozens of clubs, Aguada was an inspiration or split from Olimpia, one of the most powerful sports clubs of that time, in athletics and basketball, and its founders had sports links with those who later became They settled in Columbus.

“In February 1922, the youngest inhabitants of Plaza de Deportes No. 1 that had settled in Aguada decided to create another club inspired by the veterans of Olimpia. At the end of February of that year Club Atlético Aguada was born. He used wings for his shield, the same ones that Olympias used. Its first president was Alberto Pesce, linked to Olimpia and a member of the white machine of 1928 and 1929, and his brother Víctor was Federal champion in 1923 and in the bi-championship of 1928 and 1929”, tells the official history of Olimpia, in his book of the Centenary.

In March 1927 all the clubs were evicted from the square and Aguada stayed in the neighborhood. Olimpia first moved to Saroldi (on the site of the old Olimpia FC, which later became the current River Plate), and in 1933 Passadore took it to Colón.

On the field on Calle Lenguas, in front of the Legislative Palace, he built his identity with the neighborhood and proximity to a populous area of ​​the capital.

The rivalry with Goes

Goes was born from Aguada in 1934 and that fueled a rivalry, which in sports can only be compared to the one between Nacional and Peñarol in soccer..

This phenomenon between neighborhood residents (their courts were a short distance until today) multiplied the passion and divided the fans, and the neighborhood.

At that time Sporting, el dean, Atenas and Olimpia (by order of foundation), were the most popular clubs, and they met Aguada and Goes who arrived to establish a new point of attention with noisy fans, which broke the show climate. of theater that basketball had in those times. Goes won his first Federal in 1939. The same year that Aguada lost 28 players and his sporting continuity was in danger. That was an alarm clock for what would happen later, the successes of the rojiverde in the 1940s.

In addition, basketball, which historically was a sport in which neighborhoods faced each other, also saw how Aguada generated rivalry with Trouville (founded in April 1922), one of the strongest that remains to this day, and with Olimpia.

Aguada, a Segunda team since it joined the FUBB in 1925 and until the 1930s, was about to be disaffiliated in 1936, a fact that far from weakening it strengthened it.

In 1939 he saw how Goes, a rival of all hours, with just five years of life and emerged from his guts, won the Federal.

That was the alarm clock. Aguada won the four-year term from 1940-1943 and won his fifth Federal in 1948. In those years he built a particular popularity in a sport that drew crowds, despite the reduced capacity of the club courts.

To understand the passion that basketball aroused in those years, it is enough with one detail: on November 3, 1949, Uruguay played against Phillips 1966 on the court of the Centenario Stadium and they sold 19,839 tickets, the public record in a basketball game. In uruguay.

The successes and the crowd that followed the basketball fed multiplied the number of followers. Aguada fans at the Antel Arena

This shows that Aguada was champion every 30 or 40 years, which allowed all generations to have seen a champion Aguada. This phenomenon did not occur with other centennial clubs that were champions such as Olimpia, Sporting, Atenas Unión Atlética and Welcome (it is 95 years old) and popular as Goes.

Trouville, also a centenarian, has a history similar to that of Aguada, with the 1973 vice-championship, which the club experienced as a title and kept its fans captive and multiplied.

Aguada had its last impulse in the last 10 years.

To add to its mass of faithful or admirers of its insignia, when in 1979 the FUBB voted that its competitions passed to the professional regime, they came to defend their jersey Granger and Bacon, two foreigners who made basketball a spectacle.

At that moment television took this sport to every corner and became a fan multiplier. At that time, Goes no longer faced the aguateros, who monopolized the attention among the followers of the sport and those outside the activity.

In 1936 they were one vote away from disaffiliation from the FUBB because the Aguada delegate included by hand the name of a player that River had deleted from the list and in 1963 he was disaffiliated for a year due to incidents with Sporting. That is why, throughout his history, he nurtured unconditional love with his followers and with his rivals insurmountable differences, which enhanced the fanaticism of his followers.

Thus, over 100 years, with successes at key moments and at least one title in each generation, with events that marked its history and with the rivalry that it historically had with Goes, it built this popular phenomenon in the sport.

Centennial passion: how did Aguada build its status as the most popular club in basketball?