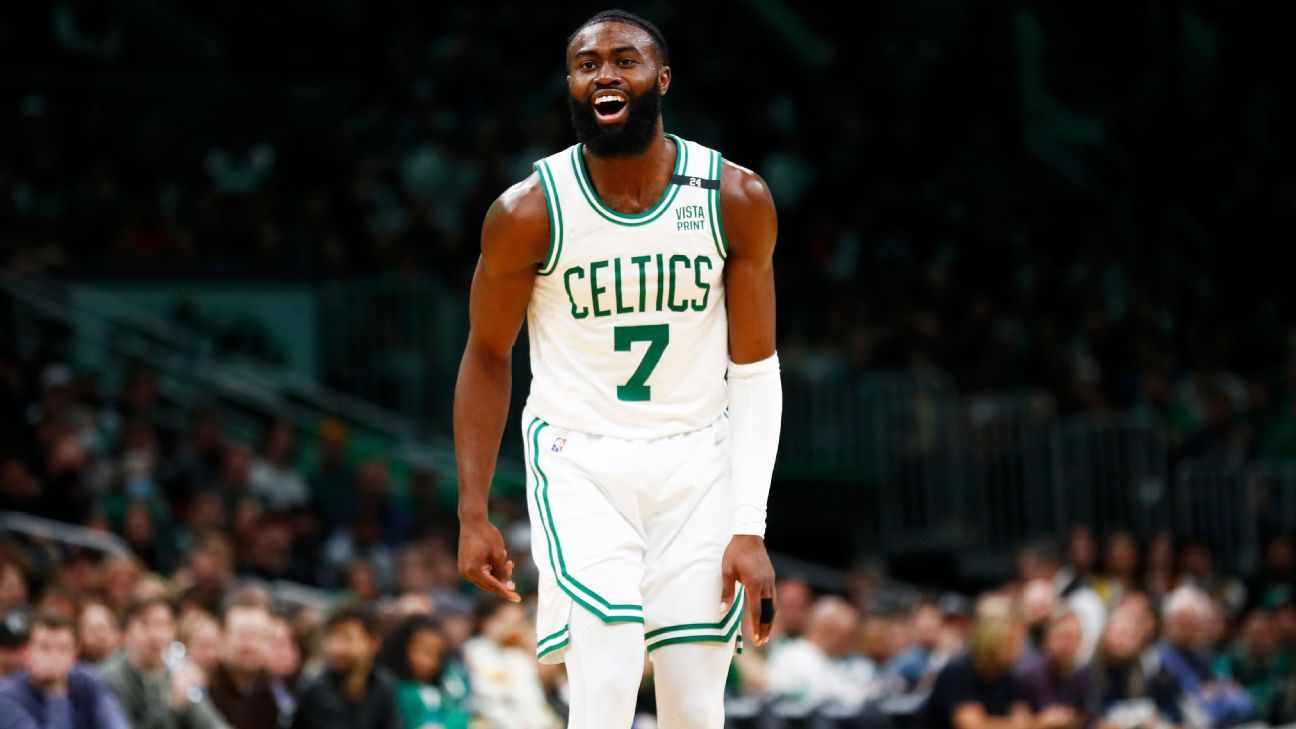 LOS ANGELES — Running out of adjectives for some enormous Boston Celtics (23 wins in 27 games) and who starred in the NBA on Wednesday along with some Golden State Warriors who were resurrected in Miami and some Brooklyn Nets who could not beat the Memphis Grizzlies.

With 26 points each, the shooting guard and forward led the Celtics to a 125-97 victory over the Jazz. Donovan Mitchell broke it with 37 points but it wasn’t enough.

The fifth straight victory for the Boston Celtics came by blowout as the Utah Jazz trailed by 30 points in the second quarter against an overwhelming local team that ended up scoring 59.5% of their shots and 52.8% of their triples (19 of 36).

Jayson Tatum and Jaylen Brown, with 26 points apiece, led the Celtics in which Al Horford had 9 points, 6 rebounds, 3 assists and 3 blocks in 31 minutes.

Donovan Mitchell (37 points and 6 rebounds) was the only one who raised his voice in a Jazz in which the Spanish Juancho Hernangómez, after four consecutive games as a starter, returned to the bench and played 5 minutes without leaving a mark on the statistics.

The Warriors handed the Heat their second straight loss, with a tremendous performance from Jordan Poole, who left with 30 points and 9 assists.

After three losses in a row, the last against a very poor Orlando Magic throughout the season, the The Golden State Warriors took a breather perhaps in a duel in which no one expected it: during their visit to the Miami Heat, leader of the East, and without Stephen Curry, Klay Thompson and Draymond Green.

Jordan Poole (30 points and 9 rebounds) led this great victory for the Warriors while Kyle Lowry (26 points and 9 assists) was the best of a weak Heat on rebounds (34 to 45 of their rivals).

The Mexican-American Juan Toscano-Anderson played 2 minutes without reflection in the Warriors’ statistics.

Without Ja Morant, the Grizzlies beat the Nets 132-120. Irving broke it with 43 points in the loser, while Bane and Melton were the top scorers in the winner.

Great games from Kyrie Irving (43 points and 8 assists) and Kevin Durant (35 points, 11 rebounds and 8 assists) were not enough for the Brooklyn Nets to come away with a win from their visit to a Grizzlies without Ja Morant.

Desmond Bane and De’Anthony Melton each contributed 23 points for a Grizzlies that destroyed the New Yorkers from the triple (19 of 38 for the Memphis, 9 of 25 for the Nets).

The Spanish Santi Aldama did not have minutes in the Grizzlies.

Philadelphia worked to beat the Los Angeles team that didn’t have LeBron James. It was 126-121 with Embiid leading the charge with 30 points and 10 rebounds. Harden added 24 points.

Without LeBron James, due to discomfort in the knees, Los Angeles Lakers sold dearly their defeat against the Philadelphia 76ers who took the victory of the Californian city with more craft than brilliance.

Phoenix beat Minnesota with great tasks from Ayton (35 points and 14 rebounds) and Booker (28). For the Timberwolves, Edwards had 19 points and Bolmaro scored 1 point in the minute he played.

Six wins in a row lead to an imposing Phoenix Suns and that enjoyed a huge Deandre Ayton (35 points and 14 rebounds) to defeat the rising Minnesota Timberwolves that only deflated in the last quarter (28-42).

The Dominican-American Karl-Anthony Towns had 15 points and 11 rebounds for a Wolves who suffered from the Suns’ 52.3% shooting success.

Despite Doncic’s absence, Dallas beat Houston 110-91. In the winner, Brunson stood out with 28 points and Dinwiddie with 26.

Despite playing without Luka Doncic due to ankle discomfort, heThe Dallas Mavericks did not suffer too much to prevail in the Texan duel against the Houston Rockets who are colistas in the West.

Jalen Brunson (28 points) and Spencer Dinwiddie (26 points and 6 assists) showed the Mavericks the way to victory while Alperen Sengun (14 points and 11 rebounds) stood out in a Rockets denied from the triple (4 of 28).

The New York team beat Charlotte 121-106 and returned to victory after two games. Barrett led the winning team with 30 points, while LaMelo Ball had 32 points for the losing side.

The Charlotte Hornets snapped their five-game winning streak. when falling against the New York Knicks of an RJ Barrett who scored 30 points for the second game in a row.

The Knicks were very solid throughout the game, they were already up by 20 points in the second quarter and ruined the very good performance of LaMelo Ball for the Hornets (32 points and 9 rebounds).

Detroit had a spread scoring to beat Atlanta 122-101 at home. In the winner, Grant stood out with 21 points and 8 assists and Cunningham added 17. On the visit, Trae Young contributed 21 points.

Just one day after storming Madison Square Garden, lhe Atlanta Hawks froze on the court of the Detroit Pistons, who are fighting with the Orlando Magic for not being last in the Eastern Conference.

Jerami Grant (21 points and 8 rebounds) was just one of the eight Pistons players with more than 10 points while in the Hawks the best was Trae Young (21 points and 9 assists).

The Kings defeated the Pacers 110-109, with an agonizing basket by Damian Jones. Davion Mitchell was the figure of the team with 25 points and 7 assists.

A tap by Damian Jones with 0.2 seconds to go gave the Sacramento Kings an “in extremis” victory against the Indiana Pacers who left with their heads lowered after a very tight finish.

San Antonio beat Portland 133-96 on the road. In Popovich’s team, Murray stood out with 28 points and Johnson with 26 points.

Dejounte Murray (28 points, 6 rebounds and 7 assists) guided the San Antonio Spurs to an emphatic victory over the Portland Trail Blazers that allows them to continue dreaming of play-in in the West.

Ben McLemore (23 points) stood out in a Blazers that suffered the 19 triples of the Spurs.

The Thunder beat the Orlando team 118-102, which is sinking in the Eastern Conference. Theo Maledon, top scorer of the night with 25 units.

Oklahoma City Thunder closed his terrible losing streak of ten straight with a victory against an Orlando Magic who also walks in the last positions of the league.

Theo Maledon (25 points) excelled for the Thunder while Chuma Okeke (19 points) did the same for the Magic.