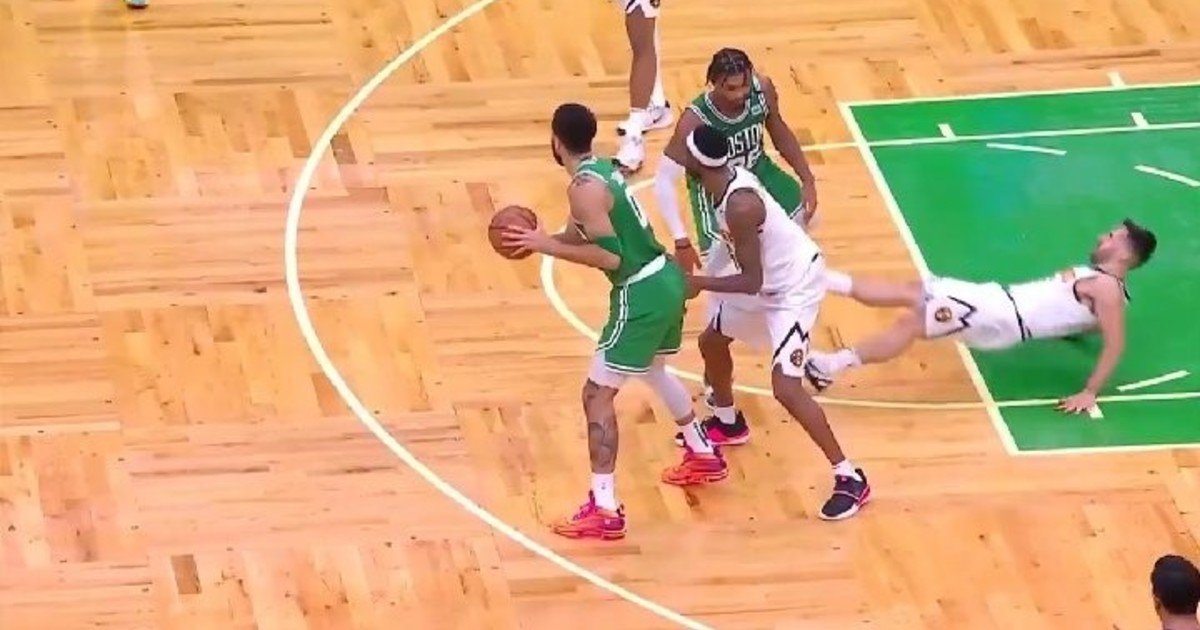 I didn’t play. Or he was doing it less and less. Almost in a disrespectful way under the famous excuse of a particular rotation that made him more the protagonist of the substitute bench than the parquet… The link between Facundo Campazzo Y Denver Nuggets seemed broken. Coach Michael Malone, suddenly, gave him so few minutes of play that the trade, that the exchange with the franchise that was, was a currency that was listed. But the times are over the Cordovan stayed and, in the first change, when he had the little opportunity left, he had a game to silence voices… Beyond the result and some somewhat violent circumstance that harmed him.

The Boston Celtics beat the Denver Nuggets 108-102 on Friday in a tight game that marked their seventh consecutive victory thanks in part to the help of newcomer Derrick White. The Celtics, in seventh place in the Eastern Conference and having won their previous six games, were hosting the Nuggets, in sixth place in the West and who had just won their last two games.

The best of the match and tickets on the rise

The most outstanding player of the game was Nikola Jokic, who got the triple double of 23 points, 16 rebounds, 11 assists and two blocks. Facuon his ‘return’, he was not far behind with 14 points (1-3 doubles, 3-6 triples, 3-4 free throws), four rebounds (two offensive), three assists, one steal, one block, two turnovers and five fouls in 29′ 28” (a few thanks to Monte Morris’s injury).

For his part, the best of the Boston team was Jayson Tatum with 24 points, 6 rebounds, 5 assists and 3 steals. Robert Williams III got a double double of 15 points, 16 rebounds, 2 assists, 2 steals and 3 blocks. Newcomer Derrick White also had an outstanding performance for the Celts with 15 points, 6 rebounds and 2 assists in decisive moments. Boston announced Thursday the signing of White in a deal with the San Antonio Spurs for Josh Richardson and Romeo Langford. The Celtics have also acquired Houston Rockets shooting guard Daniel Theis for Dennis Schroder, Enes Freedom and Bruno Fernando.

Many TD Garden fans paid for tickets tonight, after the last series of victories, more than double what they did two weeks ago (the cheapest ones went from 39 to 89 dollars).

Campazzo and his vindictive game against the Celtics. (Denver Nuggets Press photo)

A closed and spicy finish

Although the visitors were ahead on the scoreboard for more minutes, the tight game ended with a 108-102 victory for the Celtics that brings them closer, after seven consecutive victories, to a position to play the playoffs. For its part, Denver was sixth in the West with a record of 30 wins and 25 losses and this Saturday, they will face the Toronto Raptors as a visitor from 9:30 p.m. (Argentine time).

The game, likewise, had a very controversial move on the ending that could change things. In the last stretch of the confrontation, the Colorado franchise had the opportunity to discount the score and dream of a comeback. However, a controversial arbitration decision on a play that had Campazzo as the protagonist, sentenced the defeat for Denver.

In an offensive play by Boston, which won 100-97, Facu ended up lying on the floor after receiving a strong push and a slap in the face from Marcus Smart. The judges reviewed the action and, after a few seconds, charged Campazzo with a defensive foul and called Smart’s aggression a “natural basketball play.” The impression he gave was that the miss was the other way around… What could have been an attacking foul and two free throws for Denver ended with a pair for Smart, who didn’t miss and stretched the lead to 102-97. What did the Cordovan say at a press conference? “The play did not define the game. It was just another situation in the game. If it had been for us, it could have changed the closure. But We lost because of other aspects of the game.”

The games for this Saturday

Campazzo: between a hopeful return and a push that defined the night