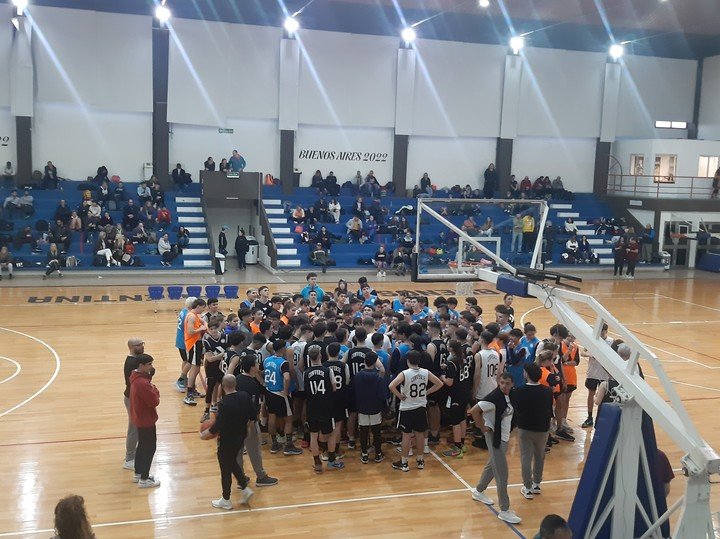 Facundo Campazzo Y Nicholas Laprovittola they returned to the country to train with the Argentine National Team for the next window of FIBA ​​Qualifying and Americup 2022. But, in addition, provided a campus for three days to a hundred boys and adolescents of both sexes at the Cenard.

One hundred boys and girls from all over the country participated in the campus.

The ProCamp campus is a basketball clinic that Facu and Lapro give every year in the country, since 2017. A group of coaches and special guests also work there, like Sergio Oveja Hernández and Fabrizio Oberto. This edition comes after a two-year hiatusbusy due to the pandemic.

“We really wanted to do it again. To see new faces again, and the old ones, who have been coming for several years. He missed being like this. And I see everyone with the same joy too. The same predisposition of the parents, who are making a great effort to bring their children. They came from Misiones, San Luis, Córdoba…”, Campazzo told a press conference where Ole was present.

“Our goal is to give kids something that works for them, both in-game and socially. The idea is that they can absorb values ​​such as respect, camaraderie, work, and that they not only apply it in sport, but also in life itself. Because maybe tomorrow someone doesn’t want to play basketball anymore and wants to dedicate himself to something else, “added the Cordovan.

Laprovittola and Campazzo, a friendship of many years.

Laprovittola, for his part, was also happy to work with the boys: “Being able to be with them and see how they connect and become friends fills you with energy and a very good vibe. I feel very identified with each one, because I was in the same position they are in today. We want the boys to take something from here, especially at their age, which is a time when you have to take advantage of everything”.

The bases and the Selection

The hosts also talked about the upcoming duels with the National Team. The first will be on August 25 against Canada, as a visitor, and on August 29 against the Bahamas, in Mar del Plata. Both, for the FIBA ​​Qualifying for the 2023 World Cup.

“We are in a new process. I couldn’t be in the last window, but I kept in touch with him (Campazzo) and the guys. The goal now is to be able to play better than that last window. I think that Canada will be an even tougher rival and then, at home, we have to win. The match in Mar del Plata is going to be very nice, but the goal is to prepare ourselves in the best way and start playing together again, connecting and giving everything”, Laprovittola told I heard. The Buenos Aires native comes from being runner-up with Barcelona and integrated the ideal quintet of the ACB League.

Campazzo, for his part, added that the team will improve with the arrivals of Laprovittola and Gabriel Deck: “Now, With the incorporation of Nico, from Tortu, we take a leap in quality. The team changes a lot. and empowers those of us who came from the last window. So we have to take advantage of that, and also take advantage of the new young people. We have to give ourselves 100% to Néstor (García), because he as a coach is going to give us 100% too. He knows how to give confidence to each one of the players and make us play very well, so we trust that.”

They are not the most experienced on campus, that honor goes to Charles Delphine, the member of the Golden Generation that Néstor García He decided to take it back into account after his good performances at Pesaro in Italy. “Having people of that level and with that experience, like Carlitos, is always good. It adds up at any time and in any situation, ”said Lapro (32, one more than the Cordovan) about the 39-year-old player.

“Having Carlos is a plus for us. He is a super positive leader, both inside and out. It gives us that leadership that perhaps is also what this group needs, added to what those of us who have been here for a long time can contribute,” explained Facu. As for his future, the former Denver, wanted by Real Madridwarned: “We have to wait. The truth is that the market is a bit stagnant. The priority is to have another opportunity in the NBA.”

After the withdrawal of louis scolathe one who took over the captaincy of the selected –by appointment of Che García- It was Campazzo. However, the base said that the absence of the eternal captain is still noticeable, not only in the group, but in all those who work around the team: “Louis is irreplaceable. Having him was a very good thing for us. Not just for gamers but for the entire Argentine National Team, including the people who work behind”.

“Those of us who have been here for several years have to try to make the leap in quality. Lead and offer our experience for a common good that is the National Team, and trust in our work, which is what we did with Luis. We have to rely on preparation, work hard, train and prepare ourselves in the best way for whatever it is, whether it’s a window or an Olympics”, concluded the Cordovan.

Campazzo and Laprovittola played with 100 boys