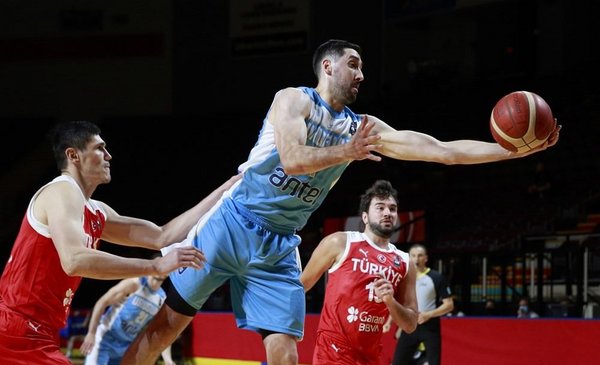 Why come back with so much career ahead? How are you with the injury that radiated you for the second half against the Czech Republic for the Pre-Olympic? What memories do you have of facing Aguada? About all this, the power forward from Artigue chatted with Referee.

“The last year was very hard from the emotional point of view because of the pandemic,” he said.

After closing his successful cycle with San Lorenzo, Calfani went to play Japan’s Kawasaki Brave Thunder in mid-2019, but at the end of the year he injured his knee and in March 2020, the tournament was canceled. “I came to Uruguay and I made eight months of recovery. In the first three months I was locked up with the teacher and the kinesiologist, unable to see my family and friends. When we returned to Japan with my wife and daughter, it was hard to cope, ”he said.

“Until the injury, my season had been very good, we were first and they considered us winners in our area. In the second season, when I was on the court and played, I felt good contributing to the team. We won the Japan Emperor Cup that is played every year between the three divisions. The previous year I had just injured myself before the final, “said the first Uruguayan to play in Japan.
Calfani and her family lived in Kaswasaki in the Kanagawa province, 30 minutes from downtown Tokyo: “A beautiful, quieter area; Tokyo is a bit overwhelming. Always give me the tranquility of Artigas ”.
“The cultural change was great. When you are a resident, in Jaón they want you to incorporate their rules where respect is the highest good. All people are supposed to have the same respect on trains, at lunch, in training sessions, when leaving the stadium ·, he revealed. His arrival at Kawasaki Brave Thunder in 2019

Food was quite an affair. “Lunch was with the staff, but there came a time when in three months I lost four kilos and I had to ask for a change in diet and incorporate chicken, salads and pasta. They make pasta different, they eat a lot of seaweed and seafood, most of them raw. The strangest thing I ate was a seaweed soup with rice, very spicy, and on top of it with sticks with which I didn’t even grab a piece of rice, ”he recalled laughing.

In the second season, the arrival of Spanish Pablo Aguilar with his partner made his stay more bearable.

Calfani played a game and a half at a high level in Victoria, where Uruguay surprised the basketball world by planting him a tough battle against Turkey, which turned the game around with 4 minutes to go, already Czech Republic against which he had a winning shot from Jayson Granger that did not enter. Subsequently, the Czechs defeated Canada and Greece to win the ticket to Tokyo. The open shot, a weapon that has polished a lot in the last five years

“It was very difficult to be 100% focused on the positive case of covid-19 (Nicolás Borsellino) a day and a half before playing. We were almost two days to arrive, we had a single week of training with the full roster. Everything seemed to be uphill and in the end we had our reward ”, he said in reference to the competitive level that Uruguay showed.

“Now I feel warmer than before because we couldn’t close both games. Anything could happen with Canada. I think the group was very close, as it had not been for a long time and everything that happened was because Rubén (Magnano) was more convinced than anyone that you could compete and win“, he claimed. Calfani could not go out to play the second half against the Czechs. He had a fall that caused severe pain in his lower back. “I did 20 minutes of cycling but the pain did not ease and it did not allow me to move normally, but I am fine now.”

“I skipped the thermal”

After the match against the Czech Republic, Calfani had an exchange on bad terms with a rival player. “He was just against our bench when he finished and the thermal jumped, I immediately jumped and told him to go celebrate with his bench. But he immediately explained that it was an instinctive reaction due to the tension of the game. We were very close. It is not known what It would have happened if we could have Jayson (Granger) in that game against Puerto Rico to go to the World Cup in China. it has to be a kick for the future, to show us that we are up for great things and that there are talented young people like (Santiago (Véscovi who played two incredible games that I am very excited about).

Power forward took two weeks off and last Monday he began his physical set-up pointing to October, the date on which the next Uruguayan League will begin. “The first two, three weeks are going to be about conditioning, getting strong, balancing all the muscular part of the body.”

“For many seasons I played without being able to fully recover from injuries. This stop is also good for me to put myself at 100%, “he said.

Calfani began training at Enocus where he already has a stable team of physical trainers and works on individual technique with Pablo Ibón, Hernán Laginestra’s technical assistant in the last League champion, Biguá.

With Aguada signed a one-season contract. Why Aguada? “Because it is a team that fights for important things, that is building a team with many names and weight and because it represents a unique opportunity to be with my loved ones and at the same time compete at a high level; Aguada demands that you give your maximum to win, it demands that you be 100% “.

The other confirmed national chips are Federico Bavosi, Federico Pereiras and Sebastián Izaguirre. The one who does not follow is Mateo Sarni.

What about Leandro García Morales? Referee He consulted vice president Daniel Olivera who said: “If he plays, he will play in Aguada. We already have your word on it. He has returned from his vacation and is thinking about whether to retire or continue ”.

The team hired Venezuelan Daniel Seoane as coach, technical assistant of Néstor “Che” García, and to Argentine Marcos Mata, ex San Lorenzo, as one of his three foreigners.

“We are looking for an athletic and strong pivot and a base guard-help,” added the manager.

“With Mata I played for three years in San Lorenzo. He is a team player, he will not come to score 20 points per game because he is a player who dedicates himself to doing what he has to do for the team to win, ”said Calfani.

“He is a great defender, You can mark the three rival, change to mark the 4 or 5 or take the mark to lower the goal of the best scorer of the rival. In attack he is very good too, He has a very good hand of three, is very strong with his right hand and when he penetrates and takes advantage he ends up very strong on top. It will give the team temperament, “he added.

“I always liked playing against Aguada because of the spectacle that his people put on. It motivated me; I had them against me and now I am going to have them on my side, I hope that people can return because every time I played it was lived like a party because they put together their own game, with emotion or even on the verge of tears. Now feeling him on my side is going to be very nice, “he said, anticipating feelings.

“I remember from the League before I left (2014-2015) that Aguada was very strong at home and they had a very good team, but we went and beat them. I walked very well and I really enjoyed playing against all those people. They bitch me a lot, but when they insult you the most it is because you are doing things well ”, he said to the laughter.

Now he has to feel that special climate that Aguada generates in each game – if the pandemic allows it – in his favor.