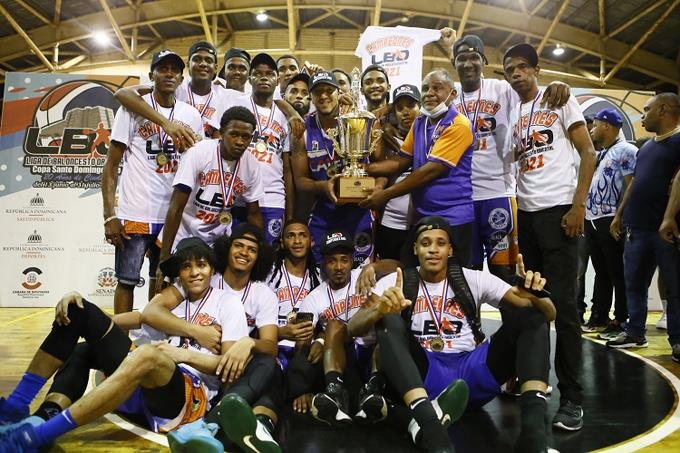 The Calero club was proclaimed this Thursday champion of the First Superior Basket Tournament of the Santo Domingo Este Municipality, which had as its official stage the sports center in the Invivienda sector.

Calero’s squad beat Pueblo Nuevo in the final game 85-78, in an unprecedented final series, since both teams are neighbors of the Villa Duarte sector and its leaders, champion Miguel Reyes (Moreno), from La Francia. , and Santos Tolentino, from Pueblo Nuevo.

Calero dominated the finalist round 2-0 by sweep, agreed to a 3-2, and won the Santo Domingo Este Cup in the tournament dedicated to the 20 years of the founding of the city of Santo Domingo Este and organized the Basketball League Oriental (LBO), chaired by Amaury Peña.

Reinforcement Richard Bautista commanded Calero’s offense by scoring 24 points, on his second night followed by 20 or more scored, after the 28 of Wednesday’s triumph, 80-79, which he decided with two free throws. He tied 52 points for an average of 26.0 per game.

His outstanding work led him to be awarded the MVP of the final series, by the specialized basketball press that covered the final incidents of the LBO.

For Pueblo Nuevo, Jassel Pérez scored 32 points and six rebounds, and Ezequiel Pérez made 22 baskets and 12 balls caught for a double-double.

The president of the Calero club, Andrés Liberato, expressed his satisfaction at obtaining the title of champion of the superior basketball tournament in Santo Domingo Este and thanked its organizers for the effort made to mount an event of a high technical level.

“This was the joint effort of players and coaches to achieve the goal that we have reached tonight (Thursday) and take the champion’s crown,” said the veteran manager.

He exclaimed that “I dedicate this championship to my friend and compadre Alfonso Hurtado, who died last week of a heart attack and was the club’s general secretary and my 40-year-old partner.”

This is for you Fonso, wherever you are, my brother!