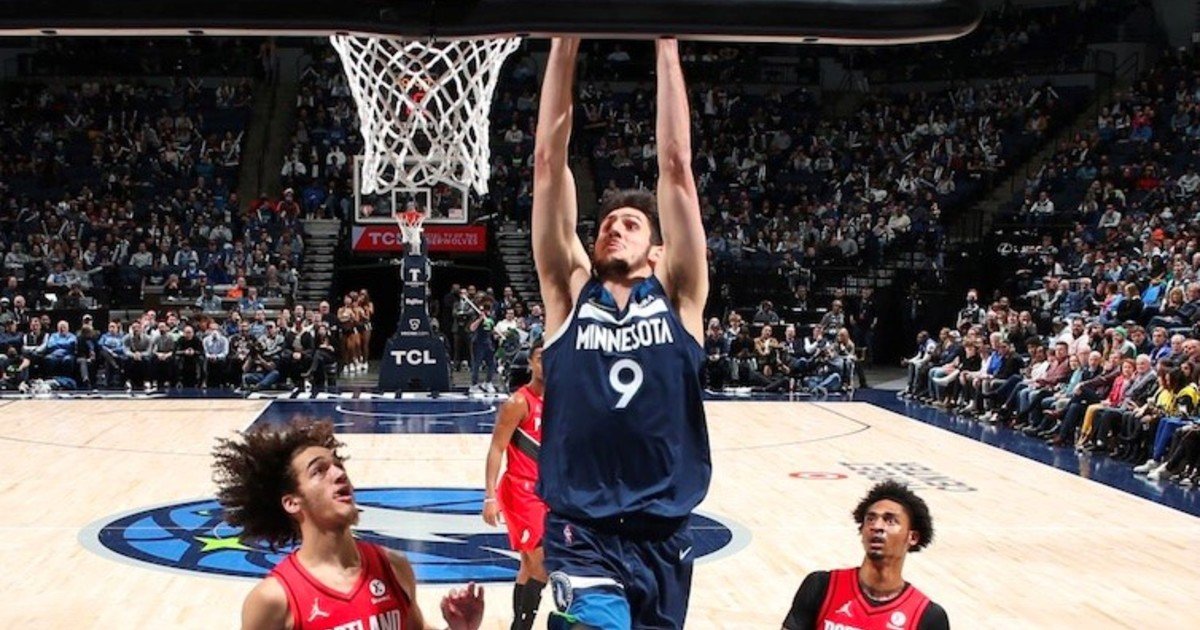 Karl-Anthony Towns had 27 points and 13 rebounds in the Minnesota Timberwolves win over the Portland Trail Blazers by double figures for the second time in three days by defeating them 124-81 Monday night. The game was attended by Leandro Bolmaro, who scored two points with an unforgettable dunk in 8’51”. The Cordovan nailed a dunk that quickly went viral. His numbers from him? 1-2 in doubles, 0-1 in triples, a defensive rebound, an assist and a loss.

Malik Beasley, meanwhile, added 19 points and Naz Reid had 18 with 11 rebounds off the bench for Minnesota. Towns’ effort came in less than three quarters as he and most of the Wolves’ starters were given rest in the fourth quarter with control of the game in their hands. Towns even joined the local crowd in doing the wave off the bench as team fans reveled in the landslide victory over Portland. Patrick Beverley joined in the fun by throwing T-shirts into the audience during the fourth quarter.

Monday’s game came two days after the Wolves outscored Portland by 15 points at the Target Center. Towns had 36 points that day. Minnesota matched its best streak of the season with five wins as it looks to keep pace in the Western Conference. Brandon Williams led the Trail Blazers with 27 points. Portland lost five in a row after winning four in a row.

And how did Campazzo do?

Nikola Jokic posted his second triple-double in two nights with 32 points, 15 rebounds and 13 assists to lead the Denver Nuggets in a 131-124 win Monday over the shorthanded Golden State Warriors.

Jokic has hit triple-doubles in 11 of his last 23 games and leads the league with 18 this season. The current NBA Most Valuable Player came from adding 46 points, 12 rebounds and 11 assists in Sunday’s 138-130 victory over New Orleans. Facundo Campazzo, at 5’38”, missed his three triple shots and two free throws, although he contributed an assist and a steal.

Monte Morris and Jeff Green each had 18 points for the Nuggets, who have won 11 of 13 and are 13 games over 50% for the first time this season. The Warriors played with a reduced squad after manager Steve Kerr announced that Stephen Curry, Klay Thompson and Andrew Wiggins would miss the game to rest. Andre Iguodala and Gary Payton Jr. were unavailable with injuries.

Jordan Poole had 32 points and Moses Moody 30 for the Warriors, who lost their fifth straight game and seventh of eight games. Golden State fell to 0-3 against the Nuggets this season.

Monday’s game made up for a Dec. 30 game postponed due to a COVID-19 outbreak that left the Nuggets without eight healthy players, the league minimum to play the game. But it caused the Warriors, who also play in Denver on Thursday, to play at altitude twice in a row. Golden State plays Tuesday against the Los Angeles Clippers in San Francisco.