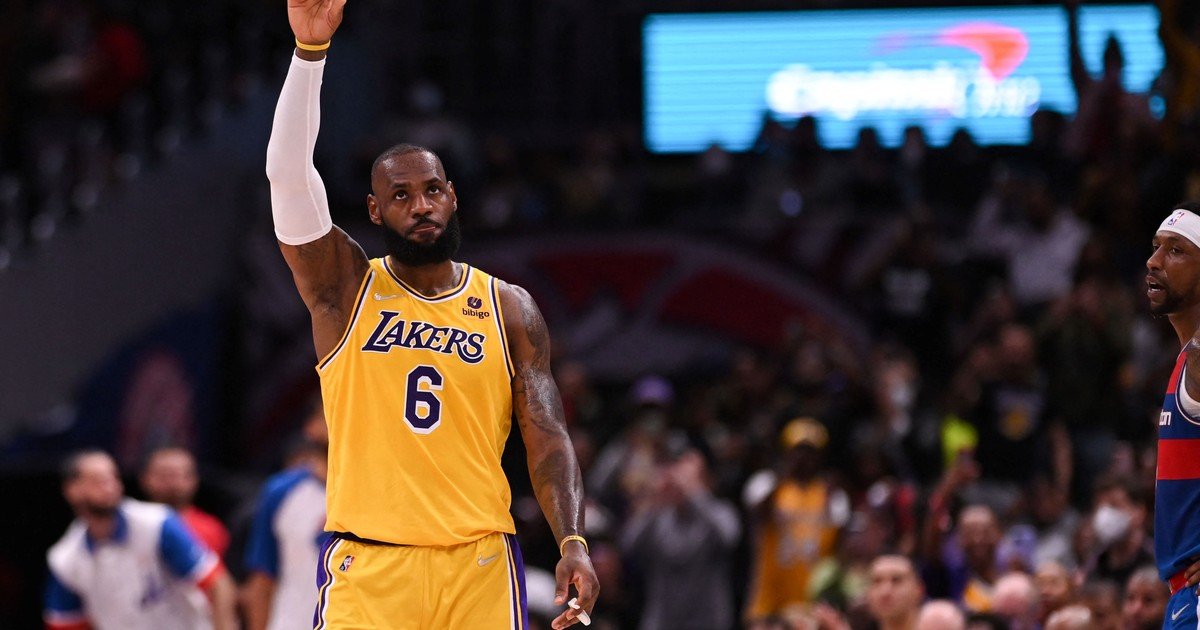 Lebron James He surpassed Karl Malone for second place on the list of the greatest scorers in NBA history. Now, only Kareem Abdul-Jabbar surpasses him. Howeverhis Lakers squandered another spectacular performance by their star… Los Angeles suffered a new defeat this Saturday by 127-119 against the Washington Wizardswho overcame a 16-point deficit.

James failed to properly appreciate his milestone, following the loss. “Obviously, there will be a day when I can look back on this moment. But for now, I can’t separate the feeling that I have from this,” he explained. “We had a great opportunity to get some momentum into the season.”

James had 38 points, while Russell Westbrook added 22 in his return to Washington. However, a smaller lineup couldn’t stop Kristaps Porzingis. The 7-foot-3-inch (2.20-meter) Latvian scored 27 points, including 16 in the final period. Porzingis hit a 3-pointer with 38 seconds left to put the Wizards up by six. James was unable to respond at the other end of the court. Washington outscored the Lakers by 34 points to 20 in the fourth quarter.

Now, James trails only Abdul-Jabbar’s 38,387 points, the all-time leading scorer. He entered the game 19 points behind Malone, who had 36,928. The record seems within reach of Jamesif he stays healthy.

“I don’t allow myself to think about it. I’ve always played this game like that, for years, and these things have just happened organically, playing the right way,” James said. “I hope to achieve that at some point in my life. career, but I won’t think too much about it.

LeBron, an out of series. (AP)

After getting six points in the first period, the star shone in the second, with a performance that included a dunk and three triples. The last of those 3-pointers allowed him to catch up with Malone. He outscored him with 5:20 remaining in the third period on a layup.

Minnesota crushed the champion with a little bit of Leandro

In Minneapolis, with the accurate guidance of center Karl-Anthony Towns, the Minnesota Timberwolves kept full control of the game to defeat the champion Milwaukee Bucks with a score of 138-119. The Argentinian Leandro Bolmaro He participated in 2’29” of the game (the last ones, when he entered for Jordan McLaughlin), with a failed double shot and a personal foul.

Towns kept his scoring streak going with 25 points for the Lobos, who also took advantage of the absence of the Greek Giannis Antetokounmpo by the defending champions. The Wolves star, who has averaged just under 40 points per game in three appearances this week after a monster 60-point outing on Monday, was 6-for-12 from the field and 4-for-6 from 3-point range with 11 rebounds and five assists at the Target Center in Minnesota.

Another great game from Towns for the Wolves.

The 26-year-old’s form has helped the Timberwolves post a four-game winning streak, wins that keep the club firmly in the hunt for an automatic playoff berth. Saturday’s victory leaves the Wolves in seventh place in the Western Conference standings, tied with Denver in wins with 42, but the Nuggets have one loss in hand. Meanwhile, the reigning NBA champion Bucks fell to third place in the Eastern Conference standings at 44-27.

Milwaukee’s loss was made more challenging by news that Antetokounmpo was out of the starting lineup with sore knees. Minnesota duly prevailed from the start, outscoring the Bucks by an identical 34-28 margin in each of the first two quarters to lead 68-56 at halftime. They subsequently built a 24-point lead late in the third quarter, effectively ending the contest down the stretch.

Giannis Antetokounmpo saw him from the outside due to injury.

Towns was backed up with 25 points also from Anthony Edwards, while D’Angelo Russell added 16. Taurean Prince and Naz Reid each contributed 14 points off the bench. Stars Khris Middleton, Cuban-American Brook Lopez and Pat Connaughton each finished with 15 points for Milwaukee.

The program for Sunday