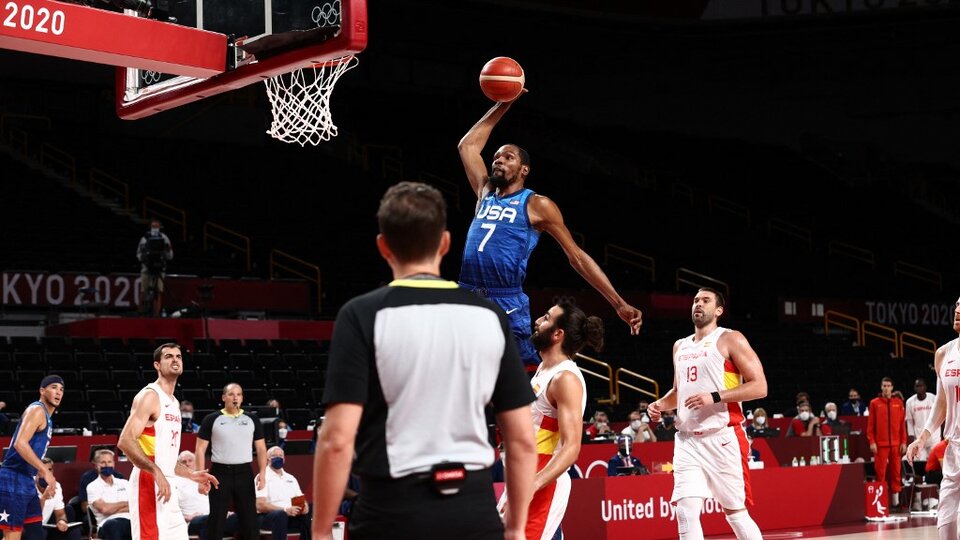 In a true world basketball classic of recent times, United States defeated Spain 95-81 this Tuesday morning in the Tokyo 2020 basketball quarterfinals and left Europeans without a medal for the first time since Athens 2004 (silver in 2008 and 2012, and bronze in 2016). Thus, the supremacy of the North Americans over the Spanish in Olympic events rose to 12 wins against none and now they are waiting for the winner of the crossing between Argentina and Australia, from 9, to meet your next rival.

After a very bad start, those led by Gregg Popovich had glimpses of “Dream Team” from the second half, with a remarkable movement of the ball to always find the shooter open and putting pressure on defense a Spain that depended exclusively on Ricky Rubio, author of some 38 explosives (9/13 in doubles, 4/7 in triples and 8/8 in free).

The Spanish thing was much higher during the first half although the scoreboard did not finish expressing it like that (43-43 at halftime). With a great performance from their point guards, Ricky Rubio and Sergio Rodríguez (16 points), and the remarkable defensive impact and rebounds of internal Willy Hernangómez (10 points, 10 rebounds and 3 blocks), they exposed the various shortcomings of “Team USA”: lightness in the brand, lack of centimeters on the board (42 Spanish rebounds against 32) and total dependence on external release.

The maximum Spanish advantage was 11 points (40-29) but the remainder of the last minutes allowed the Americans – always capable of turning on whatever the context – to match the story. Kevin Durant stood out with 12 points.

The USA woke up.

But the US completely changed the script in the third quarter, with impressions worthy of a “Dream Team”. They ended the holidays in defense and showed an excellent movement of the ball to make the Spaniards run from one side to the other, always managing to find the free shooter to start the hail of bombings: there were 4 consecutive triples (with 3 from Durant and one from Booker).

The new maximum advantage happened to be American, by 16. Spain paid dearly for the presence on the pitch of the veteran Gasol brothers. Coach Sergio Scariolo took note and his pulse did not tremble to seat them. Marc (36 years old) played 10 minutes in which his team lost by 17 points, while Pau (41) was only 6 minutes. The youth of Hernangómez and the young man of 19 years and Nigerian parents Usman Garuba was taking place.

But it was difficult for the inmates duo to make a dent in the painting of the United States as in the first part. Popovich had already adjusted the nuts and the proposal was to let Rubio do what he wanted, except pass the ball. The brand new point guard of the Cleveland Cavaliers, one of the best passers in the world, closed the game with 20 shots to the basket, only two goal passes and four losses.

The difference in this matter was overwhelming: 28 assists for the US and 12 for Spain. This explains a large part of the triumph of the Americans, who knew how to extinguish the Spanish comebacks of the second half with a remarkable triple effectiveness: 9/15 in the set (60% effective) against 4/17 in the first half (24%).

Kevin Durant he led his team with 29 points (6/10 in doubles, 4/7 in triples and 5/5 in free). The base Jrue Holiday He stood out with 12 units, 5 assists and his defensive impact, reflected in the +20 that his team took with him on the court.

Earlier, Luka Doncic’s Slovenia had no problem leaving Germany by the wayside, with a 94-70 victory. From 5.20 am France and Italy will collide, to solve the rival of the Slovenians.

As in the previous presentation, the star Doncic was not his team’s top scorer, since that honor belonged to the super effective Zoran Dragic (27 points, 6/6 in doubles, 5/7 in triples and 6 rebounds). The Dallas Mavericks star stood out anyway with 20 points (6/11 in doubles, 2/7 in triples and 2/2 in free), 11 assists and 8 rebounds.

On the last date of the group stage against Spain, the top scorer had been Vlatko Cancar (22) while Doncic added 12 (0/2 in doubles, 2/5 in triples and 6/11 in free), 14 rebounds and 9 assists. All proof that the Slovenian outfit is capable of involving its supporting cast if Doncic so wishes.

The point guard, who broke it in his debut with 48 points against Argentina, he averages 26.3 points, 10 rebounds and 8 assists so far this tournament.