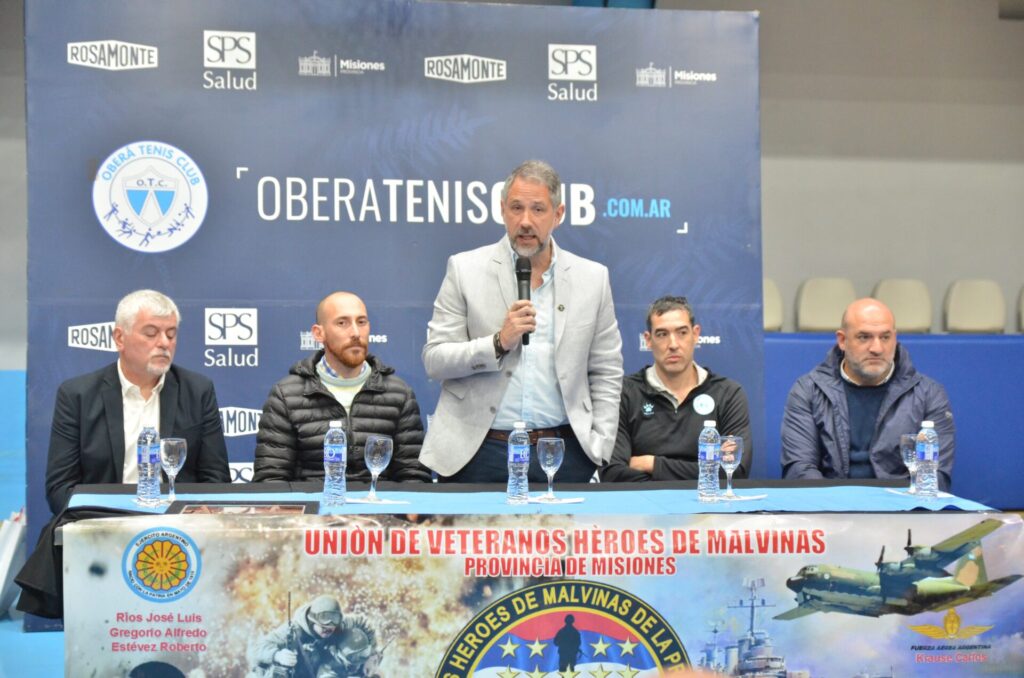 Oberá Tenis Club (OTC) presented its team, the new clothing and then triumphed in the friendly 86-64 against União Corinthians. It was a day full of emotions, because in this season, the missionary representative pays homage to the Obereño heroes, fallen in the Falklands War.

A few days before the start of the South American Basketball League (LSB) and the National League, the missionary representative in the highest category of the orange sport, made his presentation to his people.

In the first instance, the words of welcome were pronounced by the President of the institution, Dr. Sergio Luis Feversani, who was moved by the presence of relatives of the heroes of the Falklands War, on the 40th anniversary of that feat; «With this we want to recognize our neighbors who left their lives, for their ideals and leave our young people a message. Likewise, the shirt has an interweaving of tea and yerba leaves, primary products that are the axis of the economy of our land, that land that Major Carlos Krause, Corporal José Luis Ríos, Private Alfredo Gregorio and Sailor Saturnino Sanabria. Honor and Glory to the Ex-Combatants! and best wishes to our team this season.”

Who accompanied, is the Mayor of Oberá, the lawyer Pablo Hassan; in his speech he highlighted the historic event that will take place with the participation of OTC in the South American League as it is the first professional team to participate in a competition of these characteristics, «It is something very important, and that in addition to playing in our city. This marks the great work that the Board of Directors has been developing.”

Subsequently, tributes were carried out to relatives of the obereños who died in the Malvinas war, each of them received a plaque and a t-shirt, where a shield with their name and surname is stamped.

Then, the presentation of the coaching staff and players was made, who wore the three versions of shirts that the team will have, the main one in light blue, the second white and a third black.

After the protocol, the friendly match was played against União Corinthians from Brazil, which was won by OTC 86-64. This Saturday, but behind closed doors, both teams will meet again at the Dr. Luis Augusto Derna stadium.

Basketball: OTC presented its team for the season