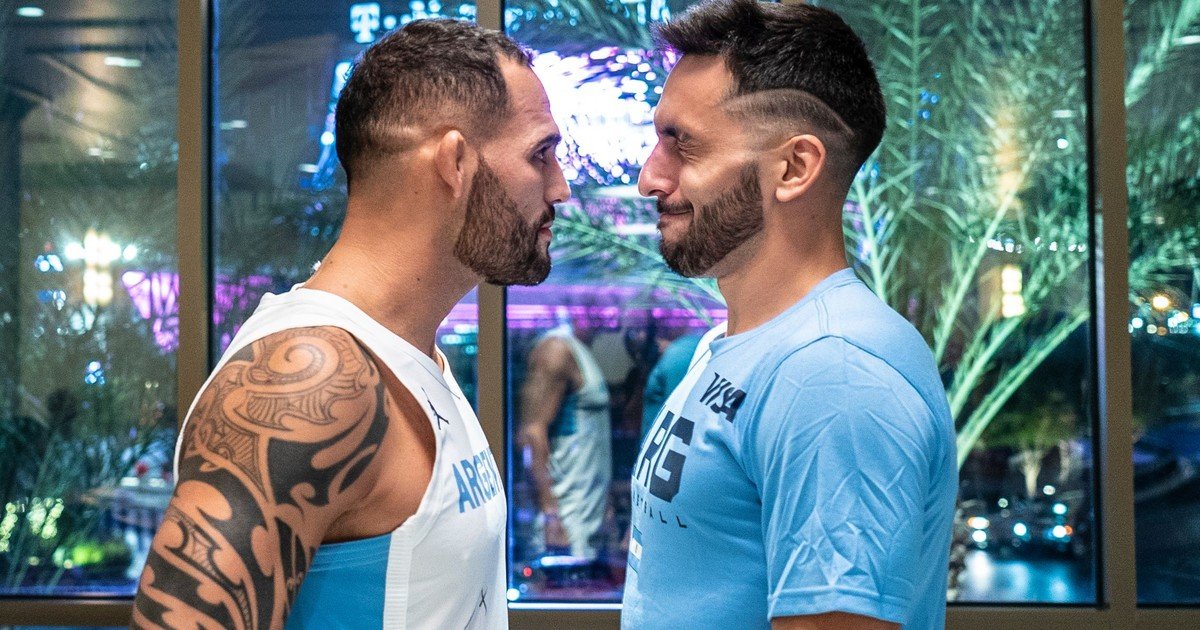 Santiago Ponzinibbio visited on Friday at Argentina basketball team at the hotel in Las Vegas where they are doing the preparation for the Tokyo Olympics. Uninhibited and relaxed, the kid from La Plata neighborhood who is now a ufc star worldwide caused fury between the players.

Santi and the team, on guard. (CAB Press)

“How are you guys? How good that I could come to meet you, I love being here. I lived outside for a long time and meet compatriotsso far from home It makes me well“, he commented after greeting each member of the team personally.

“I came to comment on the fight because I’m still recovering from the battle of a month ago. It was a war, we killed each other. It was even said that it was one of the best fights of the year“added Ponzinibbio before the consultation of Campazzo on whether he would fight on the evening of the great clash between Mcgregor and Poirier.

Santi, made reference to his fight against Michael Baeza on June 5, at the UFC 28 evening in Vegas: “I started to move a little, because i’m good at boxing, they saw, but I started to rollerblading, the rival began to me kicking the legs and couldn’t get out. When the round ended, I had to make a change. They saw that in high performance is seconds, you have to click. I stopped moving and playing the technician, and inside I said ‘here you have to put Argentine eggs‘. And well, we We killed pineapples but we won on points, 29-28“, he recounted and received the ovation of all.

The dialogue after he went back to basketball and Santi wanted to know how important friendlies are before traveling to Tokyo. “They are tough, right? Especially the United States, I imagine. It’s always cute play against the best, go playing to compete and catch the timing, “he said.

Later, Campazzo gave him a gift: “We signed this shirt for you”, to which Ponzinibbio reacted like a baby: “Noooo, look how good, they signed my shirt. I put it on now, today I’m going out with this one “He said after putting on the blue and white and starting to jump and throw some fists in the air, in typical boxer action.

In the end, they all put smiles. (CAB Press)

After the exchange of words, the players and Ponzinibbio They went to the steaks. Campazzo was the first to stand up to the fighter: “I’m going to rip your head off”, threw and could not help making Ponzinibbio laugh, who after the photo made a neck brace what Facu was not amused at all.

Then it was the turn of Tayavek gallizi, the 2.06 meter pivot sand he planted Ponzinibbio who laughed: “Luckily he plays basketball.”

The video of the meeting