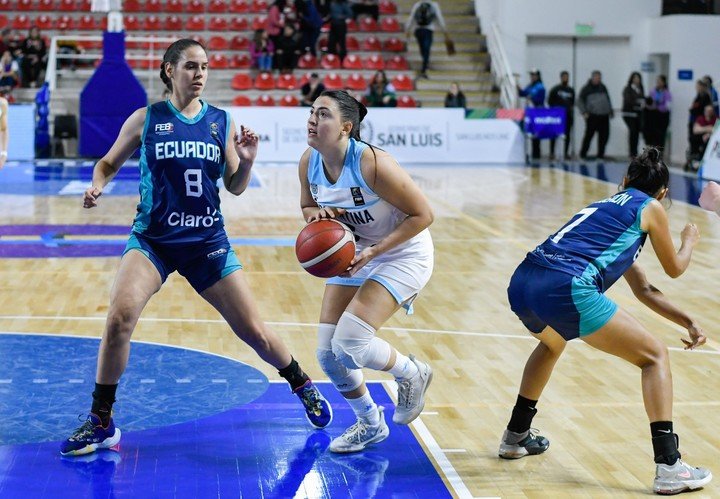 Argentina defeated Ecuador 64-37 for the second round of the South American tournament in San Luis and remains leader of Group A with two wins. This Wednesday at 8:30 p.m. the group will close against Paraguay looking for the pass to the semis and the AmeriCup 2023.

As in the opening day on Monday (79-44 to Venezuela), the team was the figure of the night and was evidenced not only in the display on the field but also in the numbers recorded on the match sheet. The collective office of those directed by Gregory Martinez was seen in the outstanding performances of Luciana Delabarba (important again, with 10 points plus 5 assists), Melissa Gretter (6 assists and 5 rebounds), candela gentinetta (8 points), Camila Suarez (8 units) and Andrea Boquete (8 points).

The National Team was dominant defensively. Although the match began with an attractive round trip between the two, Argentina began to take advantage of the quick transition and with Gretter as generator, from his dynamism and his aim to assist surgically both at short and long distance. This team stands out for passing the ball.

At the end of the first quarter, the selected team found a small light (17-13), managing the ball and consolidating in the background to continue escaping in the second episode. Thus, he barely allowed just 18 units in the first half, going into the long break with an interesting advantage (29-18).

The same formula was maintained at the start of the second half, with a lot of game circulation and with an Argentina that continued to show depth in its rotation. That’s why he took a partial from 17 to 2 in the third quarter, escaped to more than 25 points difference and ended up breaking the game. Argentina closed this chapter 51-27, then impacting a passage from 13 to 10 in the last quarter to put final figures to the result.

Another win for women’s basketball