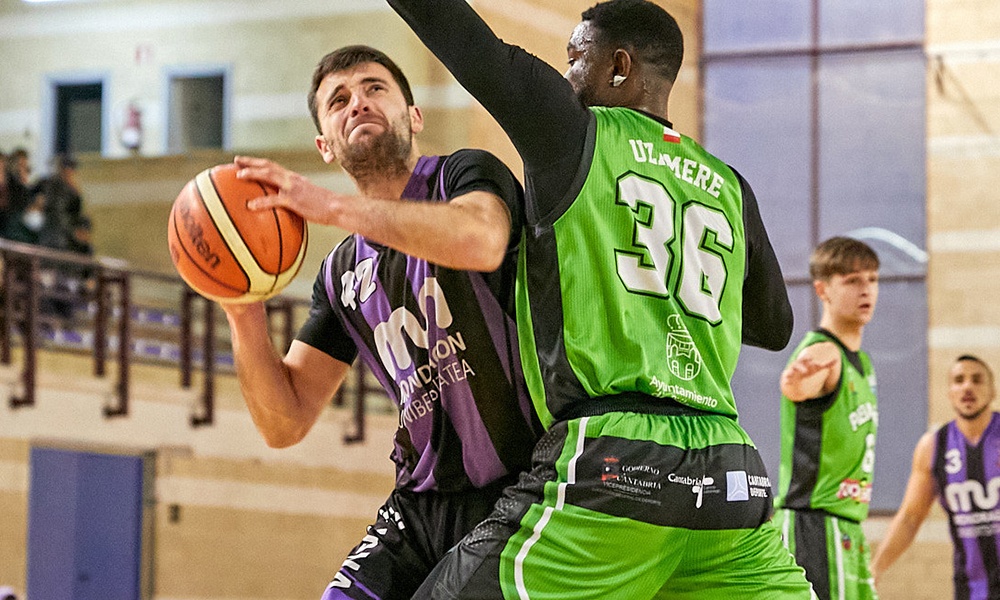 Last Saturday Mondragón Unibertsitatea, current champion of the AA group of the EBA League, prevailed on the court of Santurtzi SK, outstanding leader this season in which only one other team has managed to beat them, Getxo SBT. With this victory, the team coached by Eneko Mata is finally among the top three, which they have been getting closer to as the season progressed. Although the objective of being first is almost impossible, they now face the last five days with their minds set on reaching the Promotion Phases to LEB Plata that they already played last year. We talked about all of this Andoni Atxaa fundamental player in Ointxe, where each season he has been progressing remarkably and that despite his youth (1999), this year it can no longer be present in our selection of the best U22 in the category (born since 2000). Ante Santurtzi was one of the key players in the victory, having missed a couple of games very recently due to injury.

Basketball Zone – How was the injury that forced you to stop at the end of February?

Andoni Atxa – In the match three weeks ago against Piélagos I received a big blow to the calf. At the time it hurt a lot but being hot I continued playing, but the next day I couldn’t even walk. That’s why I missed the next two games, which were Becedo and Valle de Egüés. Last week I was able to play a few minutes in the game against Nissan Grupo de Santiago with some discomfort, but I’m back at 100%.

ZdB – What a season you are having! Do you also feel that each year you are better?

AA – The truth is that I am quite happy with the season I am doing, every year I have a slightly more important role in the squad and things are getting better and better for me. The club and the coaches I’ve had have always trusted me a lot and have helped me in everything I’ve needed. In addition, over the years I’ve been lucky enough to play with great players with a lot of experience in FEB leagues and I’ve learned a lot from them. in fact I keep learning new things in each training.

I am still a young player and I am aware that I have many aspects to improve, so I have to continue working with the same enthusiasm and enthusiasm as before.

AA – The Solares match at a statistical level I think it is my best match in the EBA league, it was a rather strange match, in fact the first part I did not feel comfortable on court, the shots did not enter me and the sensations were bad . But in the second half everything changed, I began to feel better on the court and the shots began to go in, we also took the victory in a game that seemed lost, forcing extra time `in extremis´ in a field as complicated as the of Solares.

ZdB – We are seeing an Andoni Atxa this year who threatens much more from the perimeter, in line with what the whole team does. Are you doing a specific job in this sense?

AA – Before the season started I spoke with my coach, Eneko Mata, about this matter. He told me that he had to shoot more than three shots to force the defender out to the 6’75 line and then decide whether to shoot or penetrate; if you are not a threat on the shot, the defender has it very easy to defend you. That’s why this year I’m shooting more three-point shots, it’s something I’m specifically working on and I have to keep doing it.

Shooting from three is one of the virtues of the team, we work on it a lot during the week with many shooting exercises, we also have specialists like Martxel Balanzategui, Alex Lorenzo, Txomin Ayastui… The truth is that we can all shoot and score from three, this way the defense has to open up and there are more spaces in the zone.

ZdB – Seeing your progress… are you thinking of making the leap to the LEB?

AA – Personally, I would like to make the leap to the LEB one day, it doesn’t have to be soon, but I really like basketball and I think living the experience of playing in a LEB Plata could be good. But hey, I’m very happy where I am now, I’m really enjoying basketball in a team that we’re all friends with and there’s a very good atmosphere. As I said before, I’m still a young player with a lot to work on and improve, so I’m going to keep enjoying myself and learning day by day and what has to come will come.

ZdB – In this sense, we wonder if you are “tied” to Euskadi for study or work reasons.

AA – Last year I finished my degree in Business Administration and Management and this year I am studying a master’s degree that ends in June.

ZdB – Going into the situation of the team, throughout the year you have had several important casualties, Buesa’s being the most notable. How has it affected you in this season in which it seems that you are going further after some unexpected defeats that have taken you away from your head?

AA – Yes, the truth is that we have had several important casualties throughout the season that have weighed us down a bit and have not allowed us to have that regularity and perseverance that we need to be fighting for that first place. Sergio Iglesias has barely been able to play all season due to shoulder problems, Martín has also missed several months of competition due to back problems and Imanol Orue broke his finger and was KO’d for a couple of months. You have to use it as an excuse, injuries are part of the sport and you have to deal with them as such, plus the second team players have helped us a lot to strengthen the team and they’re fundamental. Here you can see the good work that the club is doing in the quarry, this year a few youth players and the second team have already debuted with us, doing very well.

ZdB – There are five rounds left and the fight to enter the Final Phases is very intense. The first position seems impossible, even though you have won both games against Santurtzi. How do you see the face to face with Cantbasket, Getxo and Baskonia?

AA – The first position seems almost impossible, but we are going to go for it until the math tells us otherwise. Santurtzi is carrying out an exceptional campaign and is there on its own merits. As for the second and third places, we have five finals ahead of us, the good thing is that we depend on ourselves, but right now there is no easy game in this league, so a complicated but at the same time beautiful end is expected. Cantbasket and Baskonia have very large and high-quality squads, and Getxo is a very difficult team to win that, with the strength of the group, is having a great season.

ZdB – I imagine that you will have marked in red those last two games of the season in which everything seems to be decided.

AA – The matches against Cantbasket and Baskonia are going to be fundamental, we are going to go with everything to try to win them, but I think we are making a mistake if we think about those matches from now on. The following Sunday we have a very complicated game against LogroBasket that we also have to take out, so now we have to think about having a good week of training and giving it our all on Sunday.

ZdB – Remaining 2nd or 3rd you would still have to continue fighting with the teams from group AB to get into the FF, but I suspect that you can’t think about it either.

ZdB – Is there any game that you have lost this season that you think “wow, that’s where we missed the first position”?

AA – This year we have lost a game that a priori wasn’t meant to be, but here nobody gives anything away and everyone wants to win, plus all the teams have great players who make things very complicated for you. Above all, I remember the game we lost at home against Easo and the game we lost against Becedo, but it’s no use looking back, we have to focus on what’s to come.

ZdB – How was the experience of the Final Phases last year?

AA – Last year’s promotion phase was a great experience, we couldn’t achieve the objective of the promotion but we had a great time. Perhaps some of us players were guilty of never having played in a promotion phase, but the team fought until the end and gave everything they had, we couldn’t ask for more.

Hopefully this year I can also play it and fight for that promotion, it will be difficult but I am sure that the team will give everything in its power to achieve it. Let’s get it or I’m not going to die with this team!

Andoni Atxa (Ointxe): “We have five finals ahead of us”