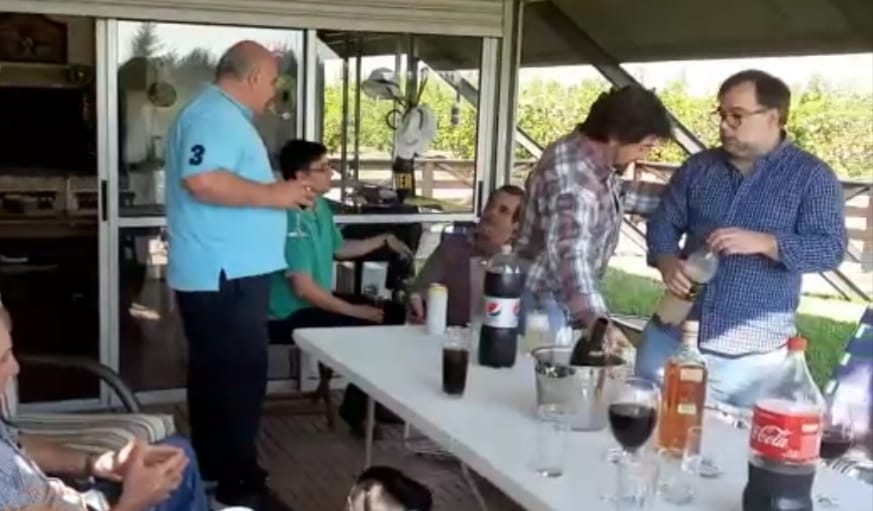 By Julio Aguirrezábal
Several political leaders from the National Party, the Colorado Party and the Independent Party, would have met last Saturday to outline the conformation of the multicolored coalition in our department, leaving aside the local referents, Carlos Albisu and Germán Coutinho. The event was thus reported by the Diario Salto portal, who also released a video that shows part of the meeting.
According to what was reported by the portal, the meeting had the “objective of forming a new departmental coalition, which would have the objective of overthrowing Albisu and Coutinho, who would have put them aside before the abusive” distribution “of charges that both carried out in CTM and other State institutions ”.
According to information in the possession of CAMBIO, it was carried out in the farm of Francisco Blardoni – former candidate for mayor for the National Party – located on Saturnino Ribes street, on the outskirts of our city.
In addition to the host, for the National Party there were also the main leaders of the 180 list, Pablo Bonet and Pablo Williams; the Colorado Party would have been the sector that contributed the most leaders to the meeting, Miguel Feris, Daniel Galliazzi, Francisco Merino, Julio Franchi and the journalist from the newspaper El Pueblo, Adrián Báez, would have participated. For the Independent Party was who was a candidate for deputy in the last national elections, Hoover Rosas. The communicator Sualina, linked to the portal that broke the news, was also part of the meeting.
Although yesterday Sunday from the Citizens of the Colorado Party sector it was reported that the main objective of the meeting was to coordinate actions “in defense of the Law of Urgent Consideration”, our sources confirmed that the true intention of the meeting was the formation of a bloc within the multicolored coalition that competes against the main departmental referents, Carlos Albisu and Germán Coutinho.
A striking aspect is that from the Citizens sector, until a few days ago, they held lively meetings with Pablo Perna, as well as other actors, such as Franchi, Merino, and Galliazzi, with the aim of forming a sector within the Colorado Party, also to dispute the leadership of the party to Vamos Salto and therefore to Germán Coutinho. The other thing that is striking is that the differences would not be ideological or conducive, but based on charges.