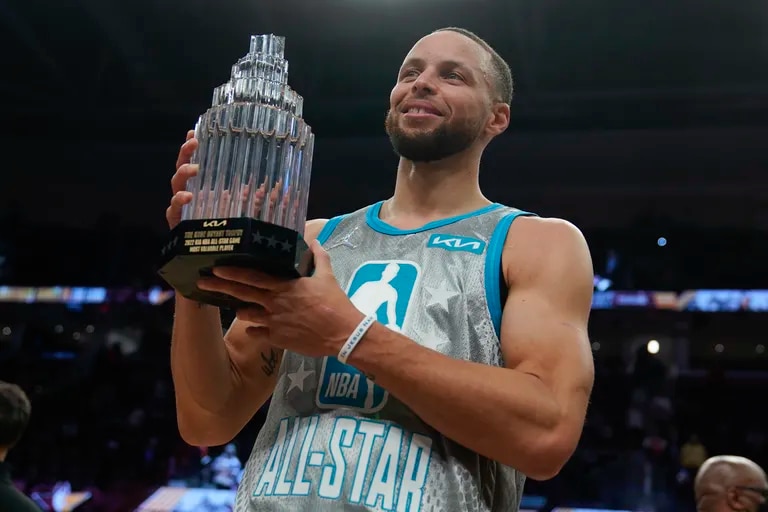 Everything that happens at the gala NBA It seems designed for certain actors. And when it comes to Stephen Currythe All Star Game It is a date that suits you in the best way. In the season that celebrates the 75th anniversary of the most powerful basketball league on the planet, the star of the Golden State Warriors broke a record and was chosen as the MVP of the game that remained in the hands of Team LeBron (he won 163-160 over Team Durant).

The Ohio-born man exhibited his best repertoire of long-distance shots in Cleveland. Curry fell just two points short of the record for the highest scorer in an All Star, a record held by Anthony Davis (52 points in 2017). The Warriors point guard was dispatched with 50 points with 16 triples.

Curry took every shot he could get his hands on to set the All Star Game record for 3-point shooting. the mark of 16 triples they leave far behind the record that Paul George had, who had scored 9 in the 2016 All Star. Such is the madness of what Curry achieved that he took 27 shots and scored only one double.

“It’s something special, obviously being back in Ohio. This is a very special trophy. I feel very honored and blessed” Curry said seconds after receiving the first Kobe Bryant Trophy for Most Valuable Player in an All Star.

A spectacular night in which Curry dominated part of the scene before the attentive gaze of a vast majority of the 75 players selected as the best in NBA history, who were in Cleveland: Jerry West, Rick Barry, Isiah Thomas, Dennis Rodman , Kareem Abdul-Jabbar, Jason Kidd, Dirk Nowitzki, Paul Pierce, Kevin Garnett, Allen Iverson, Magic Johnson and Michael Jordan.

A show with all the brilliance of the NBA and a Big Three made up of Antetokounmpo (30+12), Lebron James (24+8+6 and the winning throw) and Stephen Curry who became the third oldest player to win an All Star MVP after Shaquille O’Neal and Michael Jordan. All perfectly designed, the ultimate show.

All Star Game: Stephen Curry always has a record on hand to change history