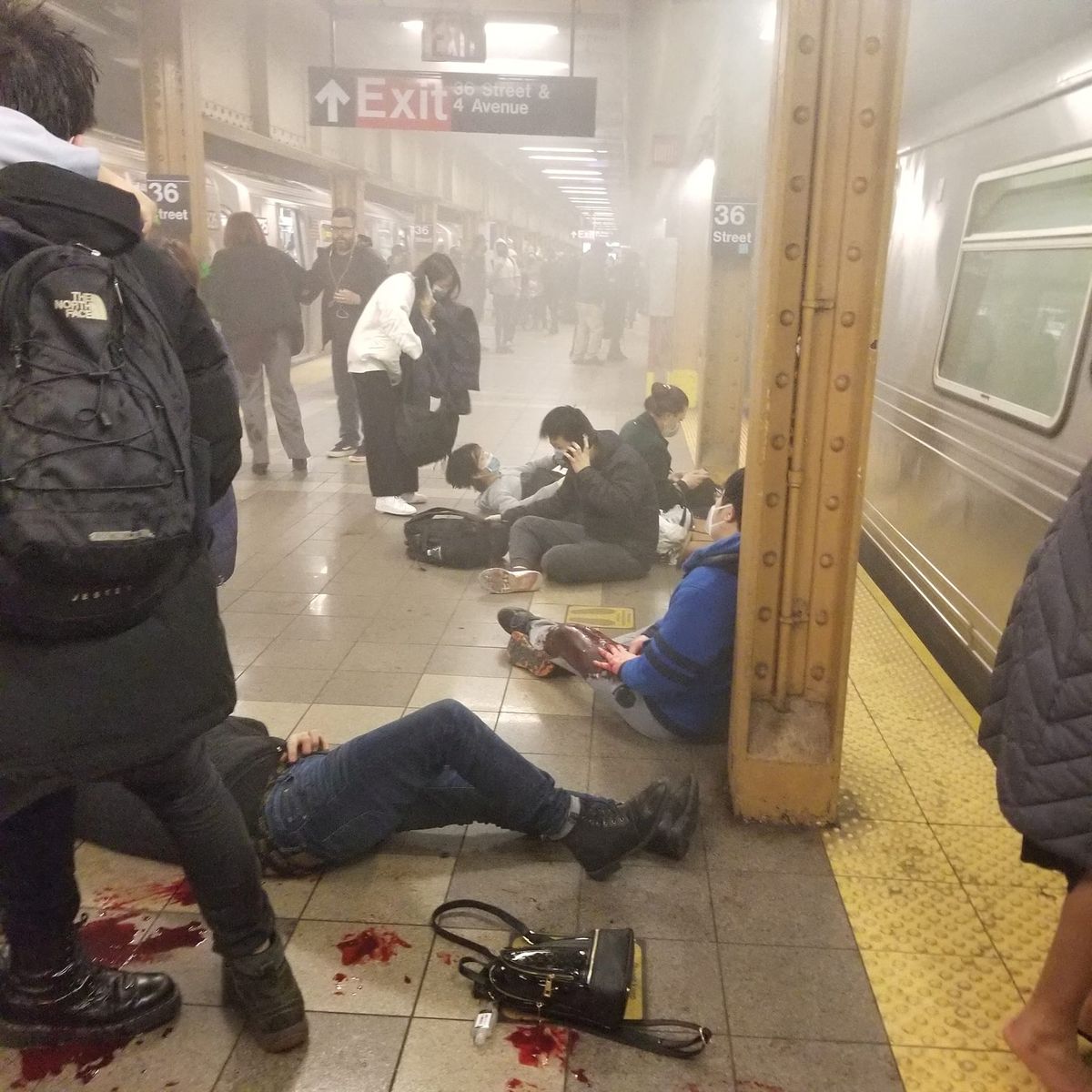 Twenty-three people have been injured this Tuesday, more than half by firearm, in a New York subway car. The event occurred at the height of rush hour, around 8:30 a.m. local time (six more hours in mainland Spain), shortly before the convoy entered the 36th Street station in Brooklyn, which serves three lines. The authorities have confirmed the existence of 23 wounded, 10 of them due to gunshot wounds, five of which are in critical but stable condition. Twenty passengers have had to be treated for smoke inhalation.

“At 8:27 a.m., police responded to an emergency call from a person who was shot on the subway” in the Sunset Park neighborhood of Brooklyn, a police source confirmed to Agence France Presse. The authorities asked citizens to avoid the area, cordoned off by fire trucks and law enforcement vehicles, in addition to a visible deployment of agents with heavy weapons that have sealed a perimeter of a dozen streets around the station. The police were looking for a black man 1.65 meters tall and weighing about 80 kilos, wearing a gas mask and a green vest – not orange, as initially reported – of those used in the construction sector. The authorities asked for citizen collaboration to try to locate him, including the images published on networks by witnesses to the attack. A rental van was also being sought that could be linked to the case.

Twelve hours after the event, the police have published the first images of the suspect, identified as Frank James, 62 years old. Authorities are offering a $50,000 reward for any information leading to his arrest. Armed with a 9-millimeter Glock pistol, which was found at the station, the suspect detonated two smoke bombs in the car and shouted loudly before starting to shoot: “Start running,” the newspaper reports. DailyNews in its digital edition. “He started shooting randomly in the car, which was overcrowded,” a witness told the newspaper; “He probably couldn’t see who he was shooting at, because there was very black smoke.”

The images published on social networks by some train passengers recall the commotion experienced on the platforms of the Tokyo subway in 1995 after a coordinated attack with sarin gas that affected 16 stations, although parallels cannot be drawn with what happened this Tuesday in New York, since the reasons for the shooting are still unknown. But it is not necessary to go so far back in time and space to remember the horror that was experienced in January at the central Times Square station, the Big Apple’s hub, when a homeless man with serious psychiatric problems pushed a woman onto the tracks waiting for the subway to go to work. The victim died on the spot, hit by the train.

Join EL PAÍS to follow all the news and read without limits.

The United States Attorney General, Merrick Garland, was informed of the event and is supervising the investigations, according to a spokesman, although the terrorist hypothesis is ruled out. Helicopter overflights of New York, a regular daily activity, have become more frenetic since the incident was reported. The police presence was more visible than usual on Tuesday even in areas of New York distant from the scene of the attack, with agents on horseback patrolling some streets in Manhattan.

The three metro lines that serve the station are experiencing considerable delays, a contingency that is added to daily traffic interruptions for security reasons, tragic events on occasions and breakdowns of all kinds. Traffic on three other lines that interconnect with those has also been affected. The New York Urban Transportation Authority (MTA), which manages the operation of the suburban, has not provided further details of the event. The mayor’s spokesman, Eric Adams – who tested positive for covid-19 on Sunday and works confined to his home – also declined to comment on the matter. From his residence, Adams posted a video message shortly after. “We’ll find him,” he said of the criminal. The president of the United States, Joe Biden, as well as the vice president, Kamala Harris, have been informed and the White House is in contact “with Mayor Adams and the chief police officer [de Nueva York, Keechan] Sewell to offer the necessary assistance,” according to the presidential statement.

The security measures around the mayor have increased, Commissioner Sewell said early at night, after confirming that publications on social networks related to the suspect link the figure of the alderman and the life of the homeless, against the that Adams has undertaken, according to opponents and activists, a crusade. The plan of cleaning of the alderman, very controversial, has been implemented since the end of February and aims to banish from the underground facilities all those homeless people who turn it into a bedroom on a daily basis. It was the response of the New York City Council to the tragic event in Times Square. Tuesday’s incident will also test Adams’ program against gun violence.

The local media, in a state of boiling, have described scenes of chaos at the station throughout the day. Juliana Fonda, a sound engineer who was traveling in an adjoining car of the N line train where the shooting took place, told the informative portal Gothamist what happened: “The reaction of the passengers was terrifying because they were trying to get into our car to escape what was happening in the queue of the train,” explained the witness. “None of us in the front of the convoy knew what was going on, but people were pushing each other, at a run, while trying to get into our car.” Fonda said he heard “a lot of loud explosions” and saw “smoke” from the affected car, likely due to the use of smoke bombs.

The mass flight, in droves, of passengers occurred when the train entered the 36th Street station, which suggests that the shooting had been triggered minutes before. Another witness, Joanna, shared photos of injured passengers lying on the floor of the car, while the station platforms filled with smoke. “Immediately two doctors appeared who were in other cars to help two people who were bleeding to death in mine,” the woman told Gothamist. “No one saw who did it, everyone thought it was a bomb. It was chaos.”

The episode adds even more pressure to the authorities to tackle the wave of armed violence Y the growing sense of insecurity on the streets, which makes it difficult to boost the recovery of the city after the pandemic, especially in the most disadvantaged neighborhoods. Monday, Biden announced new regulations to curb the proliferation of ghost weapons, or homemade, that are wreaking havoc on the streets of New York. On Friday, a 16-year-old girl died from a stray bullet, coming out of one of those handcrafted pistols, when she was returning home from high school. The alleged author, 17 years old, was arrested.

A shooting in a New York subway car leaves 23 injured