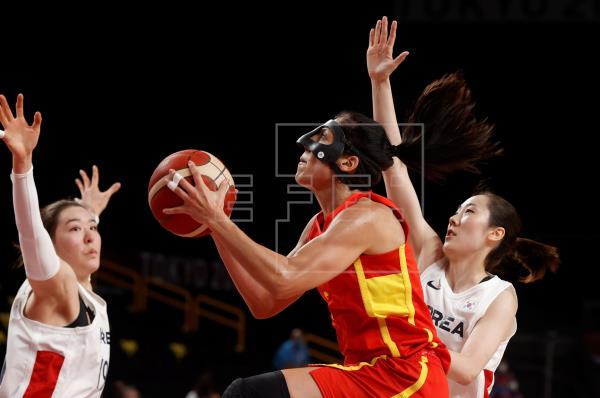 Faced with doubts, an early start and an uncomfortable South Korea, Astou Ndour was the answer. The Spanish-Senegalese pivot led the team’s victory (69-73), with a ‘double-double’ of 28 points and 10 rebounds, leading the response to rival pivot Ji Su Park and opening the final set in the last quarter in a complicated Spanish premiere.

In his best game in numbers of his career with the national team, Ndour was the beacon of a team strengthened by without the work of Laura Gil (16 points and 14 rebounds), also in highs. The victory puts the Spanish women where they wanted: with a victory before facing the European champion Serbia and the fourth world team, Canada, although without the difference they would have preferred.

The coach Lucas Mondelo warned before starting. “It is an uncomfortable team and more at 10 in the morning,” he told Efe.

It was. The 0-8 start was a mirage against a South Korean team led by Ji Su Park, a WNBA center who had 17 points and 10 rebounds that hurt due to his aggressiveness and triple inspiration (5 of 16, 31%), with Leeseul Park top scorer, 26 points.

And that in the beginning the Spanish did not seem to notice the unusual morning schedule, 10 in the morning in Saitama, making Korean star Ji Su Park suffer and running to the beat of Cristina Ouviña (0-8, m.4). However, when the WNBA giant woke up, Spain went into crisis and Hyejin Park finished from the perimeter for 15-16 at the end of the first.

The Koreans began to tighten in defense and sharpen the wrist, while Spain was weighed by precipitation and mistake. Until Ndour came to the rescue (22-24, m.15), but beyond her, Spain still did not work in attack and Leeseul Kang punished his mistake with 7 points in a row, putting the Koreans five points up (30-25 ).

An effort by Laura Gil approached Spain to stay in the ointment when the break arrived (35-33), just makeup for an inadvertent team in the triple (8 missed) and with a poor 33% in field shots while South Korea his wrist was greased from 6.75 meters (3 of 8, 38%).

Ndour adjusted his sight at half-time and broke the bad Spanish triplet fario, and the match turned into a duel with his Korean nemesis Ji Su Park, who was already going for 17 points. When they rested, Silvia Domínguez took power and with a 2 + 1 beat Spain (50-51, m.27). Between her and Laura Gil, the Spanish pushed to go to the last set ahead (53-54).

Again, Astou delivered the final blow. Willing to end an uncomfortable duel like few others for the Spanish team, she followed the path shown by Domínguez with a triple to add a basket and a 2 + 1. Once again, Silvia and Cristina Ouviña added baskets to complete a 0-12 run with an air of judgment (53-66, m.33).

Spain now only had to maintain the advantage against a South Korea that was seeing its options disappear, although it made up the result in the end, denying a more favorable difference that could be useful in the event of ties to those of Lucas Mondelo, who will return to play on Wednesday against Serbia (17.20 CET, 10.20 CET) and will close the group stage on Sunday in the morning session against Canada.

Incidents: match of the first day of Group A of the women’s basketball tournament of the Tokyo 2020 Olympic Games, played at the Saitama Super Arena (Japan), without spectators due to the sanitary measures against the coronavirus pandemic.