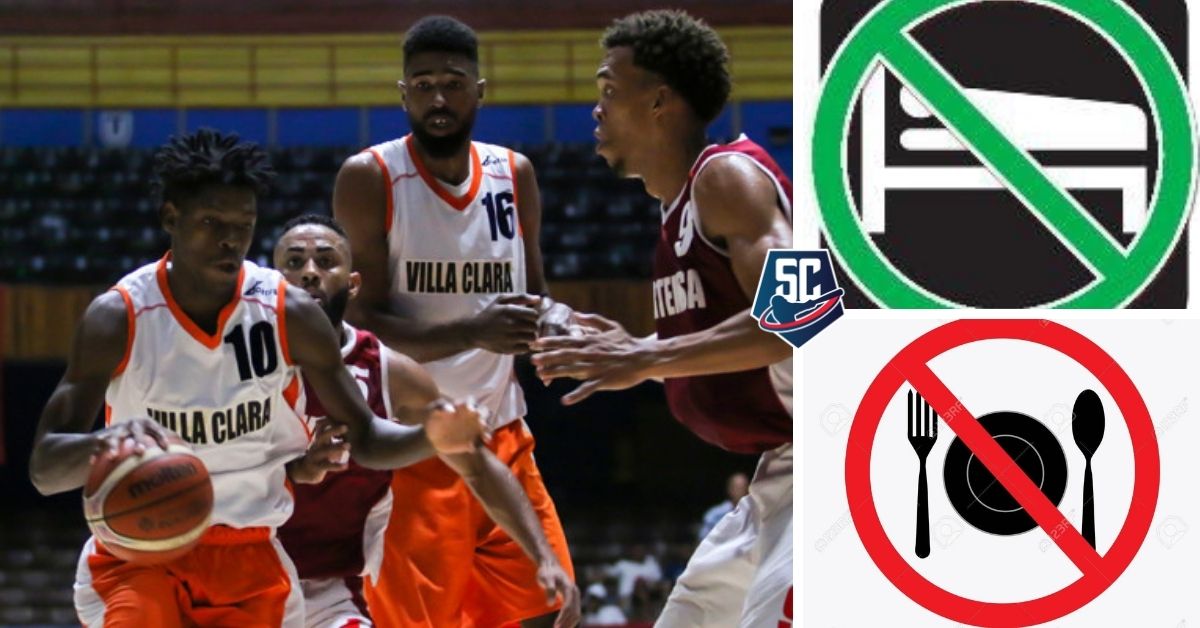 The complex economic situation that Cuba is experiencing at the moment is also present in the attention to athletes, in this case to the players of the Villa Clara basketball team, two-time national champion, who spent more than four months without stable accommodation or food. .

According to a work published by Lázaro Ernesto Areas on the provincial television station Tele Cubanacánthe team, which began with two victories in four presentations, looked discouraged on the field, mainly due to the low level of attention received.

The journalist, with great courage and ethics, acknowledged that the team’s players were “swallowing dry” with the number of times the start of the Superior Basketball League was postponed “… when nobody faced them or they did not fulfill what was promised.”

It may interest you: Publicly DEMANDED the 11-12 year old team from Pinar del Río due to the controversial decision of INDER

When interviewing Mariela Fonseca Llanes, Provincial Director of Inder, she acknowledged that the team “feels a little disappointed, a little uncomfortable because of the treatment it has been given here in the province,” while explaining that “this is the situation that the country has, and in this sense we have to be a little flexible.”

“We also have situations, and right now Inder doesn’t have the budget to be able to solve the situations that sport has.”

Later, he explained that that day they had had a meeting with the main leaders of Inder, in search of a solution to the issue. And that “at least their lodging situation is going to improve.”

It may interest you: IT HAD TO BE SAID: The TRUTH behind the words of the Cuban Baseball Federation

For his part, Andy Bofill, one of the team’s mainstays, said that just on the day of the report “… the problem of lodging and food was resolved,” and that he hopes it will continue like this “so that the team in the end be from (place) one to four, and be better, for the good of the province and for the good of all.”

He then referred that they did not have the best conditions: “… very bad. But well, let’s hope that these three that we are here, or these four months, that everything will be fixed.”

The journalist stated that the LSB had been postponed twice before its start was delayed once again “due to budget problems.”

It may interest you: LAST MINUTE: Demand a response in the Provincial Match of the 11-12-year-old baseball team from Sancti Spíritus (+PHOTOS)

Another interviewee turned out to be Leonardo Maravilla Pérez, Provincial Commissioner of the discipline, who declared that basketball “is one of the main sporting events in the country, and thanks to that it was not suspended.”

He added that basketball has many followers and that after two years without national championships due to COVID19, “everyone was eager to see national basketball.”

The journalist also made reference to the three absences that the group has, with the departure of Yoel Cubillas (2.08 meters) and Sergio Machado (2.07) due to commitments abroad, one of the current tonics of Cuban sports, which has sought these formulas for athletes to improve their quality of life.

It may interest you: Discomfort and pain in children, parents and coaches due to INDER’s controversial decision

It is necessary to emphasize the importance that a report of this type reverts to the development of Cuban sports. Without putting lukewarm cloths, Lázaro Ernesto Áreas referred to seeking criteria and information from all the parties involved and/or affected, which is undoubtedly necessary and essential to show the existing problems in the country, since their due identification and criticism It is the first step towards its solution.

Cuban basketball had its moment of splendor at the 1972 Munich Olympics, when they achieved the feat of winning the bronzed metal, at the hands of Pedro Chappé, Ruperto Herrera, Tomás Herrera, Alejandro Urgellés and many others. Without ever having players as tall as those that other developed countries in Europe or the United States had, they gave an excellent demonstration at that time, which is still remembered by lovers of this sport who lived it.

In the 1990s, the Superior Basketball League was a spectacle that filled the arenas throughout the country, with the presence at that time of four teams (Western, Capital, Central and Eastern), where the brothers Roberto Carlos and Ruperto “El Junior” Herrera, Juan Leopoldo “El Helicóptero” Vázquez, Leonardo “Maravilla” Pérez, Lázaro “El Toro” Borrell, Ángel Oscar “El Ninja” Caballero, among many others who received the most creative nicknames in the history of sports Cuban, almost all from the voice of the great narrator and sports commentator René Navarro.

It may interest you: Demys Valdés exclusively: “Víctor didn’t send me to hit Freddy Asiel, nor was that fight prepared”

But most of these great players, who did have excellent performances in Central American and Caribbean events, left the country and Cuban basketball began to plummet.

WITHOUT FOOD or lodging: This is how the Wolves of Villa Clara started the Superior Basketball League